As the new Blackmagic Pocket Cinema Camera 4K has come closer to general release, I’ve started pushing myself to break away from Premiere Pro and really learn how to use DaVinci Resolve as an editor. I’m at the point where I know just enough to be dangerous, but I’ve still got a lot to learn. One of the things I’ve wanted to learn is multicam editing.

In these videos, photographer Alex Matravers shows us two different ways to sync up multiple cameras in Resolve for multicam editing. The first uses the audio recording from each camera to automatically align everything. The second shows us how we can sync multiple cameras without having to rely on audio at all.

Both methods are pretty straightforward. It’s a bit easier with audio, but doing it without isn’t difficult if you take a precaution or two while filming.

With audio, it’s simply a case of dragging the different camera angles into your media pool, selecting them all and choosing “Create new multicam clip using selected clips…” from the right click menu. When the dialogue box pops up, just tell it to use the sound for the “Angle sync”. The process then runs very quickly – much more quickly than I’ve experienced using the similar process in Premiere Pro or PluralEyes.

You just need a fast sharp action that can be seen by all of the cameras. You’ll often see people clap in front of the camera on low budget productions to achieve this. It allows each camera to see an action that’s immediately obvious to somebody looking at the footage when that action is happening. Add a marker to each clip at the exact moment this action happens, and when you tell Resolve to sync, just choose markers instead of sound for the Angle Sync.

From there, editing the multicam sequence is the same for both. Simply drag the multicam clip into your sequence, tell the preview window that you’re looking at a multicam clip, and you can click away while you play back the footage automatically cutting up the sequence as you go. 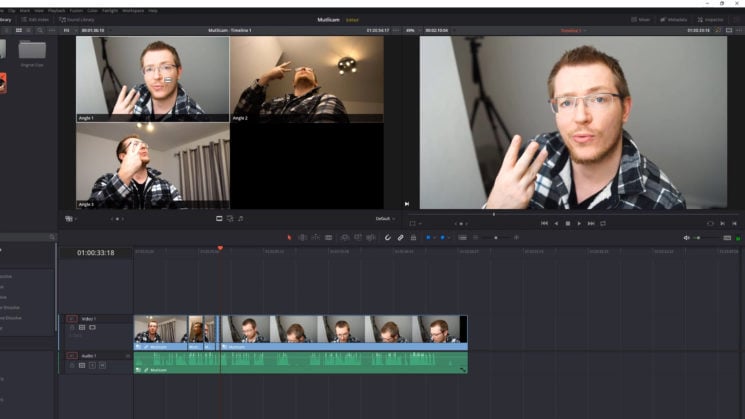 Alex pauses the sequence to make his cuts so that he can time them up with a little finer control, but you don’t have to. You can just leave it playing the whole time and click from one angle to another during playback. You can even use the number keys on your keyboard (the ones across the top, not the numeric keypad), to switch between camera views – although Alex says this feature can be a little temperamental.

DaVinci Resolve has come a very long way since I first started playing around with it back in version 11. It’s up to version 15 now, and the editing features have come particularly far. I tried a little multicam editing in those early versions, and it really wasn’t the best at all. To the point where I just gave up with it and went back to Premiere Pro.

It looks like automatic syncing for multicam has become much more reliable now, though.

If you want to check out more of Alex’s DaVinci Resolve tutorials and other videos, head on over to his YouTube channel.