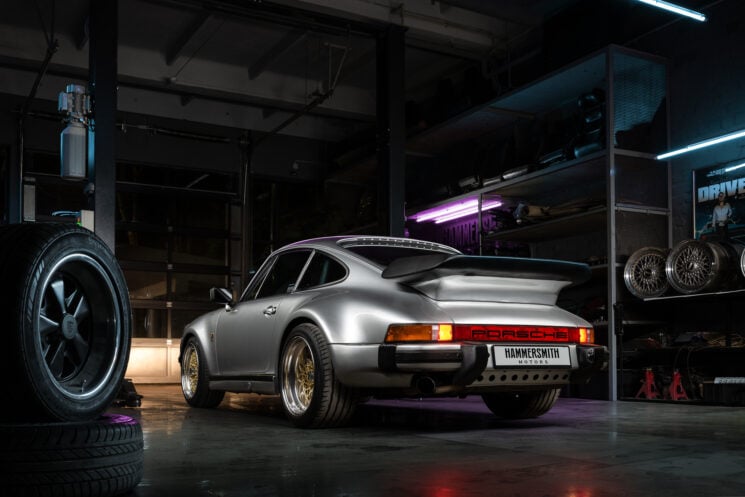 A car is never just a car, particularly a luxury car like a Porsche. Just as each image should tell a story, so does every car. One photographer who understands this is automobile light painter Dominykas Liberis from Vilnius, Lithuania. Every one of his images and car portraits oozes personality, elevating them from ‘just a car’ to each having a story of its own. We found out how he went about photographing this vintage Porche 911.

Some people see a car. A piece of metal with one main purpose – to take us from one point to another. I see a story. A story of a designer, fulfilling his deepest desires of creating a uniquely shaped vehicle; a story of a craftsman, modifying every running part and making a car that’s uniquely theirs; a story about an enthusiast, who adores the smell of petrol and sees driving as an absolute pleasure. Behind every vehicle is a person with a story.

Dominykas regularly shoots work for a local restoration garage in Lithuania (Hammersmith motors). “They had finished restoring this gorgeous 1976 Porsche 911,” he says, “the shop has a bunch of 80s and 90s memorabilia, like car posters and other cool stuff (you can notice the movie “Drive” poster on the wall near the car in the photo). So I figured I wanted to match that whole vibe and go with a more 80s themed colour scheme. You know, Miami colours, cyans and magentas. And the car suited those colours perfectly!”

The equipment used is simple for this technique. Dominykas used his standard camera and lens which he uses on most of his automotive photoshoots, The Nikon D800 and 24-85mm 3.5-5.6. He says “while this DSLR is becoming pretty old now, I still find it very usable for professional work, and its huge image sensor is a nice bonus.” Of course a good tripod is essential in this sort of work, Dominykas uses the Vanguard Alta Pro. Lighting was all done with a Yongnuo YN360 LED light wand.

For this particular shoot Dominykas first took a fairly flat ambient exposure to use as a background plate from which to work from later in post production (below). As you can see it is a fine exposure of a car, but there is zero atmosphere to the image. 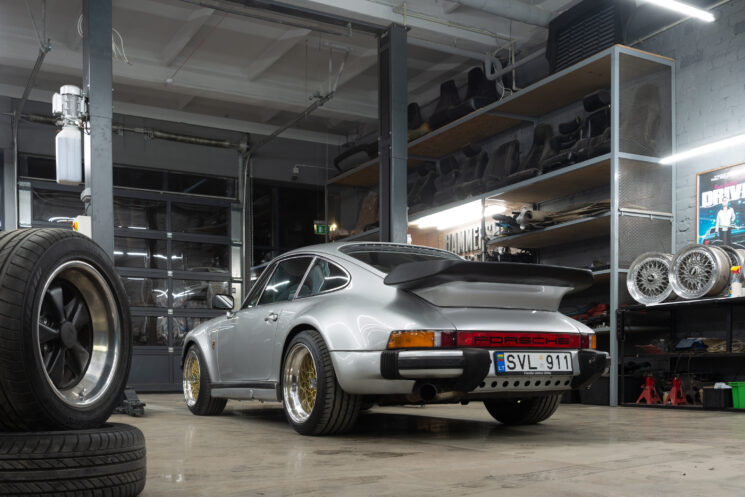 After this, the car is then lit in sections with the light wand in separate exposures of 6 seconds. The idea is to light up particular features that you then composite together in post production, using the background plate to work from. The general technique is shown in the following video:

If we go back to the Porsche 911, you can clearly see some of the lightpainting passes in these behind the scenes shots taken by Dominykas. You can see that he also paid attention to the background area lighting up the wheels to the left of the image as well. It’s this sort of attention to detail that really elevates a single image into a story. 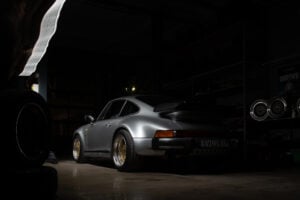 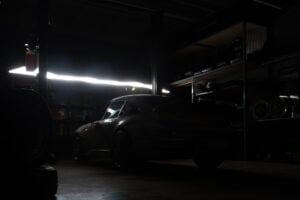 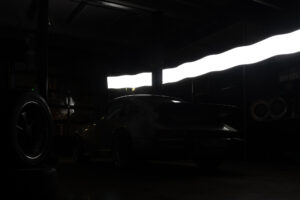 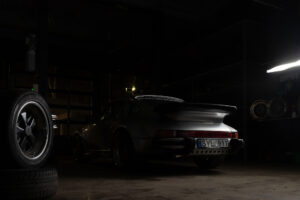 The final piece of the puzzle is the post processing. First of all on the background ambient image, the car is masked out (7:23 in the following video). Dominykas then adds both a cyan and magenta colour cast to the whole image to create that 80’s vibe, using a hue and saturation layer (9:05).

Now to add the lightpainted exposures (10:15). Basically you just unmask any of the parts from each image that you want to be visible in the stacked image.It’s not complicated, but it is time consuming and care must be taken to ensure that all the images are properly aligned, and that there isn’t any unwanted light bleed through or reflections where you don’t want it. The final trick was adding the headlights and tail lights including a slight hint of reflection on the ground from the rear lights.

Here is another angle of the same car photographed with the same technique: 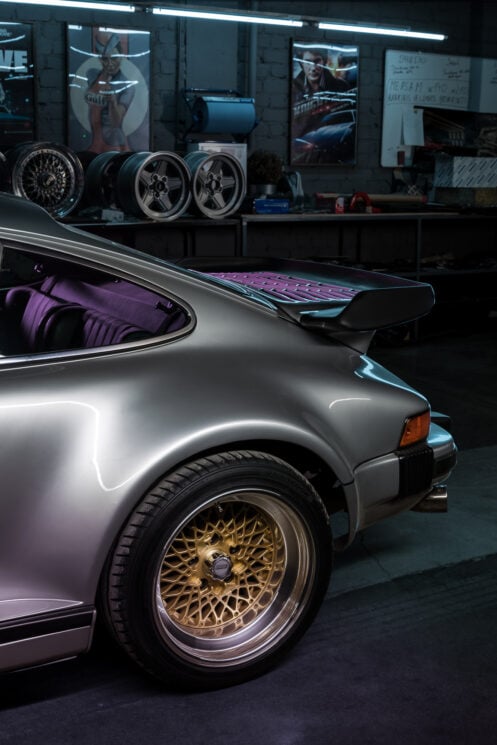 It is this incredible attention to detail that really brings the image to life, and makes it into something more than just a nice photo of a car. You can see the entire process from start to finish in the video below.