A little while back we shared a video about creating CFL light fixures for video lights. It involved driling and sawing. Flaviu Leordeanu sent me this cool oncept that uses almost zero toolsd to get a similar effect.

The following tutorial shows how to build a powerful “LightStrip” using CFLs. As seen in the picture below, the strip has 10 outlets in which I plugged 10 CFL bulbs.

This project started out a bit differntly. I initially thought of using 8 lights, on two 4-socketa power strips. I was going to affix the two power strips onto a wooden bar, painting it all black to make it look more “solid” and less obtrusive, and to use it as a “light-bar”, just like that.

Then, it just happened while shopping at Lowes that I saw a one-piece power strip, all metal, and realized that one long strip would work better than two individual power strips. It would be more solid, neater and can hold 10 light bulbs. The more, the merrier, right?I got it (and two extra bubls – 5500K-1400lumen CFLs this time, to see the difference, Although the final configuration will only use one type of bulb, depending on the project). Click the image to enlarge. 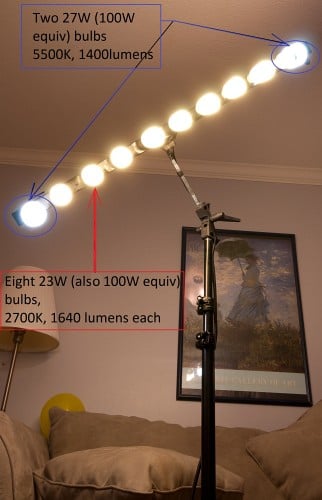 Here are the materials I used to build the LightStrip. Refer to the picture below. 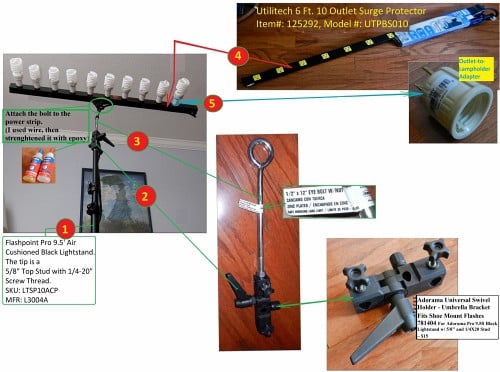 The assembly should be straightforward using the items listed above. The only (somewhat) difficult part was attaching the Eyebolt (3) to the metal power strip (4). To make sure it won’t ever break, I removed the back plate of the power strip and drilled tiny holes in the center where the eyebolt was to be attached, so I can “sew” the eye of the bolt onto it, with pieces of wire. So after the sewing was done, it was pretty stable, but I put some J-B Cold Weld over the “stitches” to make it stronger, and let it dry overnight. Once ready, I mounted the back plate back onto the power strip and poured some high-strength epoxy over that joint to make it even stronger.

Then spray-painted everything black to make it look neat, and voila, the job was done. Now as I was finishing this, I had this thought: what would illuminate my subject “better”: one really strong CFL, or several less-strong CFLs? So I decided to get a second setup, made of one single CFL, the strongest I could find online. 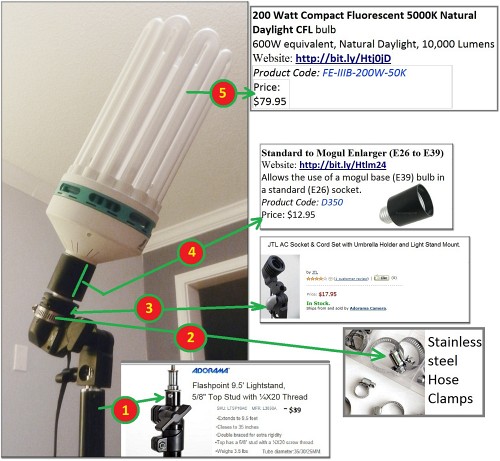 This is made of the following ingredients (also listed in the picture):

What’s nice about using only one CFL is that you can also use a softbox with it, like the 40″ UmbrelSoft II, or any umbrella. Anyway, I did a quick test afterwards using my cellphone’s light meter to see which setup produces more LUX. (I used my cellphone because I didn’t have a ‘real’ light meter; but this free android app is pretty nifty for measuring incident light). So I measured at 10 feet from the light source, to compensate for the fact that one is a 40-inch-long string of bulbs, and the other is just a single bulb. And as expected, the LightStrip illuminated the subject better. 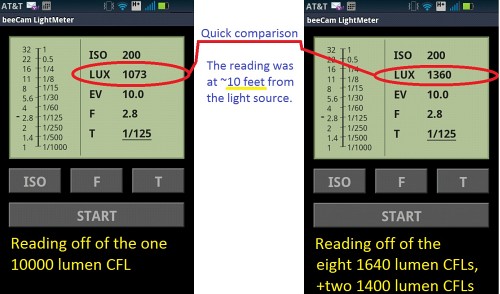 Now of course this wasn’t the best test, I just wanted to get a quick feel of what my phone’s sensor thinks of each setup. And both setups have advantages and drawbacks, and sometimes I may prefer to use one over the other, or use them together. I’m also sure that replacing the 10 small CFLs with 10 of the 2800 lumen CFLs, the LightStrip will be great for lighting up large settings. However, if you go that route, please consider that the 2800 lumen CFLs are quite heavy, so you’ll need to glue the Outlet-to-Lampholder Adapters to the power strip, to avoid them sliding out of the outlets.

Flaviu Leordeanu works as a Project Engineer at FedEx, and has a life-long passion for photography and photo gadgetry. You can see some of his photo work at his facebook site.