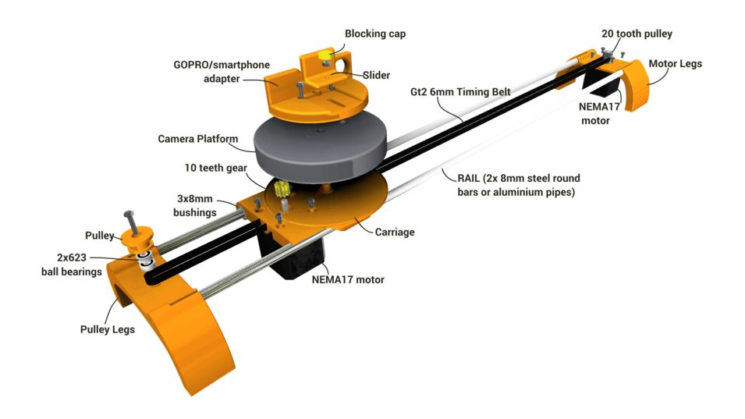 I’ve been getting into 3D printing quite a bit this year. Mostly with regard to how it can help me with my own photography and video challenges. One of the first things I did was to motorise my camera slider. Now, my own efforts in this realm are still quite basic, but while researching how others have overcome certain issues in this area, I came across this tutorial recently posted to Instructables by jjRobots.

It’s a tracking 2-axis motorised, mostly 3D printed camera slider. This means that it doesn’t just move the camera from one end of the slider to the other, but it also turns the camera. This way, your camera can move while remaining fixed on a specific target. And it’s all controlled from your smartphone – that app’s available for free, too.

The slider is based around jjRobots’ “Brain Shield“, which you can either buy or build your own – yes, it’s open source. It’s an interesting little board offering integrated Wi-Fi, 2 servo motor outputs, and 2 stepper motor outputs. For a project like this, that’s all you need, really. Of course, it can do more stuff, too.

So let’s have a look at the parts list…

There are also a few electronics components you’ll need to pick up, too.

The stepper motor drivers appear to be the standard A4988 drivers often used to drive 3D printers. I use these with my own DIY motorised slider, but they can be quite loud. If you’re swapping out the sound in post, this isn’t a big problem. But if you want to record sound while the slider is in use, you might want to check out the slightly more expensive silent StepStick TMC2130.

The whole thing is controlled by a free app, available on the Google Play store. It doesn’t appear to exist on the Apple App Store, so sorry iPhone users, looks like Android are first on this one. They say there’ll be an iOS version coming soon. There’s also an online user guide for the app available on the jjRobots website.

With the purchased components collected and the app installed, the next step is the 3D printed components, all of which are available to download on Thingiverse. They say that you will most likely be fine using PLA. Although I would suggest that if you’re using it in hot environments, then you may want to print ABS or PETG. 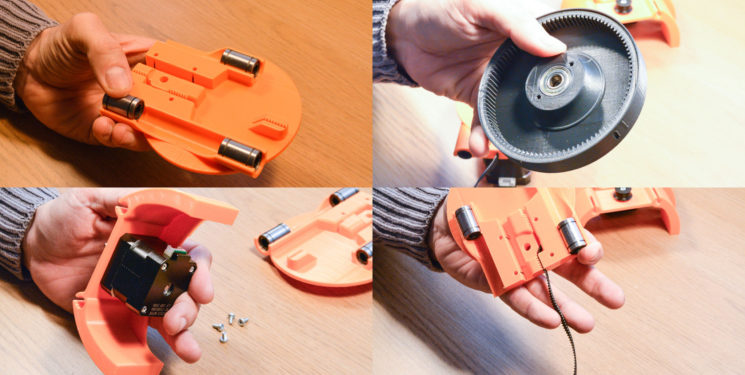 Depending on the camera you wish to use (a DSLR/mirrorless vs a GoPro or phone), there are a couple of different options for mounting. the standard plate screws right into your camera, but there is an optional camera/phone mount available, too. You’ll want to make sure your slider’s level when you use it, though, because there’s no tilt adjust. So, if your slider’s at an angle, it’ll pan at an angle.

After all the hardware’s bolted and wired together, it’s time to programme it. This is just like installing any other sketch on the Arduino. Download the code, compile it, and upload it to the Arduino. A number of times they specify the Arduino Leonardo. If you want to try using an Arduino Uno or a Mega, then I would imagine you’ll probably be ok, but don’t take my word for it. You use a board other than a Leonardo at your own risk.

Now it’s time to give it some power, and connect the app on your phone.

My own DIY motorised slider efforts have been based on the CNC Shield. It’s also a pretty cool board that can run grbl code, although I use the AccelStepper library to control mine through hard-coded instructions. But I end up wasting 2 or 3 of the Stepper sockets, and can’t add Wi-Fi to it. The Brain Shield looks like it could be a great alternative for me to try in the future. Especially as it comes with its own app for remote control.

I think if I were to attempt this, there are a couple of parts I’d redesign a little. For example, I’d need to figure out a way to modify the pan head so that I could tilt it and then rotate around the level surface on top. That way I can have the slider at an angle, but keep the camera level throughout the sequence – this is something I’m working on for my own slider right now, too.

But it looks like a great base for starting your own project.

Check out the complete instructions and find links to all the schematics and code on Instructables. And if you don’t want to go hunting for all the parts yourself, you can always buy the complete ready-to-assemble kit from jjRobots.