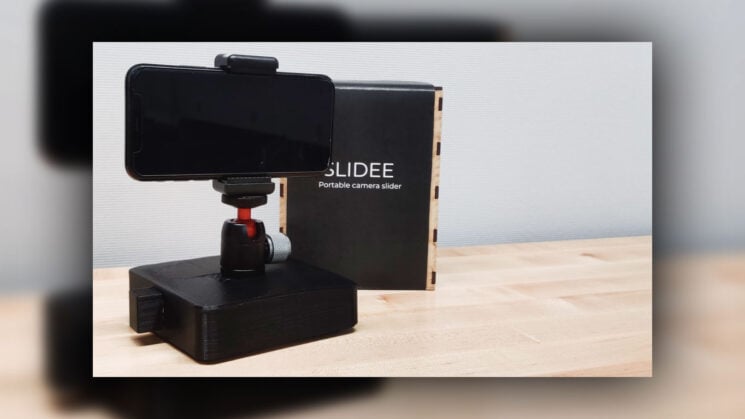 This is a pretty novel idea for a camera slider, called Slidee from maker Shivam Dehinwal. It has no motors, no Bluetooth, no electronics at all and no batteries. It’s built around a regular retractable tape measure. Well, ok, a not-quite-regular retractable tape measure. It’s built specifically around the Komelon Touch Lock measuring tape because it has built-in speed control – which is important when you want to control how quickly your camera moves.

It’s very cool, using a simple 3D printed housing with some bearing wheels and a simple mechanism to hold the retraction button at different positions to adjust the retraction speed. Essentially, the button acts like a variable speed control. The harder you push it, the quicker it retracts. You will, of course, need a 3D printer – or a friend willing to make the printed components – but this is about as simple as it gets.

As well as the tape measure, you’ll need some kind of ball head (personally, I’m a fan of the SmallRig BUT2665) or mounting system for your camera or smartphone, some ball bearing wheels (a pretty common 3D printer part available as a spare), an optional suction cup, some M3 threaded heat inserts, some M3 screws and either a 3D printer or access to one. You’ll also need a soldering iron (I like the TS100 with the BC2 tip for M3 threaded inserts) to put those threaded heat inserts into the plastic base.

Shivam says the current form of Slidee is the result of fifteen iterations and he could not be happier with how it works. He’s made all of the STL files available to download as well as complete instructions on how to assemble it all together on Instructables.

If you just want something cheap, easy and analogue that doesn’t require a fully charged battery – and you don’t need one that’s super slow for shooting timelapse – this looks well worth making up.