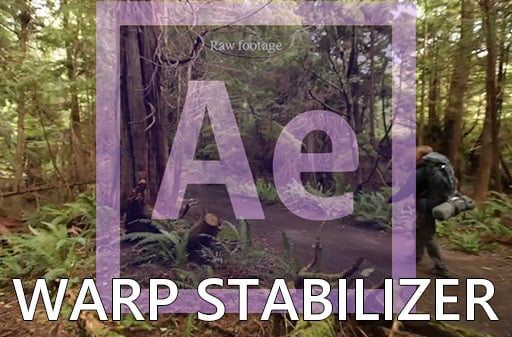 It’s uber-awkward being in high school.

In 9th grade, I was a music kid and played in everything from pit orchestra to pep band.

This mantra is basically a set of instructions to the “roll step”, which was paramount to marching band. It was our band director’s hope that we, as a bunch of awkward saxophone- and tuba-wielding 13 year-olds—in a costume that looked something like a bad rendition of the British uniform from the War of 1812 with a 3-foot tall faux-fur white hat (oh, I hope all pictures have been destroyed)—would glide past the audience come parade time.

This we did not do. More like we bobbled, uncomfortably.

But the “roll step” saying stuck with me, and to this day it works as a rule of thumb any time I’m walking with a camera, even with a MoVi. Yet, with it running constantly through my head, uneven terrain and any number of small obstacles can make good form and the right camera tool not quite enough.

For example, when trekking through the forest.

Be it MoVI, handheld, slider, or even monopod: sometimes you just need the helping hand of modern day post-production to make a rock-solid shot rock-solid steady.

Which is where Warp Stabilizer comes in.

Unless you have the state-of-the-art chicken-based stabilization solution. Then you’re golden.

The plugin, when used, succeeds at stabilizing most clips without any adjustment, rendering quickly and smoothly. Frankly, it’s an editor’s dream: drop it on to your clip, and it’s practically done.

But once in a while, this doesn’t work automatically. Some clips get a little, er…wonky.

Upon applying the Warp Stabilizer, previously stable clips undulate with a psychedelic trippiness which can only be compared to “that one time at band camp”.

Why does this happen?

Part of the slipperiness of the image is actually the success of the algorithm in smoothing the footage.

Premiere is trying to track and move the pixels of the image to make it “stable”. The Subspace setting, which is on by default, is attempting to move the image’s pixels in a pseudo-3D space. Thus, the clip sometimes has a “breathing” effect, as if parts of the image are zooming in and out while others remain constant.

By changing the settings manually, you can mitigate this weird effect.

In order to do that, we need to understand what is really going on with our footage with the Warp Stabilizer applied.

To understand how and why this “trippiness” occurs, we’ll first break down the different methods warp stabilizer uses.

As above, if a method doesn’t have enough area to track, it resorts to the previous method. This can be very helpful, but in the same way, when changed manually, can sometimes stabilize an otherwise unfixable clip.

This first example demonstrates how each method of Warp Stabilizer works through the footage, as well as the difference between smoothness and no motion options (which we’ll get to in a second). Notice how the image is scaled by the end, sacrificing resolution for steadiness.

Here are the settings used in the final rock-steady shot above.

Basic stabilization of a clip

When we adjust from Subspace to Position-Scale-Rotation, the corners are no longer distorted and the image is successfully stabilized.

Too high of a “smoothness” value and Warp Stabilizer (from here on out, let’s just shorten this to “WS”) can start to overcompensate for the motion of the clip, causing some of the same distortion effect as in the Subspace warp method.

Think high school students who concentrate on the roll step so intensely they play completely out of tune.

No motion will try and make the shot completely still. This option fits well if you’ve shot on a monopod or tripod with little to no camera movement.

Smooth motion is better for a shot in need of stabilization but has the desired camera movement already within it. WS will attempt to include some of the original motion, just smooth it out.

Still motion is a super-secret mode in WS that can be accessed via a super-secret code in Premiere upon start up. You remember: up, down, left, right, A, B, start?

I like to think there is a lot of cross-over between Nintendo and the roll step.

Anyway, following is one example of adjusting the settings in WS to fix basic shakes. Like I said above, a “basic shake” is one that hasn’t been totally allayed by sure footing and sensible equipment choice. After all, the roll step can only do so much.

In this example WS is used to smooth out aerial footage to accentuate the feel and mood of the clip.

Here are the final settings used in the video above to give the Emerald Isle the overview it deserves.

Following so far? Because it’s time to break out the big guns.

Microshake or micro jitter is that weird shake that looks like the whole image is subtly but noticeably vibrating. If you grabbed a 7D, put a 200mm on it without image stabilization (IS), and shot handheld while standing on a running washing machine strapped to the back of an elephant rollerskating down a mountain, you would almost certainly have some microshake in your clips. Vibration reduction / image stabilization lenses can help greatly with this.

Again—have a chicken? You’re in the clear. But if not, WS can help.

Here are the initial settings we can use to begin removing microshake.

The rolling shutter, which becomes active once you use either Perspective or Subspace within “Detailed Analysis”, can help reduce some microshake.Playing with settings and watching the result is key. Yet, some microshake, depending on the severity, can be difficult to remove completely in post.

You can employ the detailed analysis under advanced tab in WS.

In the example below, the car mounted footage is laden with microshake.  Using some advanced settings in Warp Stabilizer we can minimize this, while still embracing the emotion of the shot.

After significant trial and error, these settings for the final shot in the video above provide the next best thing to actually being in the car.

Warp Stabilizer is a tool not a crutch.

I can sympathize with that nagging feeling: shooting footage that I knew would need some touching up in post, despite my best efforts in the field.

There’s no replacement for a beating heart behind the camera—experimenting, adventuring, and inevitably wobbling. To me, this is the true worth of Warp Stabilizer: it can make shooting fun again.

What Warp Stabilizer can provide is some reassurance, that back at home is one more tool to help you tell your stories the way they’re meant to be told.

Sometimes a big rig is what you want for a dedicated day of smooth shooting. But for reaching the top of a lookout point, if I do have a camera in my hands, I want to preserve the mood of the moment: majestic, anticipatory, vast.

In these moments I can let the story find me.

All these years later, the green of the football field, where I roll stepped with woodwind in hand, has grown in scope. Now my saxophone is a camera, and whether I’m backpacking or just spending a few hours getting out into nature, capturing parts of my own story, I try to glide as gracefully as possible.

In other words, I don’t treat Warp Stabilizer as a crutch, and neither should you.

A basic understanding of how it works is enough to encourage you to immediately head out without hesitation.

Or maybe you should just go ahead and adopt that chicken. I might. After all, it’s the popular thing to do here in Portland.

I tried to cover a lot of ground, I know, but if you have any questions at all, please ask them in the comments below.

Jeremy Bircher of Story & Heart conducts a digital orchestra of footage—an opera of data. He arranges subtle nuances of color and audio and leads massive crescendoes of data acquisition. Story & Heart is a video licensing platform and filmmaking community built by storytellers for storytellers. You can visit they growing site here, and follow their social media account here: Twitter, Facebook & Vimeo. This story as originally posted here.

Why you should stop worrying about damaging your gear

If you love swirly bokeh, you’ll love the new Voigtlander Nokton 50mm f/1.5
« Watch This Helicopter Struggles With Winds For Photos Of French Beaches Smashed By Waves
The Aputure VS-3 Field Monitor Packs More Than Its 7 Inches »