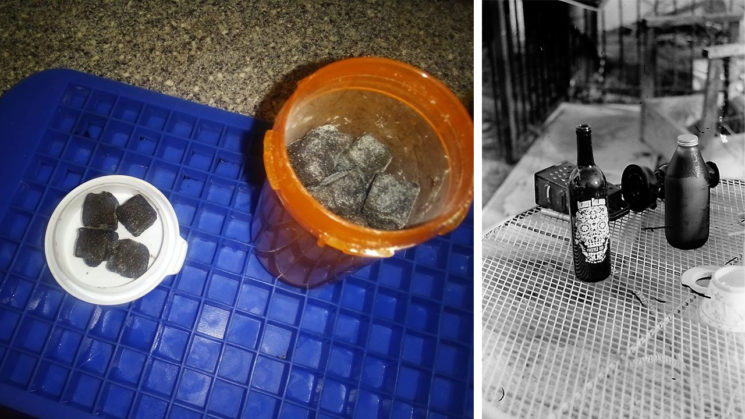 In the last couple of months, the whole world it seems was on hold due to the rampages of COVID-19/ Corona Virus. In the Facebook groups I’m in many users were seeing shortages in supply. Some online stores stopped shipping Rodinal (caustic liquid) and other stuff was just not to be found.

Adding to this was the fact that a lot of users were not consuming chemistry as quickly and were looking at spoilage/oxidation of partially consumed jugs of developer turning brown on the shelf.

I myself like the pyro developers made by Jay DeFehr,  510 Pyro and Obsidian Aqua. The 510 Pyro is a thick liquid. One part just add to water & go but uses very toxic pyrogallic acid. Obsidian Aqua uses less toxic pyrocatechol but needs to be made with a part A and part B mix . Both formulas are top drawer and have good shelf life.

One of my chem suppliers is a site that primarily sells to home soap & cosmetic makers. They had a tip on their site that if you are making SOFT soap use Potassium Hydroxide with TEA (triethanolamine) and if you want HARD soap use Sodium Hydroxide with the TEA.  I was going to use TEA as the suspension carrier (like 510 Pyro) and sodium hydroxide as the accelerant in the mix (it’s a common component in a lot of developer mixes like Rodinal). I just had to combine the ingredients in the right proportions to make a Frankenstein cross between developer & bar soap.   And that creation I call PyroButter.

In a Pyrex type bakeware measuring cup : 150ml Triethanolamine (TEA) heated to near boiling—cautionary—potential scalding hazard if your glassware breaks. Microwave on high for 2 minutes

Mix all of the above into the superheated TEA while stirring with a stout spoon. I would recommend under a vented range hood with fan or out on a patio—away from your face. Fumes are not conducive to respiratory health. Goggles/gloves or full face guard advised. If you want the “soft soap” easier to spoon version add 50g POTASSIUM Hydroxide and add it sloooowly to the hot liquid—sprinkle sprinkle small amounts while stirring. If it’s not dissolving all the way pop it back in the microwave for another minute—stir to completely dissolve. If you want the harder bar soap version use 50g of SODIUM hydroxide with the same cautionary of sloooow sprinkles while stirring.

Allow to cool just a bit and pour into a clean dry mason jar (used for canning fruits & such) and allow to cool and you’ll have what looks like a jar of earwax. 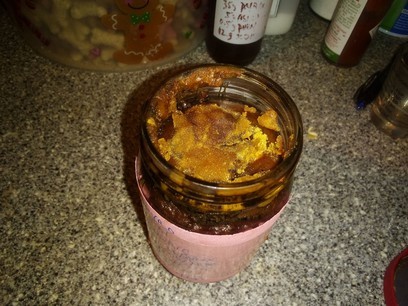 Simply stick in a paring knife or spoon tip and weigh out a gram…oh wait, that’s a bit inconvenient isn’t it? What if you are sending some to a friend and they dont have a scale? Do you see it as a hassle to break out a scale EVERY time you want to do a roll? Going back to my earlier though of a simple ‘Pill” all uniform ready to drop in…

I found some nifty SILICONE mini-cube ice cube trays on Amazon. 160 little cubes. The silicone makes them heat resistant and easily flexed to pop out the contents. Lay down some paper towels or newsprint and pour the hot mix in and then level it with a butter knife as we see in this next photo: 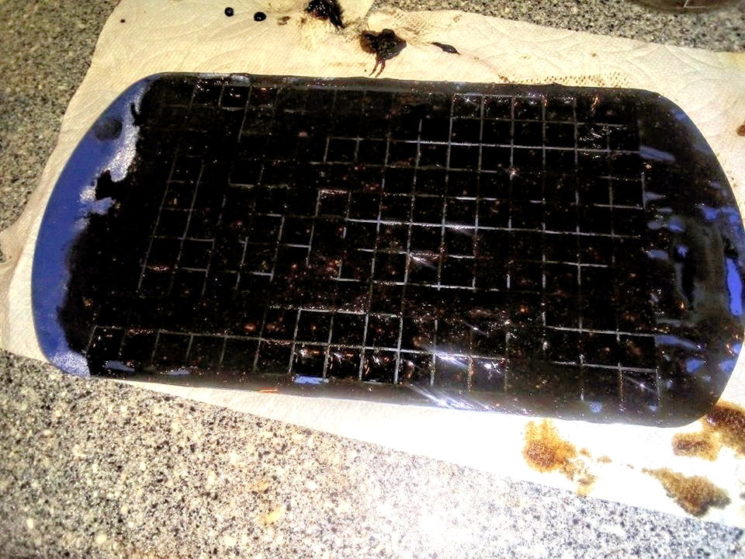 I set this in the freezer for a couple of hours to totally get cold and flex the tray a row at a time & pop out the cubes. The cubes are a little tacky like fudge so I put a little sodium sulfite in a plastic bowl and roll the cubes for a no-stick dusting and we end up with these: 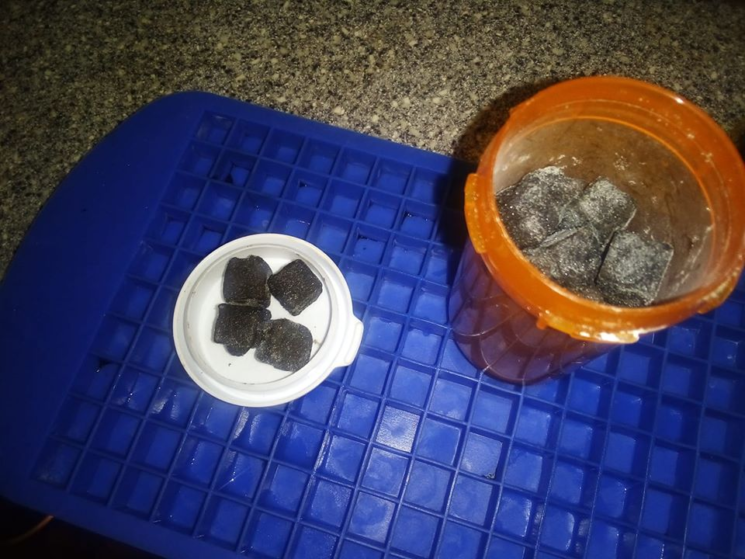 Nice uniform cubes that weigh in at 1.5g each. Will it work? Lets see what a sample looks like from T-max expired in 2005. This is the owner of my favorite thrift store in Tucson. 1 cube 1 hour semi stand  (10 sec agitations every 10 mins) 300ml single reel tank. Stir cube to dissolve and awyou go with fresh developer every roll. 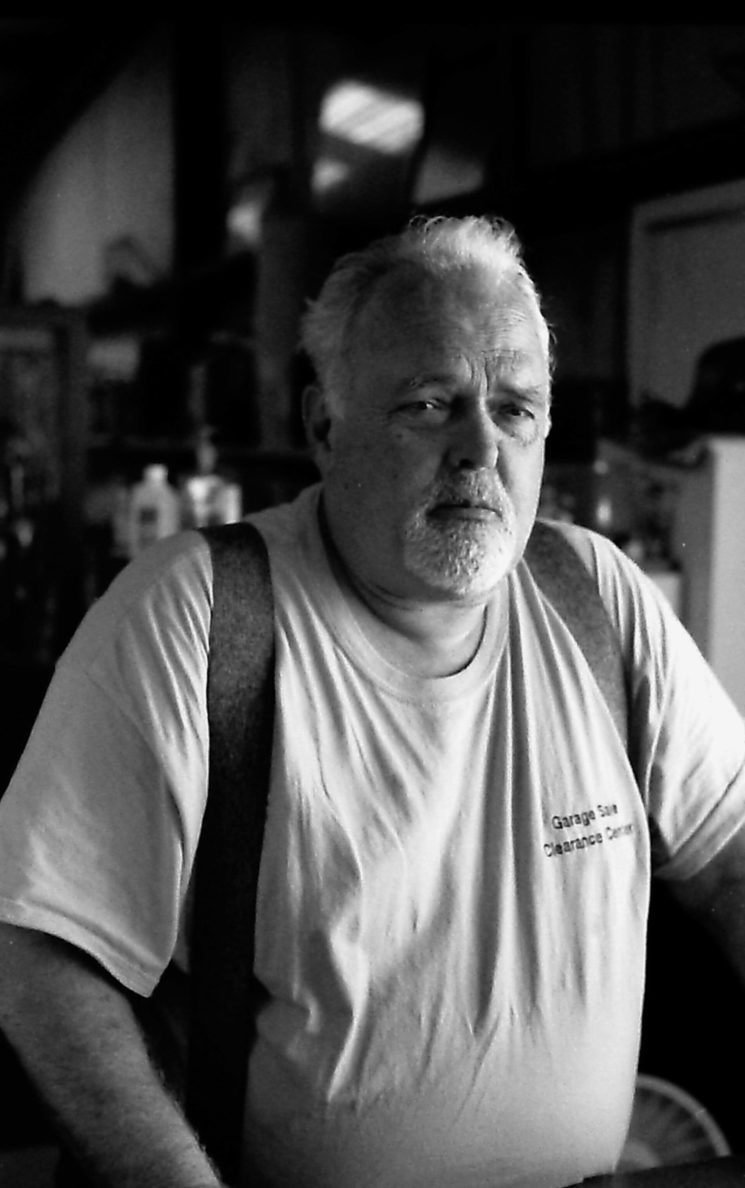 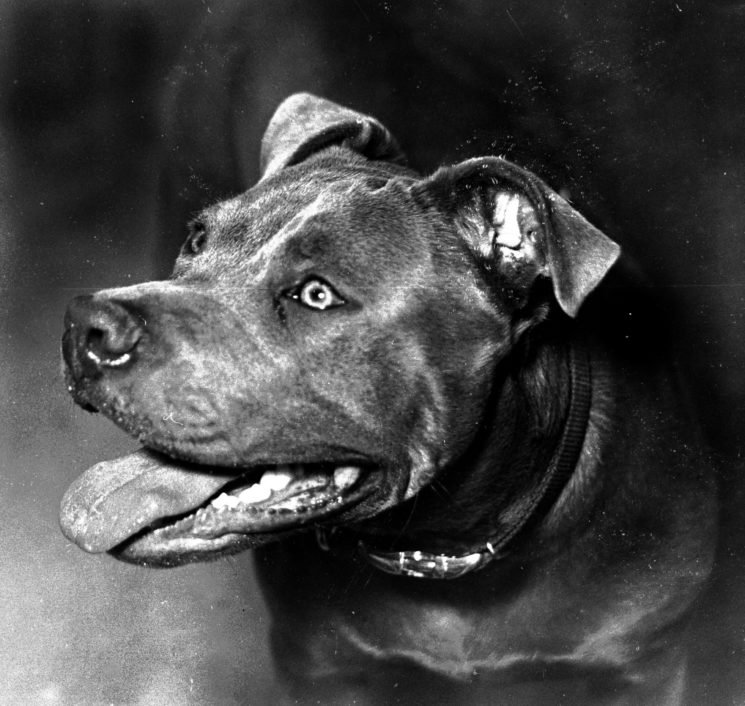 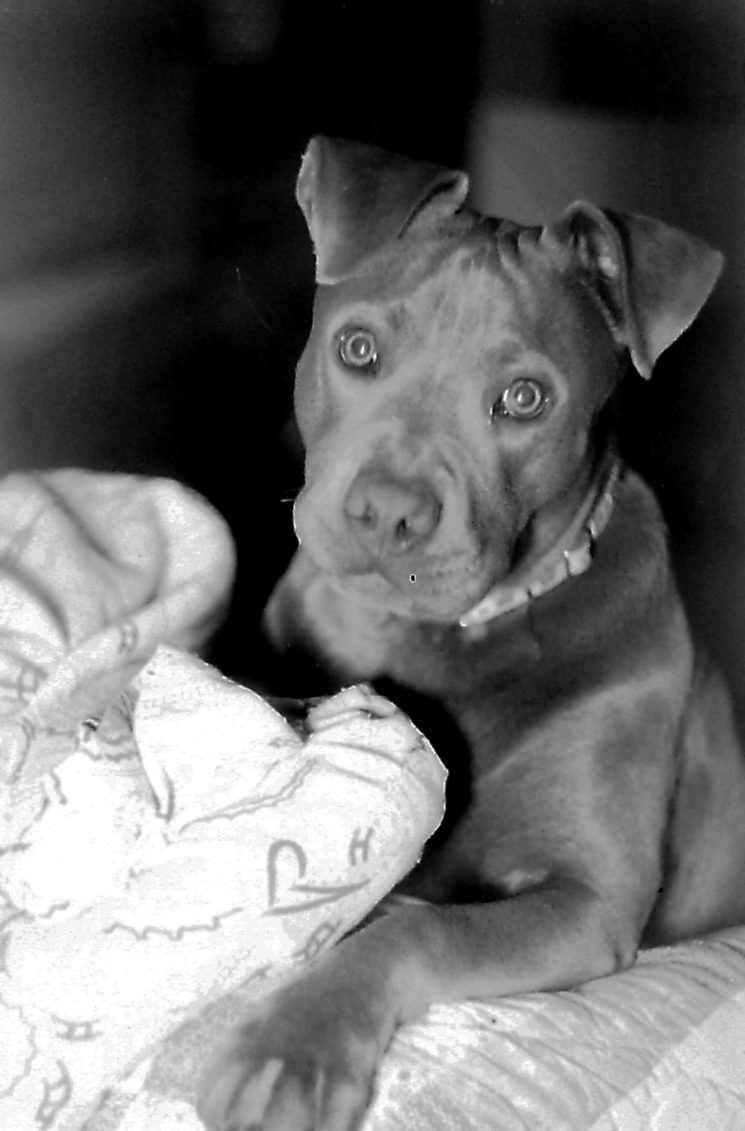 What about fresh film? Here is some Ultrafine 400. Same 1 cube 1 hour 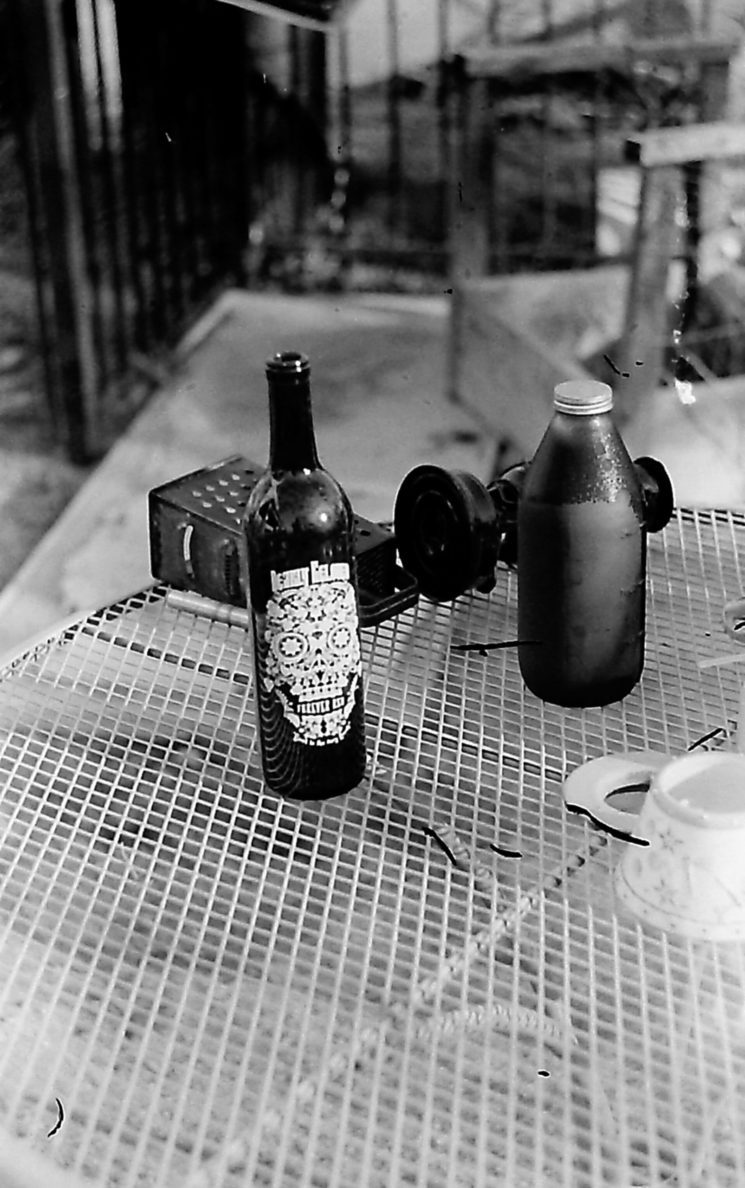 What if I don’t like Pyro based developers. Shame you can’t do that with regular stuff—

microwave for 2 minutes. Cautionary—wear gloves and be wary that you do not

crack your vessel as this stuff is a sticky scalding hazard

Add the following while stirring:

If the ingredients dont dissolve readily, reheat in the microwave for 1 more minute. Stir.

This makes 2 trays of cubes (320 rolls). I find this mix to not be quite as solid as the pyrobutter and best kept refigerated. 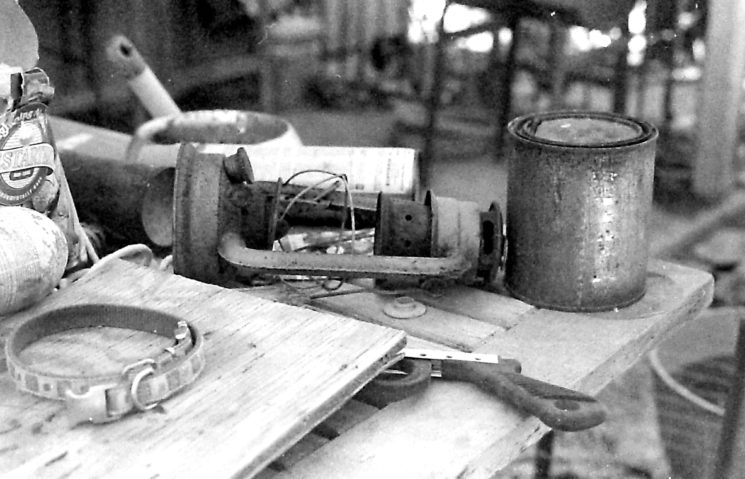 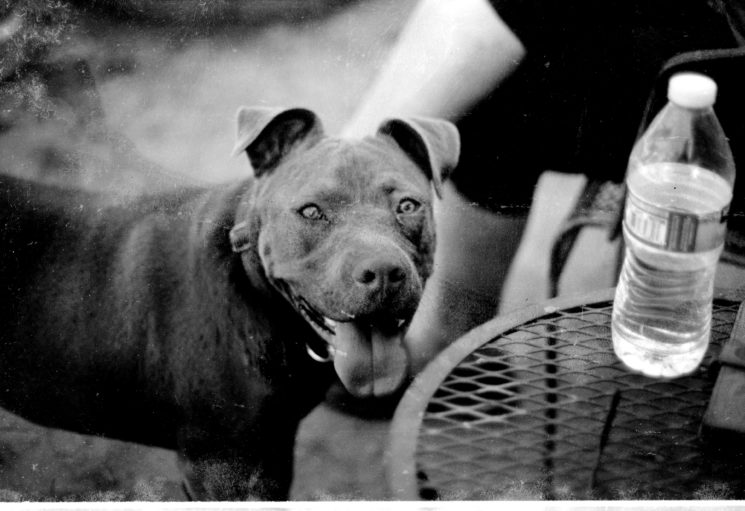 The thrust of these mixes is to provide a consistent concentrated 1 part solid developer mix. Enough developer to process 320 rolls fits in a small jar. The shelf life should be

decades, most likely that of Rodinal or longer. It’s not a liquid so it’s easily shipped to a friend. 1 Cube or 1.5g processes a roll of film. Just add to 300ml water and stir to dissolve. 1 hour semi-stand for most films, although one should always verify to your tastes & outcomes. Photography is subjective. Cost analysis puts this at about 3 cents a roll for what I pay for supplies in the US.

There’s no throwing away partial gallons of unused juice, and it’s easy to store.

Finally, as for the firmness: the first formula, the PyroButter, stays very solid at room temperature. The MHP Butter is more “gooey” and soft in comparison. A user might just forego making the cubes and opt to cut and weigh as they go with MHP formula or keep those cubes chilled.

Make Your Own Fake Ice Cubes For Photography Staging