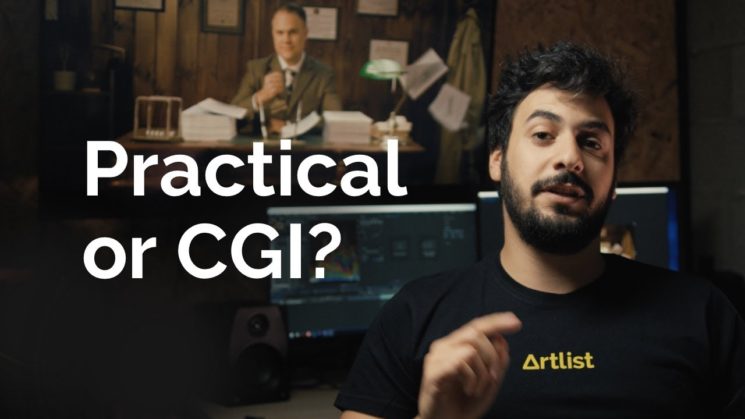 If you’re shooting videos, you can find both practical effects and CGI useful. But combining them can give you limitless creative possibilities. In this video, Liran Friedman of Artlist will show you how you can bring practical visual effects and CGI together and shoot an original and fun video.

Liran uses an example of a recent Artlist’s ad, where the team brought practical and computer-generated effects together. There are two scenes in the ad. One shows a filmmaker searching for music, and the other shows a lawyer who represents Artlist’s simple license:

In the BTS video, you can see how they did it. The team used a dolly with rails for both scenes and shot them with a RED Raven paired with a vintage 35mm lens.

For the filmmaker shot, the actor was placed in front of the green screen. As he pretended to be flying through the album covers, the team was shaking his desk and chair and used flags in front of the lighting. The background with album covers was made in Cinema 4D and rendered in Octane.

To bring everything together, the team keyed out the actor, added some more shadows, reflections in his glasses, as well as some dust particles to increase the effect of speed and movement.

For the lawyer shot, another actor was placed in front of a wall, hitting papers with a stamp. All the papers you see flying around him are actually practicals – the only animated papers are those flying through the stamp. The team masked out the foreground elements, lit the lawyer’s hands and added shadow to the papers.

Here’s how the Artlist team did it:

These are only some ideas on how to combine practicals with CGI. If I may add, you can also DIY a green screen if you’re on a tight budget. Don’t be afraid to get creative and make the most out of possibilities ahead of you.

How to make 3 great practical effects for your videos