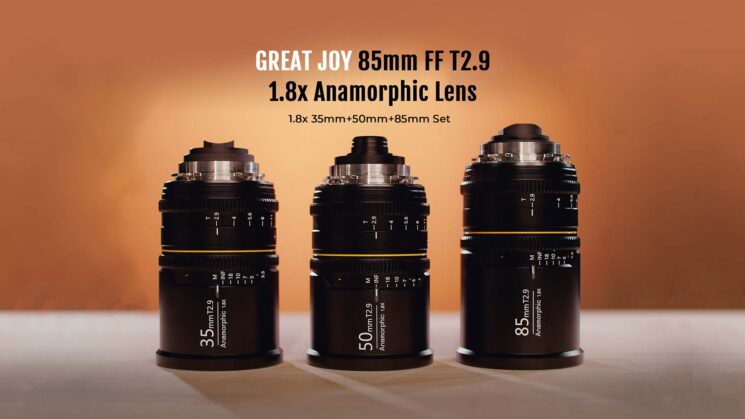 Great Joy has announced its newest full-frame anamorphic lens. The Great Joy 85mm full-frame T2.9 1.8x Anamorphic lens adds to the 50mm T2.9 and 35mm T2.9 launched earlier in the year to round out the set quite nicely. As with the first two lenses in the range, the new 85mm T2.9 is also being launched through Indiegogo with a super early bird price of $1,229 or $1,495, depending on the mount you want.

It’s available in 6 different mounting options with Canon EF/PL being the more expensive option and Sony E, Canon RF, Micro Four Thirds and Leica L being the slightly cheaper option. Naturally, it comes in a cinema housing with 0.8 MOD pitch gears and matches the 85mm front outer diameter of the other two lenses with a similar length – which varies depending on the mount.

As is typical with anamorphic lenses, the Great Joy 85mm T2.9 full-frame 1.8x anamorphic presents the usual blue horizontal flare with oval bokeh. The lens is also available in amber and no-flare options, too, depending on personal preference. Looking at some of the samples videos, it has well-controlled lens breathing with minimal changes throughout the focus range.

The lens sports a 16-bladed aperture with a maximum aperture of T2.9, a focus throw of 238° and an iris ring rotation of 84.3°. The wide aperture on such a long focal length lens with a 16.2° vertical and 44.8° horizontal field of view provides pleasing oval bokeh that looks typically cinematic. Its image circle covers a full-frame sensor nicely and is actually large enough to cover Vista Vision cameras with sensors as large as 40.96 x 21.6mm. Its constant 1.8x squeeze ratio ensures no distortion in proportion as you move through the focus range and contains 18 elements in 15 groups. 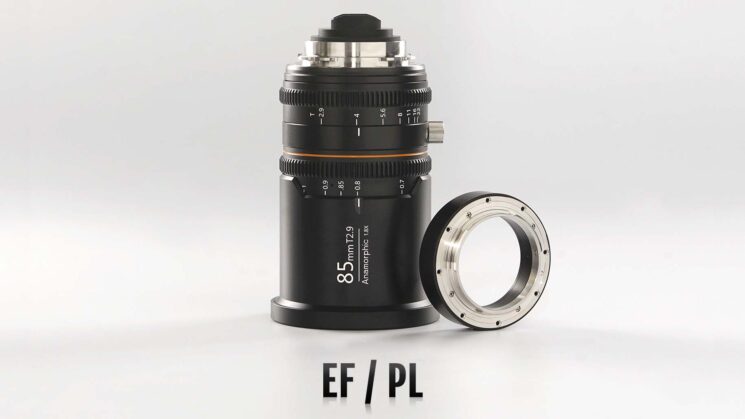 It’s available in six different mount options, including PL and Canon EF – although, technically, this is one lens that supports both – but this lens protrudes out of the back. So, if you were thinking of getting the EF mount version and using it with an adapter that takes drop-in filters with RF mount bodies, then you’re out of luck. If you’re an RF shooter, you’re better off just getting the RF mount version. As well as PL/EF and RF, it’s also available for Sony E, Leica L and Micro Four Thirds. The RF, E, L and MFT versions are also $300 cheaper than the PL and EF versions at MSRP once the campaign is over (right now they’re $266 cheaper). 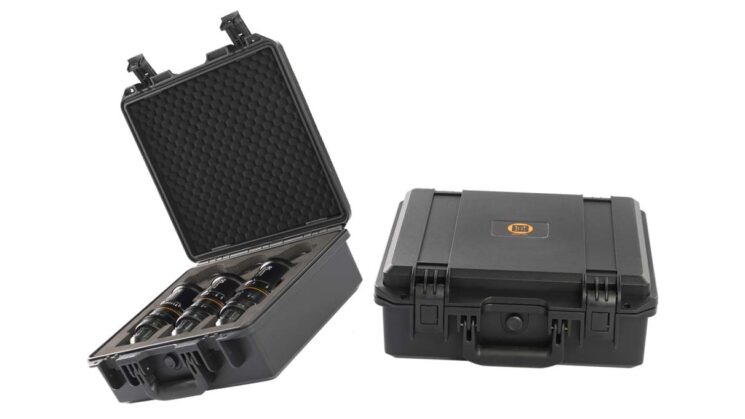 The new lens completes Great Joy’s T2.9 1.8x anamorphic full-frame lineup, though, and the company is now offering a Pelican-style case that can house all three. This isn’t included with the trio bundle, strangely, and costs an extra $199 if you want one – although it’s $139 during the campaign if you want to add it when you pledge.

To find out more about the Great Joy 85mm T2.8 1.8x Anamorphic lens, head on over to Indiegogo, where you can back the project if you think it suits your needs.