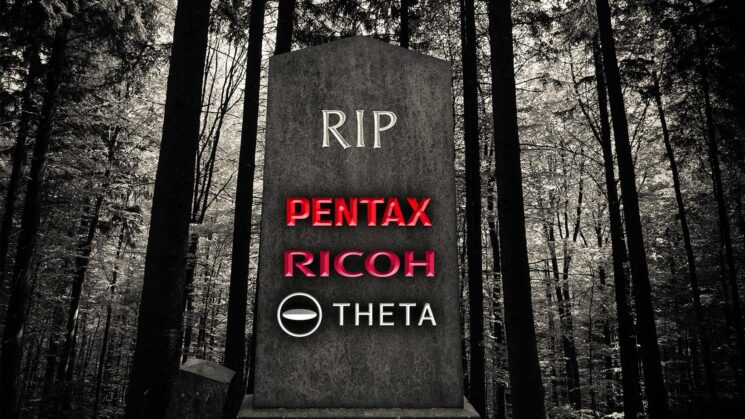 In a recent article on Japanese outlet Newswitch, Ricoh CFO Shun Kawaguchi says that the company is looking to essentially dump some of its business in order to be able to focus its time and money on more lucrative areas of the company. There was no explicit mention of Pentax, Ricoh’s own branded cameras or the Theta series of 360° cameras, although logically, they might be some of the first up for the chopping block – and probably in that order.

Pentax’s defiance of market trends and its steadfast refusal to enter the mirrorless market could be its downfall. Who could’ve seen that one coming, huh? Pentax proclaimed in 2019 that users would start switching from mirrorless back to DSLRs within 1-2 years. Well, it’s 2022, and that hasn’t happened. In 2020, they reaffirmed their commitment to DSLRs. And just last month, they released the entirely underwhelming Pentax KF – which is basically just a K-70 with a flippy-out LCD.

Ricoh, which is shifting from a multifunction machine to a digital service company against the background of the rapid progress of paperless, will introduce an in-house company system in April 2021 and emphasize return on invested capital ( ROIC ). In addition to profitability and investment efficiency based on ROIC, we will evaluate the business portfolio from three perspectives: market position and suitability for digital services. Shun Kawaguchi, a corporate executive officer and chief financial officer (CFO), said, “The time has come for us to choose which businesses to choose.”

The article states that Ricoh currently owns around 30 different businesses, and some of them are moving towards being either sold off or shuttered completely based on return on invested capital (ROIC). Basically, are they making as much as Ricoh’s been putting into them and are they making enough over that ROIC to justify the effort going into keeping them running?

Pentax may not be dead, but they’re certainly not thriving in the same way that Sony, Canon and Nikon are. They’re not even doing as well as Fuji and Panasonic. I’ve no idea where OM Digital Solutions – the new owners of Olympus – sit, but I’ll bet it’s probably not quite as bad as Pentax. After all, it still has some of that Olympus legacy behind it, with a loyal user base and compatibility with Panasonic and other 3rd party lenses. What does Pentax have in the way of 3rd party support? Well, there’s a Godox flash trigger, but that’s about it.

If Pentax is sticking with its “DSLRs or Die!” attitude, then it looks like it’s going to be the latter.

When it comes to Ricoh’s own branded cameras, there aren’t really many. There’s the GR series – which is currently the GR III and GR IIIx – and the WG series of low-end waterproof compact cameras, like the WG-6 and WG-80. While both of these cameras do have some limited unique selling points, they’re probably not going to be enough to justify keeping them around, especially when there seems to be so little advancement between new iterations.

And as far as Theta… Well, they were one of the first in the industry to release pocket-sized 360° cameras with the original Ricoh Theta, and the Theta Z1 is still one of the best on the market. But with the Insta360 ONE RS 1″ Leica 360 Edition costing $200 less than the Z1 and offering arguably more versatility, not to mention Insta360 completely cornering the lower end of the 360° market, Ricoh might just decide that the Theta brand isn’t worth pursuing, either.

It would be a shame to lose any of them. Pentax, the GR series and Ricoh Theta product lines have all, at some time or another, been held in pretty high esteem amongst certain audiences. But it’s entirely possible that all three might be on their way out!

Ricoh announces major restructuring – is Pentax about to be reborn or are they just dying?

« Great Joy rounds out its full-frame 1.8x Anamorphic lens lineup with the 85mm T2.9
Capture One is changing its perpetual license and ditches annual release cycle but it’s not as bad as it sounds »