Just one month after announcing the entry-level HERO+ LCD, the undisputed king of action cameras has just announced another new model. This one sports an entirely new, and drastically smaller, design.

The Session looks like a lens block that was cut out of a regular GoPro making it 50% smaller.

Including its integrated waterproof housing the camera weighs just 74 grams, which is approximately half the weight of its bigger brothers in their own underwater housings.

Of course the huge cut in size and weight come at a cost; both feature and money wise.

Being so small the HERO4 Session obviously doesn’t have any spare space to waste and the display panel was the first to go. Next were the buttons, leaving just one to control the camera, and forget about the LCD that was added to the model announced last month.

Unfortunately the 4K sensor is gone as well, leaving the Session with a top video resolution of 2.5k (1440p)/30fps. Of course the camera also has standard 1080p/60fps, but a rather disappointing 720p/100fps means you won’t be getting the best slow motion footage with the Session.

On the other hand, the crazy small camera can go places where its now chunky-looking older siblings couldn’t and the fact that multiple Sessions can be placed side-by-side with minimal spacing between lenses is a big plus for multi-camera arrays. 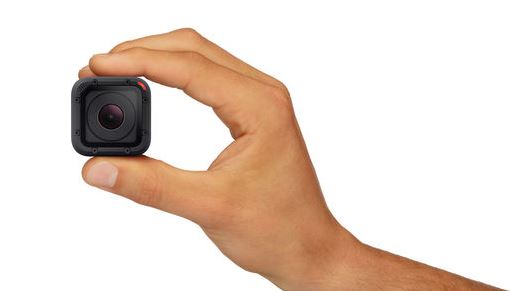 The standard GoPro mount wouldn’t allow users to fully benefit from the compactness of the Session, and the company was smart enough to come out with two new mounts for it: the low-profile frame and the ball joint buckle. Don’t worry, though; it will still be compatible with your regular GoPro mounts. 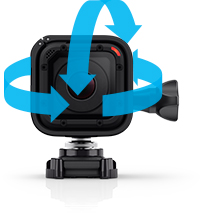 As mentioned, the Session is controlled by just one button. This is just another one of the features that make the camera hassle-free. No more messing around with buttons and menus, no more having to quickly attach the underwater housing before jumping into the sea (where it will be waterproof to 10 meters/33’).

And while we at it, the new design includes two microphones which drain quick enough that recording audio should be a breeze even when moving in and out of the water.

The two mics should also help reduce wind noise as one mic is located in the front and one in the back and the Sessions automatically switches between them for optimal results.

Remember I said the camera is fuss-free? Auto image rotation means you no longer need to wade through menus to get your footage the right side up when mounted upside down. A Built in battery also means you can’t lose your battery or forget to take it with you, but might seriously limit you if you’re used to swapping out batteries on the go.

The camera also features WiFi and Bluetooth connectivity, as you’d expect from any action camera these days, and can be controlled via the GoPro app or using the Smart Remote. 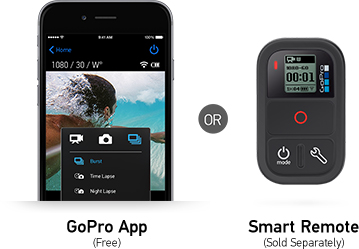 Another downside of the Session is the fact that it is only capable of capturing 8MP photos, and when you consider the others (no 4K, no high speed video, limited underwater rating, no LCD, etc), it is easy to see that this is more of a niche camera – with users who need tiny size or easy operation in mind.

If that doesn’t convince you, just have a look at the price tag; it’s costs $400, which is the same as the more capable HERO4 Silver.

The HERO4 Session probably wouldn’t be my first choice, but for close quarters or for hassle-free operation this seems like a winner.