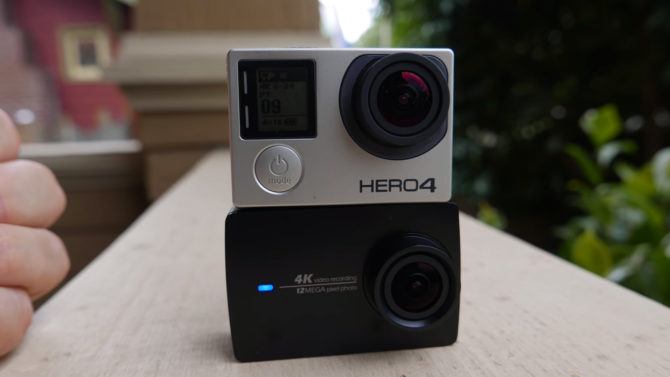 Yesterday, we mentioned that the Yi 4K action camera was now available in the USA and it seems that the pre-orders have already started arriving into the hands of waiting users.

One such early recipient is filmmaker Deejay Scharton, founder of DSLR Film Noob, who has put together a quick first impressions video, side-by-side with the GoPro Hero4 Black.

An interesting first look, and I wasn’t actually aware that you could use an external microphone with the GoPro via USB until I saw this video. I hadn’t considered this with the Yi 4K, but now that I know it doesn’t have this feature, I kinda want it.

It’s not a deal breaker for me, though. I can always record sound to my iPhone or Tascam DR-100 if need be and sync up in post, and when the camera’s inside a housing that fully conceals the internal mic, that’s what I’d do anyway.

I find the first one a little interesting, because the Yi’s specs (they’re right down at the bottom of the page) claim that it has the same 155° field of view as the GoPro Hero4 Black.

I also find the last one quite nice, personally, because I’ll be editing the footage in Premiere Pro and grading with DaVinci Resolve where lower contrast is generally desirable. It was one of the first things I noticed in videos when played side-by-side.

If you’re not going to get too heavily into editing and grading your footage, and simply want to set start and end points before uploading straight to YouTube, then I can see why the higher default contrast of the GoPro can be more useful.

Deejay’s on the fence, he says, regarding the image quality, and that “the hero 4 is getting a run for the money with the Yi 4k action camera, but there are a few trade offs.”

I’m still looking forward to getting my hands on one.

Did you pre-order a Yi 4K? Has yours arrived yet? What do you think? Let us know what you think of it in the comments.

« FStop, it’s basically Tinder for photographers and models
How I Shot These Etherial Portraits With A Lensbaby »