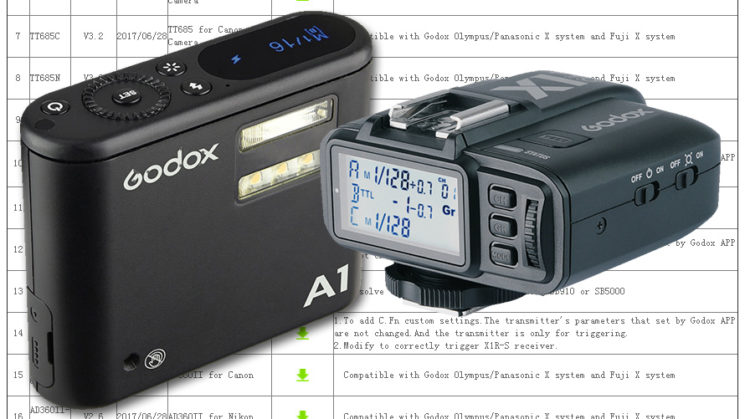 Well, this is a pretty cool and interesting development from the Godox camp. There’s a new firmware out for each of the five Godox X1T triggers. Five, because there’s one each for Nikon, Canon, Sony, Fuji and Olympus/Panasonic. Releasing a new firmware in and of itself isn’t a big deal, but what is interesting is what this particular release seems to add.

Recently we told you about the new Godox A1 flash trigger for mobile devices. It talks to your phone via BlueTooth and fires your flashes when you shoot a photo with it. Great for quick behind the scenes shots for social media. Now, though, it appears that you might be able to use the mobile app to control the flashes for your DSLR or mirrorless camera, too!

This is what the note actually says…

To add C.Fn custom settings. The transmitter’s parameters that set by Godox APP are not changed. And the transmitter is only for triggering

We may be mistaken (but we don’t think we are), but this seems to suggest that the X1T basically goes into a “dumb” trigger mode. It essentially only tells your flashes to fire. The firmware disables the ability of the X1T to change any settings on your flash units. It also says that the Godox App (GodoxPhoto) sets the parameters. At the moment, this app only works with the Godox A1.

The logical assumption then, is that your phone communicates with the A1, which in turn sets the power on each flash. Then the X1T on top of your camera’s hotshoe fires them at whatever settings the A1 told it to.

The only person I know who happens to have an A1 is out of town until Wednesday. So, we’re presently unable to confirm if this is the way things will work. But, I don’t see what other option it could be.

I suggested in the A1 pre-order announcement that it would be fantastic to see Bluetooth integrated into an X1T successor. Then we could get this kind of functionality. But I never suspected we’d see a firmware that could let us do it with the current generation.

The firmware update is available for the following transmitters…

As well as this, it looks like the Fuji transmitter has been updated to add support for the Fuji GFX 50s. Support has also been added for the X100F and X100T cameras to reach 1/1250th of a second in high speed sync mode.

You can download the new firmware on the Godox website. And you can get the GodoxPhoto app on the Apple App Store. Android version is expected next month.

If it works the way it seems, the Godox A1 just got a whole lot more useful. Especially for studio shoots. The ability to store lighting presets for commonly used setups will be a great time saver.

Update: Godox have updated the X1T manual to reflect the changes.