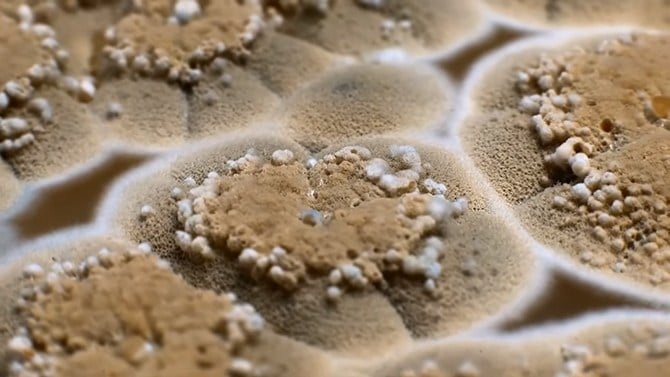 We’ve seen some pretty interesting and amusing cinematic recreations in the past, but this is really cool, if a little bit legally dubious.  Somebody has recreated the Game of Thrones intro sequence using timelapse footage shot by Nick Lariontsev of mould and fungi growing right before our eyes.

Obviously, it’s not a shot-for-shot recreation, as was the case with this recent recreation of the World of Warcraft movie trailer made from in-game assets, but you can almost imagine little people living out their tiny lives and waging miniature war over these microscopic landscapes.

Obviously HBO own the rights to the music and the opening title and Nick owns the timelapse footage.  While Remix culture is often used as an excuse to simply steal, sometimes the results can be amazing.  Of course, Nick’s original footage was amazing before it was given a new theme tune.

Some my argue “fair use”, but that can be difficult to prove, and with no real indication as to who actually appropriated the content it would be tricky to pursue any kind of action anyway.  Filing a DMCA takedown notice with YouTube (in which case the video may not be around for long, knowing HBO) is probably about the extent to which something like this could be taken.

For a comparison, here’s the actual Game of Thrones opening sequence.

Our friends at Fstoppers report that the camera used to originally capture these images was the Nikon D70s, mounted to the “Burbulyator LT BBR-2010” and left from anywhere between two to eight days to capture each sequence.

While we’re pretty used to seeing timelapse footage these days, it’s usually just clouds, starfields, pedestrians or traffic with half an hour being compressed into a couple of minutes.  Here, with chunks of several days packed into a few seconds at a time, the results are absolutely enchanting.

The Burbulyator itself is also a very interesting tool.  First shown off six years ago, the device allows a camera to rotate around a central point, with its gaze following the subject throughout the sequence.

It’s a very cool looking toy, and definitely offers up a few ideas for devices we can build ourselves to add a little motion to our cameras for video and timelapse sequences.

A device working on a similar principle was used at a much larger scale to film bullet time style slow motion segments of a fight sequence between Imhotep and Teal’c during an episode of Stargate SG-1 in 2002, explained and demonstrated in the DVD Extras.

No word yet from Nick on how he feels about his footage being used for this video, but if we hear anything, we’ll let you know.

Do you think that it should fall under fair use?  Or should the video be taken down and the infringer pursued as much as feasibly possible?  How do you feel about “Remix culture” in general?  Let us know in the comments.