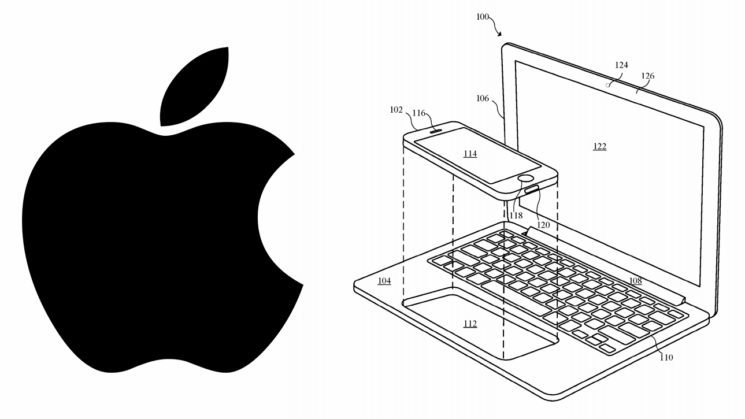 It’s not exactly a new idea, but we all know it’s not cool until Apple does it. There have been attempts at a device like this a couple of times before. But it’s just never really taken off. We’re talking about a laptop-like dock for your smartphone. The only one that’s seen any kind of popularity at all is the Motorola Atrix Lapdock. And even that is more amongst the Raspberry Pi crowd than its originally intended target.

Published recently by the US Patent and Trademark Office, Apple’s patent provides their take on the idea. And the idea is very cool. It would be very handy to be able to just plug my phone into a larger screen and keyboard while away from home. But can Apple pull it off? Or is it another “me too!” device that’s doomed to fail?

It’s billed as an accessory. A “thin” device which extends the functionality of another device (your iPhone), but is inoperable by itself. It will have no independent processor, although it can offer some support. The patent says that it could contain a GPU or other hardware to help accelerate the phone’s performance. Given the general demands placed on laptops, this certainly wouldn’t be a bad idea.

Aesthetically, the build description seems similar to that of the MacBook Pro. Except your phone will take the place of the MacBook’s trackpad. It’s suggested that it will be made from aluminium or another lightweight, strong composite material. The LCD would also offer touchscreen abilities, so you wouldn’t solely be relying on your phone for interaction with the UI.

It’s also suggested in the patent that a similar device might become available for the iPad. This, however, would not contain its own screen. Instead you’d use your iPad’s screen, and bolt on a keyboard & trackpad. Essentially, this turns the iPad into a 2-in-1. Something like the Asus Transformer Book – which is my current location backup and mobile “keeping up with social media” solution.

It hasn’t yet been stated exactly how the iOS device will communicate with the dock. It could be a standard Lightning plug, or go wireless with Wi-Fi, Bluetooth, or some other technology. But it will be interesting to see if Apple are able to make a success with this type of device where so many others have tried and failed in the past.

The Motorola Atrix Lapdock mentioned above was shown off at CES back in 2011. Samsung also filed their own patent for a similar device to accompany the Galaxy Note back in 2015. It’s possible Samsung could’ve actually pulled that one off, if not for the Samsung Galaxy Note 7’s early demise.

Given the power that the iPad now has with the transition to the iPad Pro, adding a keyboard and trackpad makes a lot of sense. From a productivity standpoint, being able to type on a real keyboard, and interact with content in a more laptop fashion is huge.

Even as an iPhone addon, being able to slip your phone into a laptop style dock is very handy. Especially for social media on the go. I interact a lot on social media, especially when I’m away from home, and that on screen keyboard gets very annoying.

Let’s just hope that if Apple do bring this to reality, it comes at a decent price point.

« Watch a sea lion trying to check what a cameraman tastes like
Making sense of aperture, shutter speed and ISO with the exposure triangle »