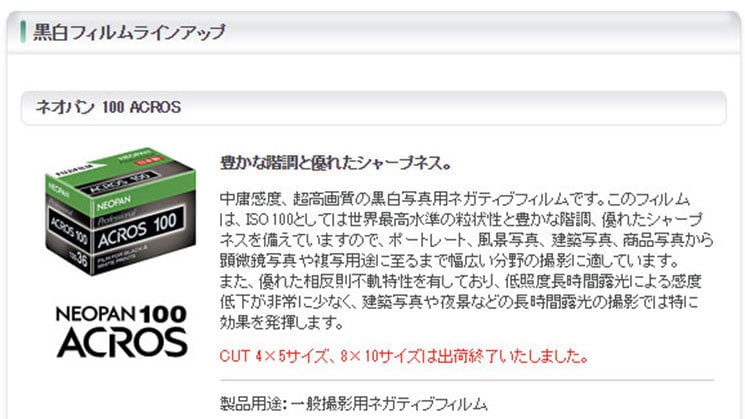 This is an odd one – but very cool. Fujifilm has spent the last few years systematically killing off all their film. Apparently, though, they’re considering starting up production of some black & white film stocks again.

There might be a little lost in translation here, but the news was posted to Yahoo Japan (from ITMedia News). They say that Fujifilm is considering bringing back some of their discontinued films due to popular demand.

The ITMedia News story quotes a report from Fujifilm saying they have received many requests to bring back their black and white films. Now they’re looking into whether or not it’s possible. They say they have “not yet solved the problem of raw material procurement difficulties at this stage”.

It’s currently unclear exactly which black and white film stocks they may introduce. And they do stress that right now, they’re still investigating the possibility, so they obviously cannot provide a release time.

But it’s very interesting that Fujifilm seems to actually be listening and taking the feedback seriously.

So, if you want your favourite Fujifilm black & whites back, let them know. Say it loud and proud!

We’ll keep you posted if we hear more.

Yes! You Can Make Some Awesome Films With A $20 Jib