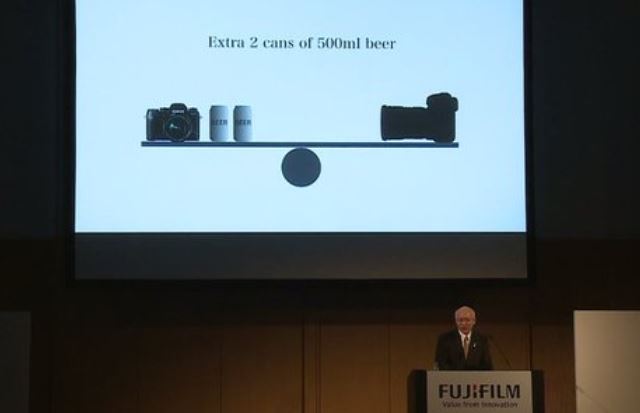 The debate over which system is better, DSLR or mirrorless, is on its way to becoming as heated as Canon vs Nikon.

As mirrorless systems improve and catch up to DSLR cameras, or in some aspects outdo them, the decision which to get isn’t as easy as it used to be.

One of the main advantages of mirrorless cameras is that they are much lighter, and that’s exactly the point Fuji’s vice president demonstrated today – in the most awesome argument made to date.

Fujifilm’s senior vice president Toru Takahashi spoke at a press event earlier today, following the company’s announcement of the long-awaited flagship X-Pro2 and several other cameras, and made a strong argument in favor of the new cameras.

While obviously humorous, a slide in his presentations showed that a DSLR weighs two 500ml cans of beers more than its mirrorless counterpart.

It’s not that saying the camera is 1 kg or 2 lbs lighter doesn’t sound significant, but comparing it to everyday items probably drives the message home better. Sure, he could have compared the weight difference in photographic equipment, but this was a brilliant comparison from a marketing point of view – the proof is that you’re reading about it right now.

Anyway, the weight saved by using a mirrorless camera can almost be “exchanged” for that of Fuji’s largest telephoto lens – the 100-400mm. Weighing it at 1.375 kg the lens will make the DSLR almost a beer can lighter, but there’s not much you can do with a camera and no lens, is there?

The slide was made public by a representative from Wex Photographic who attended the event and found it worthy of a tweet:

So Over The “Overly-Retouched” Argument

The Last DSLR I’ll Ever Need