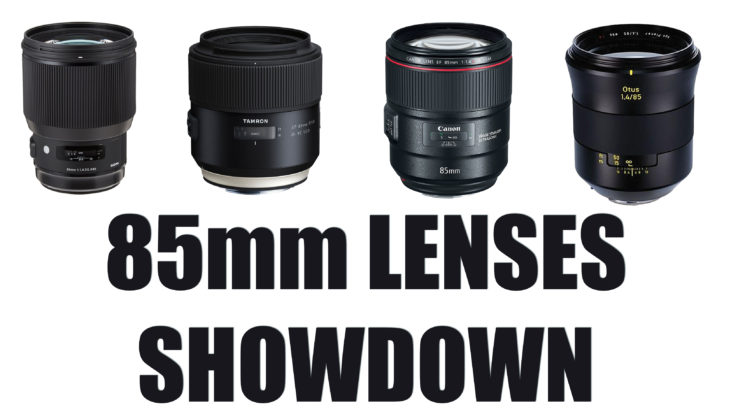 85mm is a commonly used lens, very much loved by portrait photographers. If you’re thinking of buying one, photographer Dustin Abbott is giving quite a detailed comparison in his two new videos. He compares four top 85mm lenses: Canon 85mm f/1.4L IS, Sigma 85mm f/1.4 ART, Tamron 85mm f/1.8 VC and Zeiss Otus 1.4. So if you still haven’t made the decision which one is right for you, this video might answer some questions.

Dustin starts with the comparison between Tamron and Canon. He shot wide open on both lenses, and it appears their performance is more or less equal. Later on, he compares Sigma and Zeiss. Zeiss gives excellent performance in the center of the frame, although it has some vignetting on the edges. As for Sigma, Dustin notices some chromatic aberrations in the center of the frame. However, it seems to have a more even performance along the edges than the Zeiss.

When Tamron and Zeiss are compared wide open, Zeiss seems to be an obvious winner when it comes to the center of the frame. The image looks a bit sharper and more contrasty. According to Dustin, Tamron has a more even edge-to-edge performance. Between Tamron and Sigma, it seems that Sigma is a hair better both at the center of the frame and along the edges when both lenses are wide open. Sigma’s widest aperture is f/1.4 and Tamron’s is f/1.8.

Dustin goes on comparing Tamron and Canon, shot at f/2. From his preview, it seems that the lenses are roughly even in terms of the center of the frame. When it comes to the edges, Tamron shows a better performance.

When Zeiss and Sigma are compared, the difference is pretty obvious. Zeiss produces a sharper image with more contrast in the center of the frame. But it seems that Sigma’s quality is more consistent edge-to-edge.

Generally speaking, Zeiss is undoubtedly the strongest performer when it comes to sharpness and contrast (with that price, it better be). Still, I’d say that the difference between three other lenses isn’t that big.

In the second part of this showdown, Dustin compares the lenses in terms of rendering, including chromatic aberrations, bokeh quality, facial rendering, actual focal length, contrast, and other details. Once again, Zeiss outperforms the other lenses.

When it comes to ghosting, Sigma and Canon show quite prominent ghosting and it has a greenish tint, whereas Zeiss and Tamron show less ghosting, and it’s more purple in color.

When Zeiss and Canon are compared, Zeiss shows slightly more skin texture. Between the Canon and the Tamron, you can see that Canon exposes slightly brighter, but preserves a bit more detail and contrast.

Generally speaking, Zeiss wins in terms of rendering, too. But according to Dustin, this may not always be good. For example, portrait photographers might find this amount of micro-contrast and sharpness too strong, because it shows too much of the skin imperfections.

As for Canon, it gives the brightest image of the compared lenses and according to Dustin, the best bokeh quality. So, if you shoot in low light, this lens can be the most compelling choice. It could be good for event photographers.

The Tamron compares well with the other lenses considering its price and limitations. Dustin suggests it gives the least satisfying rendering of skin, so studio portrait photographers probably should rather go with the Sigma. But, if you’re looking for a versatile lens on a great price, the Tamron is a good choice.

I guess it all depends on what you want to achieve and what genre you shoot most. Zeiss is by far the most expensive of the four lenses, so if your budget and needs aren’t that high, I guess any other of the three other lenses will do just fine.