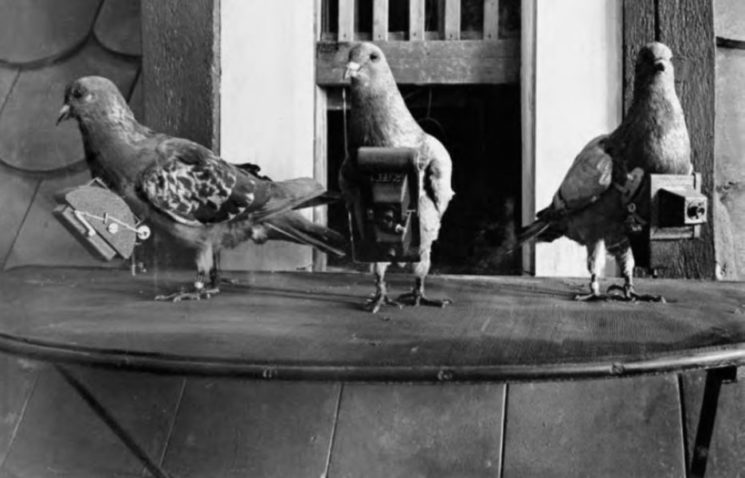 We’ve featured some pretty cool spy cameras here on DIYP, both vintage and modern. And frankly, I’ve always been fascinated by the ideas people have come up with to hide cameras for espionage. In this video from WIRED, former CIA Chief of Disguise Jonna Mendez guides you through some of the coolest weirdest, and the most popular spy cameras CIA used during the Cold War.

The first type of spy cameras Mendez mentions is the so-called “pigeon cameras.” As the name suggests, these were harnessed on pigeons, and they were invented long before the Cold War, in 1907. Years later, CIA used the same technology for espionage. The cameras would take a photo at regular intervals, and when the trained pigeons would come home, the agents would take the exposed film and develop it.

Then, there were different sorts of body worn cameras. The two most used ones were Tessina and Robot T1340. Both of them were spring wound, but agents could take photos without touching the shutter. The cameras could have been hidden anywhere: inside a shirt, a bra, a tie, a belt, a purse and so on.

A very interesting piece of spy gear was a Tropel pen camera. CIA would only give tis camera to its very best agents and those that had the best access to the subjects of espionage. Each camera was handmade, and the technology was really ahead of its time.

The last but definitely not the least piece of tech Medez talks about is microdot. I’ve heard of this before and I’m still fascinated by it. Basically, a microdot could cram an A4 page of text into a single dot. The agents would get a magazine or a newspaper from CIA with a secret message revealing them which paragraph on which page was hiding the microdot. They were also sent via letter, hidden behind the stamp. The agent would have to pierce a piece of cardboard, insert a Fresnel lens into the tiny hole, put the microdot on the other end of the lens and point it at the light to read it.

I find all these cameras quite interesting, but I’m definitely most fascinated by the microdot. Make sure to watch the entire video, it’s as entertaining as it is fascinating. And let me know, which of these spy cameras fascinate you the most?

From the Cold War: The Evolution of the Modern Digital Camera