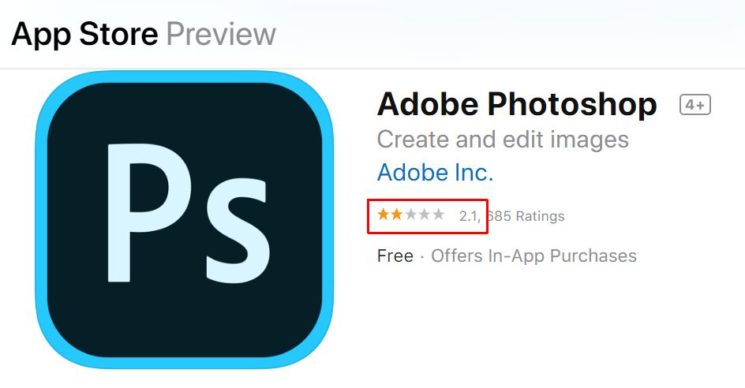 Over a year after the initial announcement, Photoshop for iPad was finally launched last week. But judging from the first reviews, even this was too early. Truth to be told, Adobe admitted that some features are yet to come. However, judging from the early reviews, the app seems to be terrible.

In the Apple Store, the app is presented as Editor’s Choice, with a pretty unusual rating for a recommended app: 2.1 out of five. Under the “Editor’s Choice” badge, there’s the following text that could make you download and try out the app immediately:

“Photoshop for iPadOS is powered by the same code base that drives the iconic desktop version, and it adds a new customizable interface optimized for touch and Apple Pencil. It’ll look instantly familiar to longtime fans. But Photoshop on iPad also feels like a new experience. To explore all that’s new, go to the app’s home screen and tap Learn for introductory videos and lessons on masking, creating composite images, and more.”

But if you read the reviews, the users don’t seem to agree. The 2-star review right next to the Editor’s Choice” badge reads that “it’s clear that this app wasn’t ready for release.” Shortly before the app’s release, some beta testers confirmed that there were some key features missing. Apparently, many users have the same impression.

At the moment of writing this article, there are nearly 700 ratings, with an average rating of 2.1/5. People have also tweeted about Photoshop for iPad, complaining about all sorts of drawbacks and issues:

My review of Photoshop for iPad pic.twitter.com/ujlIbj2a6f

Photoshop on iPad is out pic.twitter.com/GmxZJvDwuM

I'll admit I was a little worried that Photoshop for the iPad would take a chunk out of Procreate's user base but discovering that my hunch was right that Adobe would boof the whole thing is both comforting and frustrating. They have no understanding of their artist users at all.

here’s my feedback on photoshop for ipad! mine didn’t need to lag to be horrific. pic.twitter.com/YzM5prdDIV

in the case of photoshop on ipad v1, it was the team’s judgment to nail perfect PSD support, a few workflows and rethink features / UI, and NOT just port 30 yrs of stuff (and baggage) on day 1. and it’s our burden to prove the value and exceed expectations.

In a recent interview with PetaPixel, Belsky said that “thirty years of features dropped on our customers on day one is a recipe for failure.” He noted on Twitter that the v1 of the app can’t please everyone, and since it’s a reimagination of a 30-year-old popular and global product, it “will displease many.”

a real-time v1 lesson: you’ve gotta ship an MVP to start the journey, but it will be painful at first. by definition, it won’t please everyone (and if it’s a reimagination of a 30yr old popular/global product, will displease many) pic.twitter.com/LaJ6oJlwcD

Judging from the early reviews, the first version of Photoshop on iPad has indeed displeased many. However, there’s always room for improvement, and I believe that Adobe will work on improving its latest app in order to bring the best experience to iPad users.

« Pelican launches the Vault Photography Collection – A new line of lightweight rugged cases
Irix expands their cinema lens range with the 45mm T1.5 and more on the way »