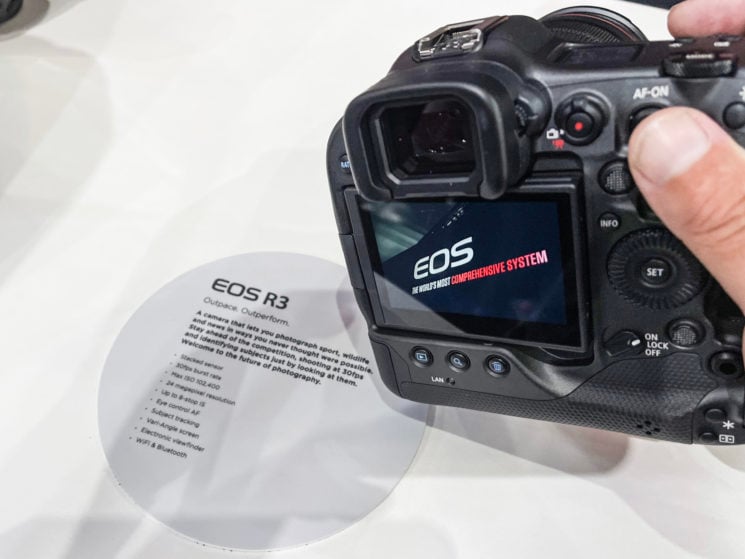 I had the opportunity to get my hands on the recently announced Canon EOS R3 at The Photography Show. Let me tell you how that went for me.

Canon teased the EOS R3 and the world waited in anticipation following news of Covid-stricken production facilities. This addition to their squad of pro-mirrorless cameras is, so far, very well received by most people. I walked up to the Canon stand this afternoon to see huge crowds. The majority of the people there were gathered around the R3 and, after waiting patiently for it to be my turn, I got hold of one for real.

My first impression of the aesthetics is good. The main control section is intuitively placed for my thumb and fingers to naturally fall onto them. This is a huge factor for me because I want to be able to change settings without lowering my camera and fiddling around. This is replicated when the camera is twisted into portrait orientation with the key controls remaining in the same place for the new angle.

The focus tracking was quite something. I tested it out by following people around the booth. The camera is marketed as being able to identify the subject just by looking at it. This clearly is the case, as the icons on the screen dynamically surround a subject. I tried to confuse the camera several times but the focus-tracking lived up to the claims Canon makes.

One of the most innovative features is the Eye Control, which is revolutionary. It’s something Canon abandoned some time ago and has now picked up again. I didn’t get to try it out properly, but when I had a quick go it worked. I can’t say for sure that it would work each and every time for different users. I’m not sure I would rely on it alone but it is truly intuitive, and if it continues to work well it’s superb. If you turn Eye Control off, the joystick still remains and together with Infrared Smart Controller, the focus point can be controlled as before.

In burst-mode the camera is capable of 30fps, but without a mirror, they are 30 silent frames. For a wedding photographer or someone else who works in low-light, high-pressure situations, this is a genuine ‘get out of jail free’ feature.

The ‘R’ series from Canon bought a tweak in the design standard. This EOS R3 seems to be a fusion of those contemporary design elements with a splash of classic Canon here and there. The layout is similar to the layout of the DSLR equivalent but notably smaller. The most obvious space-saving difference is the lack of a substantial hump on the top of the camera, owing to the lack of the need for a prism in the viewfinder. My first thought on this is that it becomes far more well-suited to fitting into our camera bags with the better shape.

The articulated preview screen seems fairly sturdy. I wasn’t going to start twisting and stressing it in front of the eagle-eyed staff at the Canon stand, but with the limited bit of testing I was able to do I found no problems. The display is a touchscreen, and very responsive.

Ergonomics is something I always look for in my gear. I specialize in cold weather photography, so I want to be able to use all my gear with gloves on. While handling the EOS R3 I noted that the controls are chunky enough to be operated easily with gloves on, whilst feeling good and well constructed with bare hands.

My hands-on experience with the EOS R3 was good. I think Canon has played it well with the entry of a pro-level mirrorless camera.