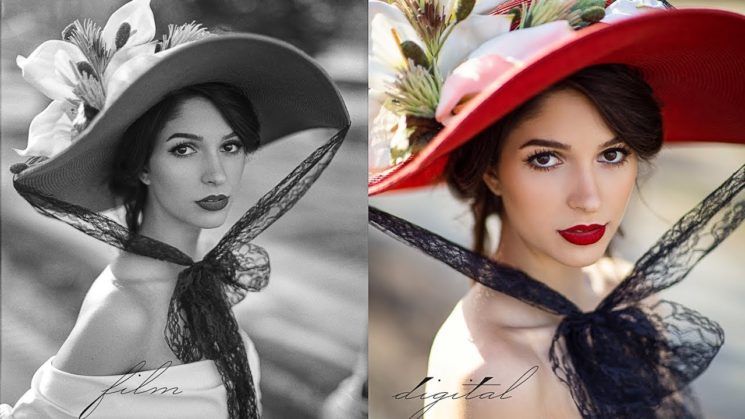 Film vs. digital is hardly still a debate if you ask me, but there are still reasons to think about which option is better for you.  You may want to switch from film to digital or the other way around. Or perhaps you want to shoot both. If you’re wondering about the pros and cons of film and digital, Irene Rudnyk has an interesting video. She photographs her model using both a film and a digital camera and discusses some plus and minus sides of both kinds of photography.

For starts, this is the gear Irene uses in the video:

With a film camera, you get the number of shots determined by the film you use. In Irene’s case, it’s only 15 shots with the Ilford HP5 Plus. With a digital camera, you can take hundreds of photos.

Still, with a limited number of film shots, you are likely to pay much more attention to details. You’ll want to get the shoot as good as possible in-camera and make the best out of your film roll.

When shooting film, Irene doesn’t shoot wide open because the background gets soft and blurry even at f/2.8.With the digital camera, she shoots at f/1.2 to get the same result. Still, this depends on many factors, such as the cameras and lenses you’re using, and your preferences, of course.

Well, the obvious advantage of digital photography is in the time between taking them and transferring them to your camera. It only takes a couple of minutes to transfer the photos from a memory card to your computer. With film, you need to develop it first, and then scan it if you want to have the photos on the computer. Irene uses Epson V600, but there are a few DIY methods too if you feel like experimenting.

As for editing, Irene uses Photoshop for both film and digital. The difference is that film photos take her much less editing time. Although sometimes there is some dust to be removed, the film is generally more forgiving for the skin so the editing process only takes a few minutes.

Irene’s digital kit costs around $3,900 USD, minus the accessories. Her film kit costs around $800 USD, minus the chemicals, accessories and the film. Still, this depends largely on the camera and lens types you want to use, the sellers you buy them from, and whether you develop and scan the film yourself or take it to a lab. I’ve read a couple of times that film photography generally turns out to be cheaper than digital, despite the general opinion that it’s expensive. But personally, I’ve never done the math.

To sum up, both film and digital photography have their pros and cons. It’s just up to you to see what your priorities are and what you want (or don’t want) to learn. Like Irene, I like the look and feel of film photos, and I think it can’t be achieved by adding a VSCO or any other filter to a digital image.

I shoot film from time to time, especially when I want to challenge myself. But on the other hand, the convenience and speed of digital photography are what makes me use this medium more often. Ultimately, there is no right answer to the question “which is better,” it only matters which is better for you. But if you ask me, I’d say: “Why don’t we have both?”

[FILM VS DIGITAL, which one is better? via SLRLounge]

What are the advantages of young cinematographers today?