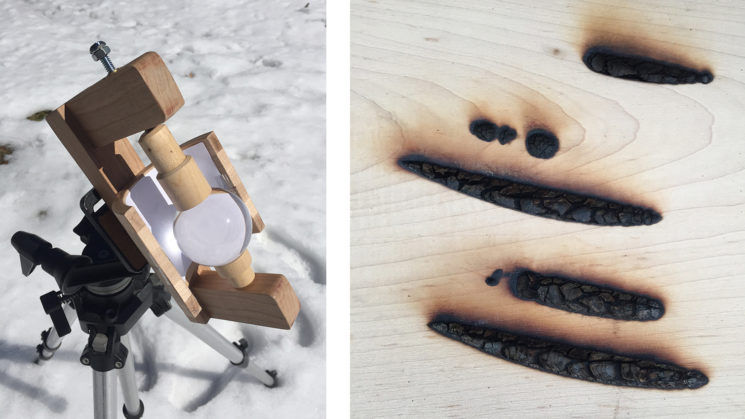 I have been interested in building a device that would record the intensity of the light from our sun for a while. This past month, a colleague of mine brought to my attention a simple way to do this. Professor Michael Peres was working at his desk on a Sunny day in January with the sun low in the sky; He started to smell something burning. After hunting around his office, he discovered the sun was imaged by one of the large decorative lenses on his window. The sun had been focused onto the wooden side of his wooden desk. When he showed the burn marks to me it was obvious the desk had been smoldering for several months.  The pattern burnt into the side of the desk was a record of the intensity and path of the sun. 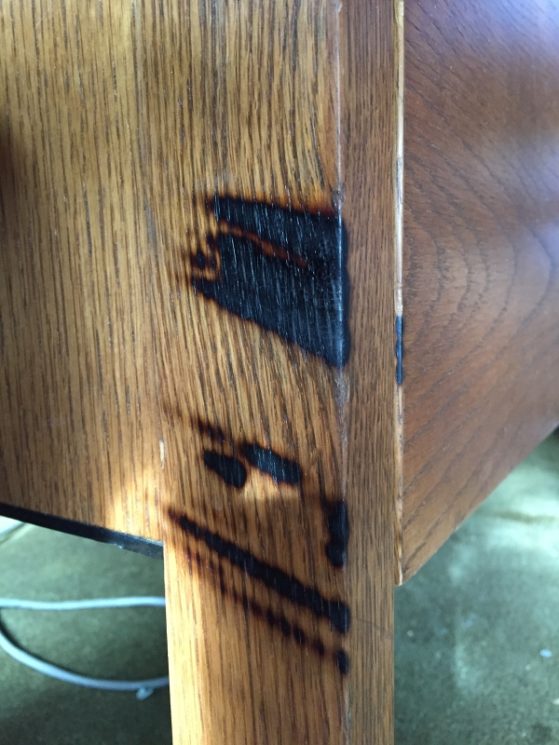 The edge of the desk where a lens focused the sun. Very lucky nothing caught on fire. The burn marks indicate the sun has been focusing on the side of the desk for months.

During the next few weeks, I experimented with several different ways to make a record of the intensity of our sun. The first technique I tried is probably the easiest. A large 6-inch condensing lens recovered from an old photographic enlarger was mounted to a support and placed at its focus length over a sheet of maple. I chose maple because it is dense and it would be difficult for the light to burn through the 5/8-inch thickness of the wood.  The whole assembly was angled so that the lens was focused at noon. The system was left to record the intensity of the sun by burning a trail across the board. To record a new path -the board was moved one inch every day. When the sun was covered by clouds the board was not moved since it did not record a path.  The recorded path is a record of the sunshine, but the width of the burn mark changed with the changing focus of the system. As the sun got lower in the sky, the off axis focusing made a large burn mark. Keep in mind that at any time the wood has the potential to burst into flame. 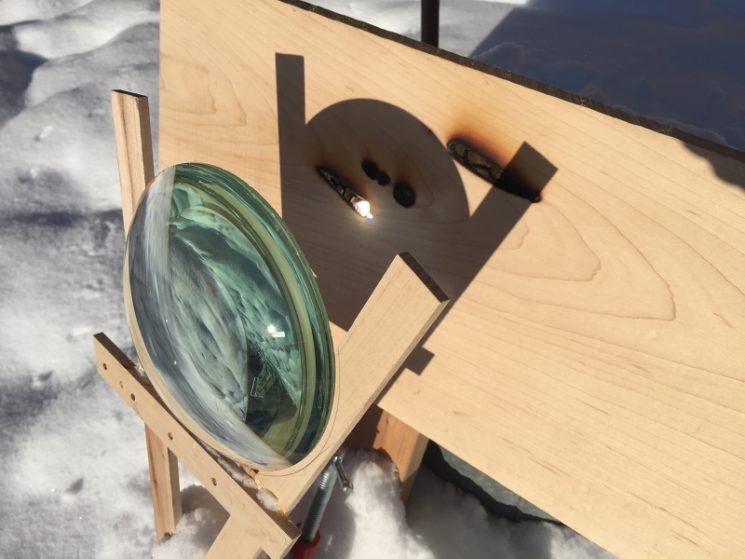 A surplus lens mounted at the focal point burns a record of the intensity of the sun. This is probably the easiest recording system to build. Note the three days of sunlight recorded in the burn marks on the wood. 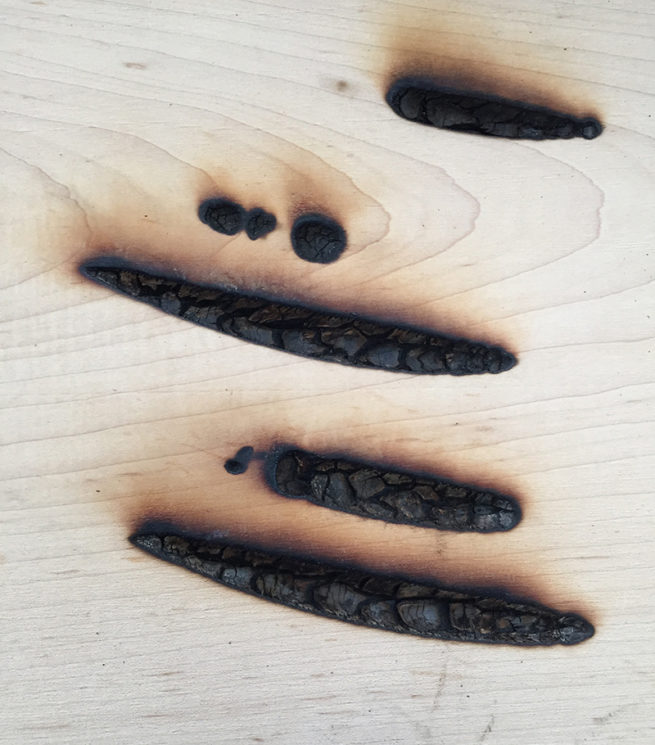 The record of five sunny days in early January are displayed here. The wood is 5/8-inch-thick maple.
The sun only burnt about half way through the wood on the brightest day.

WARNING!! Keep this experiment outside and be sure that there are no combustible materials anywhere around the lens and board.

This system worked well, but what about a more precise system? A better designed instrument can be found in the history of optical instruments.  The Campbell-Stokes solar recorder is a device specifically invented in 1853 for this purpose. Sometimes called a Stokes Sphere, this device uses a glass sphere and records the intensity of the sun by burning a path on a sheet of paper. I found an optical glass sphere on the web, it turns out that they are popular for cell phone photography. Mounting the sphere at the center of an arc of wood proved to be a simple design. Since I could not find a cylinder of the exact radius I was looking for, I cut a cylinder of wood on a lathe. (In hindsight a half cylinder could have been easier bent out of a metal sheet.)  I used a ¼ -20 screw thread on the bottom to allow easy mounting to a camera tripod. A small sheet of paper is taped to the wooden arc to collect data. To get the optimal angle the rig is aligned due south at solar noon and the angle is adjusted so that the sun is imaged in the center of the wooden arc. If I want to collect data for several days on one sheet of paper, I can set the image of the sun to the top of the arc. As the sun goes higher in the sky here in the spring and the image is reversed on the paper. For best results the paper should be changed every day. 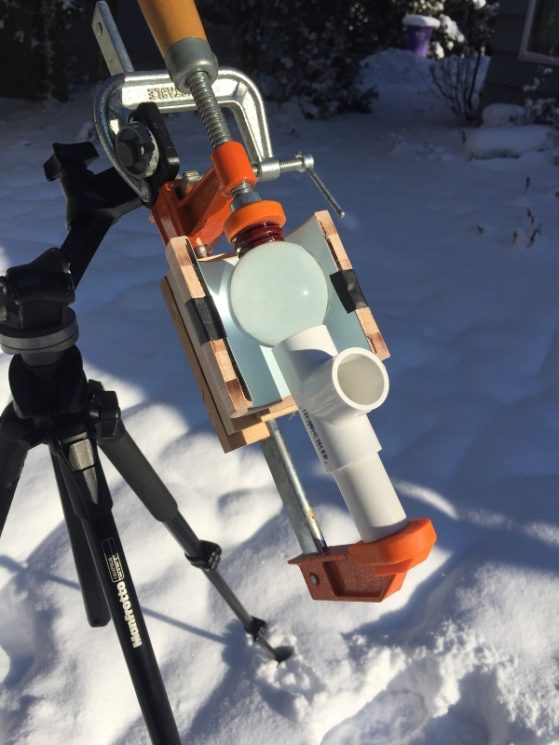 A prototype Stokes Sphere recorder made out of wood and PVC piping held together by a woodworking clamp. 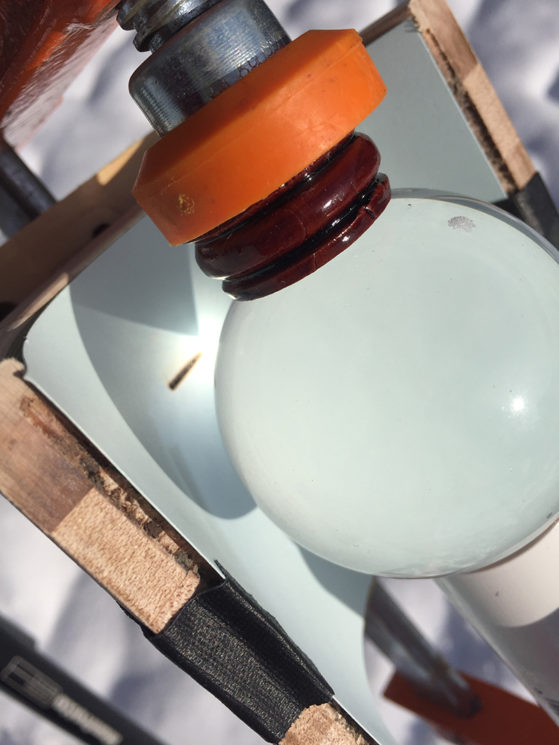 The Glass Sphere recorder burns a record of the sun’s intensity in a paper sheet.

An even simpler design would use the water filled glass sphere from a snow globe or a glass Florence chemistry flask. Keep in mind that in cold temperatures, it is better to replace the water with car windshield washer fluid that will not freeze.

This technique is a hands-on way to see how the solar intensity changes over time. There are a number of electronic instruments that do the identical thing with much higher precision. The National Oceanic and Atmospheric Administration (NOAA) has maintained a number of these instruments of years in just about every major city. The data is easily available on the web for anyone to use. In collaboration with my brother Andrew Kinsman, we decided to replicate the wood burner with postscript code. Andrew is a retired software designer who specialized in postscript code, so he made the following graphics for several cities around the United States to show the difference in sunlight in some of these cities. The plots below convert the recorded light levels into 256 levels of gray where pure white is the brightest light and black is no light from the sun. This is a good visual guide to show the different amounts of sunlight that different cities receive.

Rochester New York, is on the left while Tucson Arizona is on the right. The blocks represent hours left to right and each day is represented by a two pixels high band. The year starts at January 1, 2010 at the top and goes to year end at the bottom. This is a digital equivalent of leaving a block of wood out for a year. Note the more sunlight the brighter the image ; unlike burning wood which gets darker with more light. 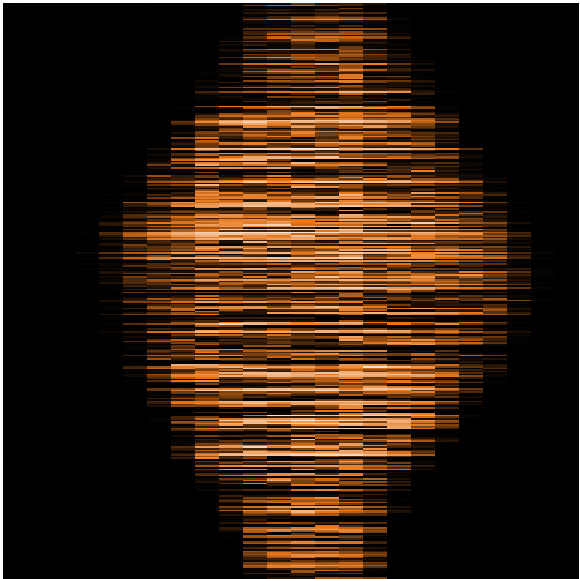 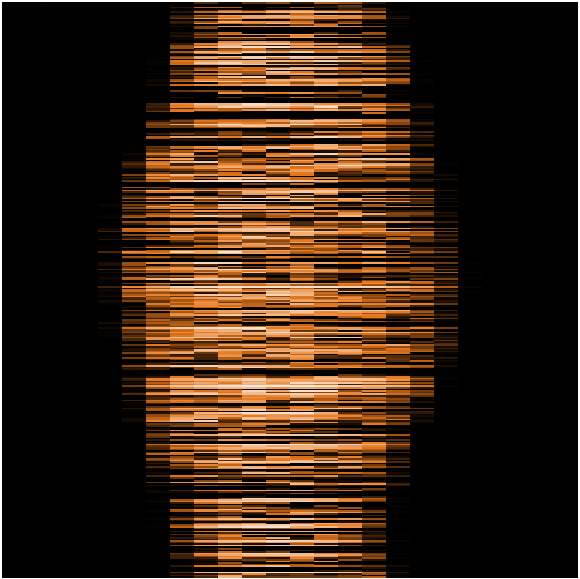 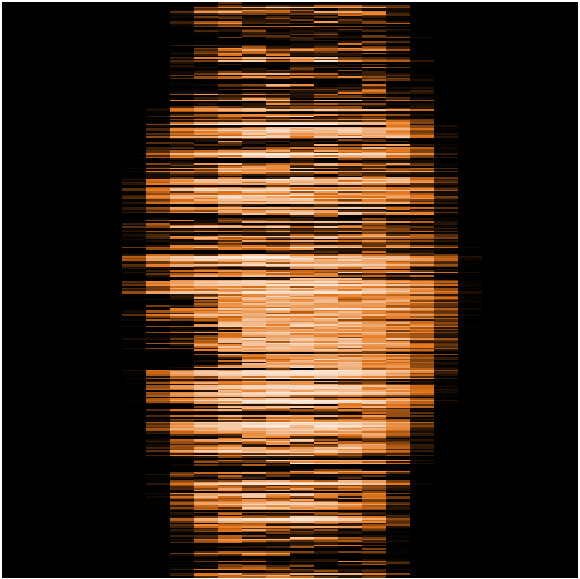 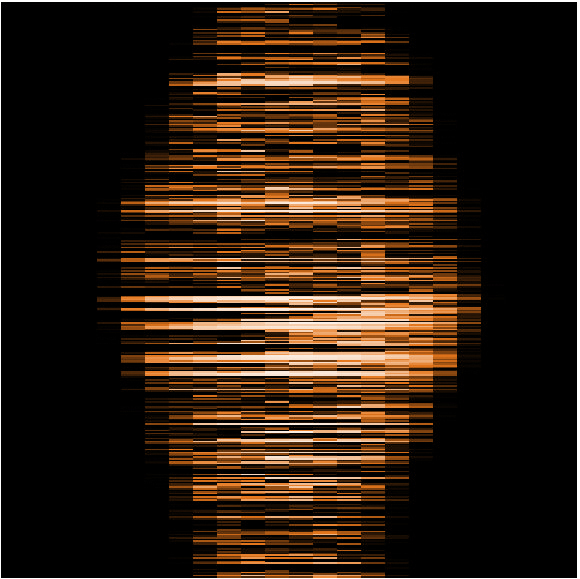 If you decide to replicate the wood burning solar recorder please take fire safety into consideration and only experiment where there is zero chance of fire. The reader will note that these experiments took place in a snow filled back yard.

Ted Kinsman has worked as an optical engineer, a physicist, and a physics instructor before joining RIT to teach the technical side of imaging. Kinsman teaches classes in photographic instrumentation where students control cameras with micro-processors, a high-speed imaging class where students photograph bullets in flight, and a class on scanning electron microscopes. He has published numerous articles and books.

How to make a beautiful DIY camera grip from a block of wood
« Twitter urges all users to change their passwords after major security bug
Film vs. Digital: here are some advantages and disadvantages of both »