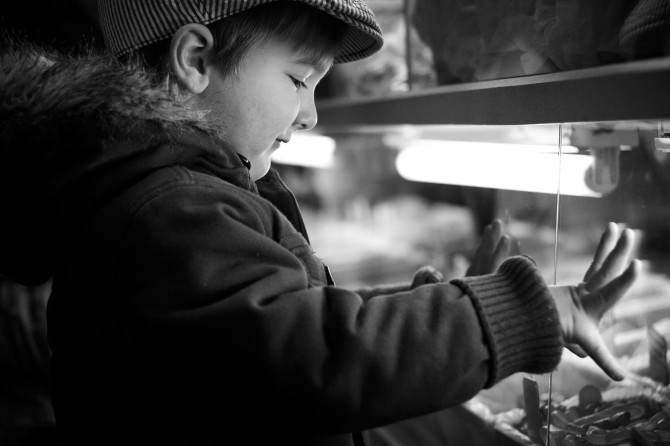 He is one of the most iconic American photographers, an innovator in his time responsible for aiding in the awareness that led to the preservation of some of our most spectacular natural treasures. He has left millions awestruck by the imagery he captured and inspired millions more to aspire to follow in his steps. His skills were commissioned by government agencies, and the value of his original prints stretches well into the millions. He is Ansel Adams, and his camera was an outdated, antiquated piece of rubbish.

I am certain most, if not all, photographers have experienced it at one time or another: the feeling that you and your skills are made inferior by the equipment you are using, a condition commonly known as camera shame. We shrink back into the shadows around other photographers with “more-pro” gear than us, we avoid conversations with photographers who are knowledgeable about equipment, we miss or turn down opportunities out of embarrassment, and we find ourselves tripping over ourselves in the pursuit of “the next great thing” in hopes of being able to hold our heads high in public.

Heck, we all experience it at some point or another throughout our lives, whether it was that Trapper Keeper we couldn’t afford in third grade or the beatermobile we had to drive in high school (or those of us still driving a 20-year-old domestic whip) or the house we live in that doesn’t have the perfect landscaping and new hot tub like our friends down the street. But, one lesson that comes with age and wisdom is that none of that changes who you truly are or, in any way, alters your skills, talents, and abilities.

Why we experience it

We can debate for eons the natural human propensity towards dissatisfaction, but this is not a discourse in human psychology. As it specifically relates to the topic at hand, we experience shame about what we have because we are told to.

1. We are continuously bombarded by advertising from manufacturers informing us of why their previous product that we saved to purchase is no longer a reliable or sensible choice. They would have us believe that we are somehow missing out on a wealth of our own undiscovered talent by sticking with gear that a few short years ago proved to be more than enough for our limitless imaginations. The very naming of the products often marks our equipment with age and antiquity.

2. The photography industry as a whole is a never-ending stream of reviews and endorsements and claims of why the latest piece of gadgetry is a must-have for a particular level of artist. We have the workshop circuit operating under the guise of education that often is little more than a giant promotional push for what’s new on the market. Popular Photographer X gets free gear from Giant Manufacturer Q in exchange for singing the praises of their latest toy, wielding their power of influence over the eager masses of followers and aspirers below them. Popular Photographer Z publishes a cool image that they captured, but, instead of discussing the process and forethought and creativity that went into it, they only mention the camera that, in reality, only gave them a 3% increased advantage over that which they had previously used…but those looking on are left to believe it was the camera that made the difference. The list could go on…

3. And, then there are those photographers who, whether out of their own insecurities or ignorance or thirst to be a jackass, take it upon themselves to deride others who have “outdated” equipment or fail to measure up on their Holy-S@#t-You’re-Almost-As-Awesome-As-Me-ometer. You have them everywhere, and it seems to be some law of nature that they must exist or the universe will implode upon itself. It’s like high school all over again…but with cameras…or something…

Why it does not matter

Because, it doesn’t. To put it another way that might be easier to understand… It. Does. Not. Matter.

1. On the technical side of photography, there are three principles that transcend technology and gadgetry and industry trends. They apply whether you are using a pinhole camera with a homemade negative or a Hasselblad with a digital back. They are: aperture, shutter speed, and ISO. These never change; these are the constants, the common denominator across all eras of photography.

Why is that so important? Because, without a firm grasp on this glorious trifecta, it doesn’t matter what camera you use, you will always be lacking. Knowing your specific gear is important, but knowing photography is far more valuable. So long as you have the right equipment for the job, you’re good.

2. The introduction of the new does not somehow break the old. You will be able to exact the same level of quality from your camera five years from now as you can today (provided it remains operationally sound). Hell, I have an Argus C3 that still takes the same beautiful images today as it did in 1939, despite countless advances in technology. In fact, my favorite camera ever was a vintage Fujica 35mm SLR, and, perhaps it’s just nostalgia, but I swear it took more beautiful and consistent images than any digital camera I’ve ever used. Just like the introduction of digital did not mysteriously render film cameras unable to perform, so, too, will your gear remain viable regardless of what new model may be introduced.

3. We don’t need it. Sure, I’ll probably stir up more angst than a redcoat crashing a St. Patty’s party, but, if we were honest a good majority of the time, we probably don’t need the latest and greatest. Granted, specific gigs require specific equipment…a sports photographer has gotta have his long lenses, a jewelry photographer cannot get by without a macro lens, and a portrait photographer isn’t going to capture flattering images with a wide angle lens. But, while there are definitely those who can use a camera with ISO 125,000 and a shutter faster than the speed of light (speaking hyperbole, of course) to its fullest potential, the majority of us have no need for such bells and whistles. Remember, the fundamentals stay the same, and while many new features available can make life easier, it doesn’t necessarily guarantee a better result than truly knowing how to get the most out of what you presently have.

4. Probably the most important point I could make is that it is not the camera that makes the photographer. Many of the most iconic photographs by Ansel Adams were captured with an 8×10 view camera, an outdated piece of technology that many in today’s digital world would probably scoff at. Yet, his images are spectacular works of art and true testaments to the creator’s soul. The camera is simply a tool to be used in the master’s hands; the true creativity is still up to you.

Words from God Ansel Adams: “Knowing what I know now, any photographer worth his salt could make some beautiful things with pinhole cameras.”

My walk of shame

I have been as much a victim of camera shame as anyone else, keeping my camera tucked away around other photogs, (shamefully) lying about my equipment, and wrestling with an inferiority complex over not having something “more professional.”

But, I have been on an honesty kick lately, so there’s no sense hiding the truth from you guys… My cameras are outdated Canon Rebel XS bodies with cheap-ass eBay battery grips to extend usefulness and make them look more impressive (clients feel more confident with a photographer who has an expensive-looking camera), topped off with a small assortment of cheap lenses with my primaries being the Canon 50mm f/1.8. One whole setup can be purchased on Amazon for less than the average smartphone. I have rented L-series glass when the job required it, but, at the heart and soul of the operation, there still lies a very basic camera that would be laughed at my the majority of photographers. I am not hired for the fanciness of my equipment (although, there have been a few exceptions…) but rather for the work I produce.

I have often thought about upgrading and fully intend to do so, but I still feel as though there’s more life to be wrung from these little babies. Even if I upgraded to a 6D or a 1D, I’d still be putting it in manual mode, so apart from the larger sensor and various incidental features, I don’t see the demand for me to change just yet when my style and application of photography doesn’t call for more than what I have.

Do not allow yourself to be discouraged, embarrassed, or beaten down by the gear you have or do not have. Your work is a testament to you and your skill, not your camera. Stop worrying about what others say. Seriously. Just stop it. Simply ignore it and focus on creating the best images possible

The comments will be rife with ridicule that I should somehow find myself worthy of writing about photography while apparently knowing nothing about gear…to which I respond: Ansel Adams used a box.