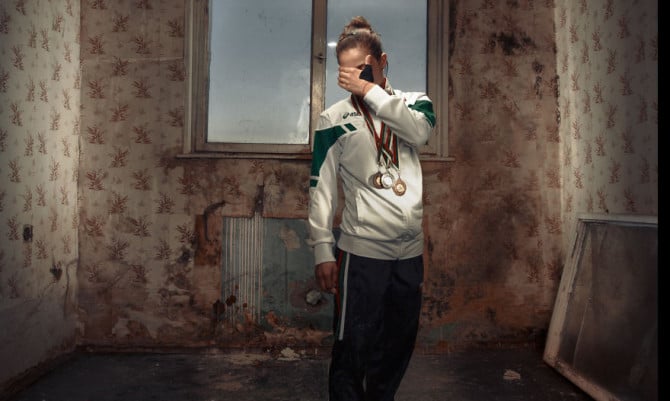 When I first saw the evocative work of Bulgarian photographer Ivaylo Petrov in his series “Portraits of Shame,” I was immediately captivated.  The series is a collection of images depicting Bulgarian athletes inside their training center in Vidin.  The most startling aspect of the project, as I came to learn, is that these are not creative images in some nostalgic urban decay environment – these are photographs inside an active training ground that’s still in use today.

I wanted to know more about the project and Ivaylo’s passion behind it, so I decided to ask him some questions.

What initially got you interested in photography?  Was it an interest in sharing stories that would typically go unnoticed by the general public?

“Talking about my very first photography ventures a few years back would really be a story with not much of an interest – just a very young man, who got his first camera as a gift and started to explore the various possibilities he could do with it.  In fact, exploring the possibilities and pushing the limits is something that I still try to do with various aspects of my work. Back then, as almost always, there was really no specific interest in a certain photography genre, let alone taking pictures of people.  I felt really awkward taking them; they weren’t my primary interest.  That being said, having a certain message in my work was always paramount in my mind, and soon after I felt that in a world which is so focused on our human society and our anthropocentric tendencies, the human presence really adds a lot to a certain idea or message that a photographer would like to represent. With time, I developed my attitude towards this, and I feel like I’ve only taken a few steps with so much more to learn.” 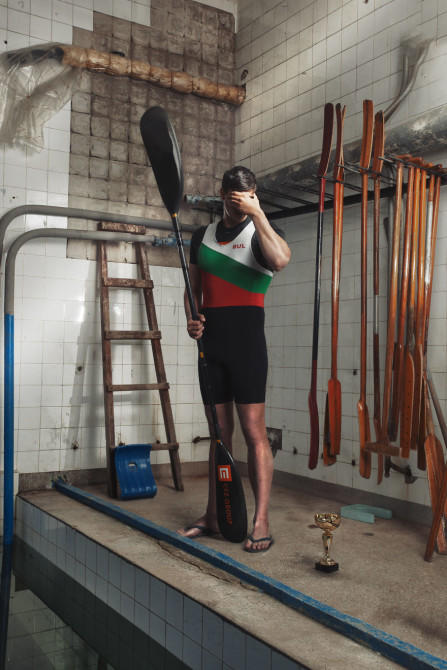 What is “Portraits of Shame?”

“This is a personal project which I photographed in the Rowing Base of Vidin, Northwestern Bulgaria, startled by the conditions under which the sportsmen there are forced to train and accomplish their achievements despite them. Some of the most successful athletes of the city agreed to take part in it, champions, who have brought numerous titles in their respective disciplines for my country.” 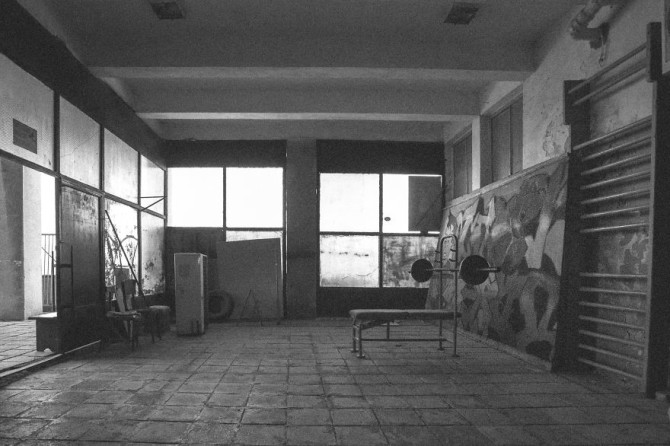 Athletic training room within the building. 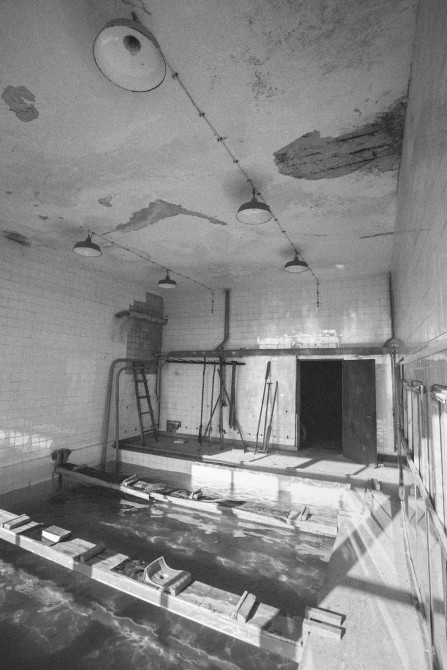 The rowing room within the training center.

How or why did you start the Portraits of Shame series?  Why did this, in particular, stand out to you so much?

“When I first went inside that facility, it was with a whole different image in mind, a simple portrait of a rower which I wanted to make. But when I stumbled upon the conditions in which all these people (and kids) train every day, I knew that I would be back at some point in time. Мy personal opinion is that one of the ‘jobs’ and moral obligations a photographer has here on Earth is to visualize and to share the best way he can the things that have truly made a mark on him as a person. In my country, there are many socio-economic issues and their roots are very deep. I felt that this project could, in a way, be a powerful emanation of them.” 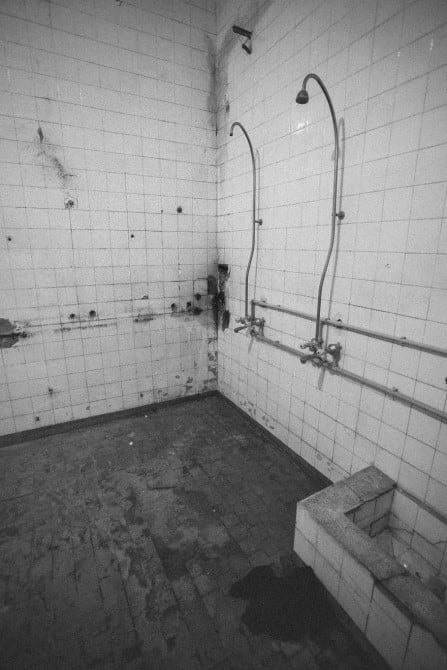 The shower room, showing the disrepair on the facility.

What ultimate goal are you hoping to achieve through the series?

“I try and remember myself the thought of Bertolt Brecht, who said that, ‘Art is not a mirror to reflect the world, but a hammer with which to shape it.’ My approach towards this particular set of works was quite direct and it has already resulted in a very, very vast social response.  The media in my country just exploded after I published this series of work and I do hope that the shape of things to come after the dust of this hammer hit has settled would be much brighter for the people there.” 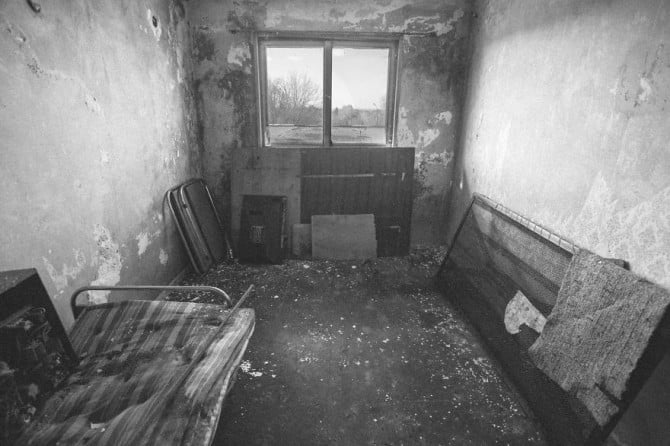 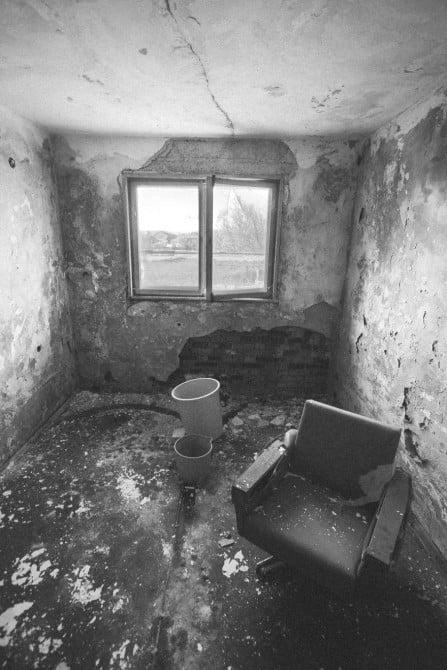 How did you gain access to the facilities and get permission to photograph the athletes?

I was lucky enough to know one of the trainers and one of the more influential people in local media, so when I first shared the idea with them, they kindly embraced it and went to great lengths in order to access the athletes and arrange the whole photo shoot in a single day. I probably wouldn’t be able to do it without them. 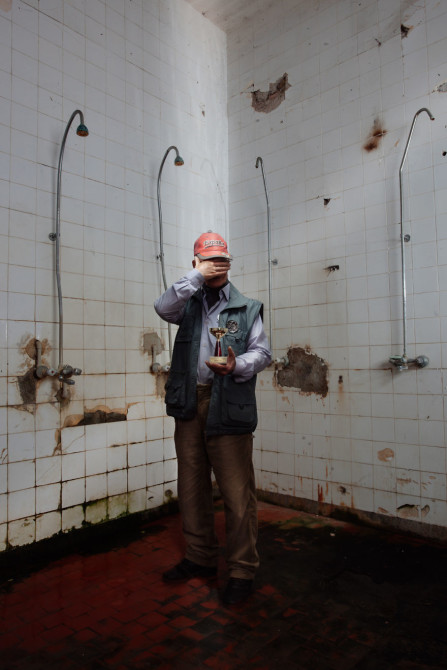 Weightlifting champion Bogomil Petrov photographed standing in the showers – still in use today – of the athletic training facility in Vidin, Bulgaria.

Is this facility still in regular use for training?

“Absolutely, this is one of the most important points of the whole series. I even got a comment somewhere around the web, it was obviously from a boy, who trains there.  I didn’t know him. He said that he never noticed it was really this bad in person, he’d have to take a second look. I find this really brutal in terms of what a person could consider ‘acceptable’ if that thing is the only thing he ever knew, especially since these works weren’t manipulated in [Photoshop].”

Are the athletes required to train there for one reason or another, or is it simply the only option available to most of them?

“This is the only option if a person is interested in rowing and water sports, and the city there, lying on the bank of the Danube River, has a very vast tradition in this particular sport.” 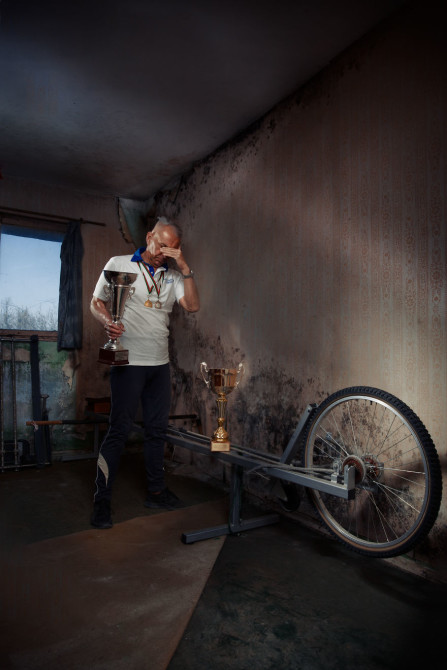 What was your approach when photographing the subjects?  What lighting and equipment did you use?

“In this case, I was sure that, in order to make these pictures work, I had to give them more of a high-level treatment.  Production quality by itself would add a stark contrast to the decay that I used for the background, thus using it as a factor to further enhance the message. This wasn’t a particularly easy thing, because I had to take some of my lighting kit on the location since I live and work in a different city.

“The lighting consists of a large-diameter fresnel lens, a diffuse umbrella and another very big white umbrella for an unnoticed and gentle fill lighting, sometimes complimented by an off-camera compact flash. The people that kindly agreed to take part in the shoot knew what they were expected to do beforehand, and since these images didn’t call for a very elaborate work with the model, each of them was made in a relatively very short time.”

If there was one piece of advice you could give to aspiring photographers, what would it?

“From my own point of view right now: Be open, be curious.  Never forget that in order to gain people’s trust and make them want to work with you, you have to be both outstanding in whatever your personal direction is, but you also have to be nice. And if I may refer to a very inspirational talk of Tarkovsky, learn to spend time with yourself and cherish your own company.  After all, only in this silence is how you could, eventually, truly hear what already lies inside you, so that you could relentlessly pursue it after that.” 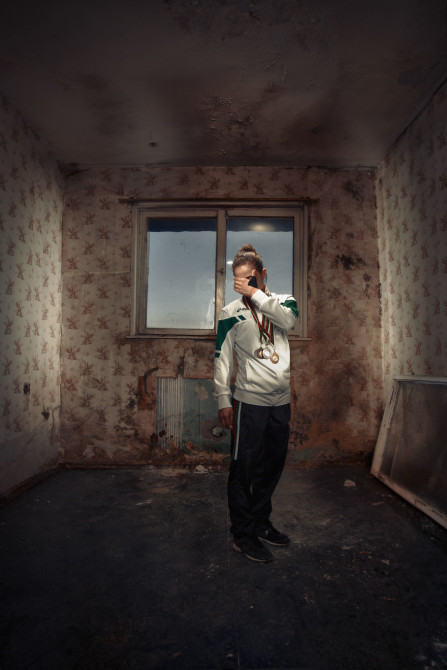