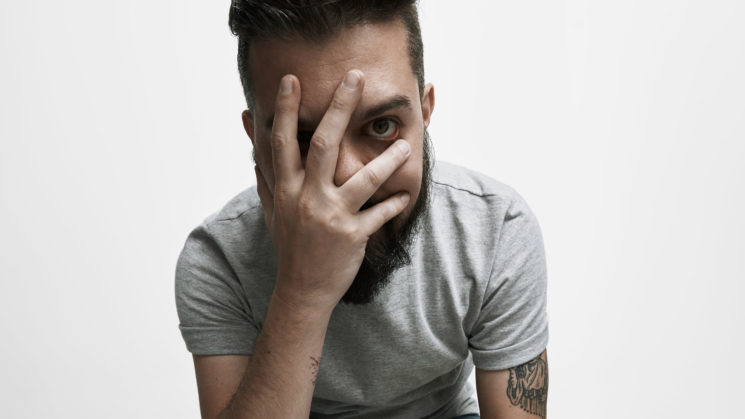 Normally, in portrait photography, using wide-angle lenses is not a common choice for most photographers. Each focal length has its own characteristics, wider lenses are known by their unflattering distortion, seen mainly at the edge of a photograph. Landscape and architectural photographers are more used to it because their need of getting more information inside the frame, but even these scenarios it is not an easy trick, it does present challenges inherent of wide-angle lenses.

Although wide-angle has its advantages, the reality is that with portraiture is really more difficult to get a pleasant image — since it can deform outlines and exaggerate the subject features. A photographer can indeed achieve an impressive looking image with more drama with wide focal length, but not without a tradeoff: the aesthetics can be exhaustive if poorly and overused.

There is a sense of immersion caused by wide-angle lenses masterfully used in the seventh art: cinema. A lot of Directors and DOP (Directors of Photography) praise the use of wide-angle not only because of its looks but for a better storytelling purpose. (Steven) Spielberg openly talks about how he prefers 21mm focal lengths in his movies, and Orson Welles is very known for his use of wide-angle and deep focus in the masterpiece “Citizen Kane”.

Maybe in contemporaneity, the most known professional using wide-focal lenses is Emmanuel “Chivo” Lubezki, an award-winner D.O.P. — who has earned eight Academy Award nominations. Chivo, for example, used a range of 17mm and 30mm (converting 12mm and 21mm from Arri Alexa 65 to a 35mm full frame crop) in The Revenant directed by Alejandro González Iñárritu. 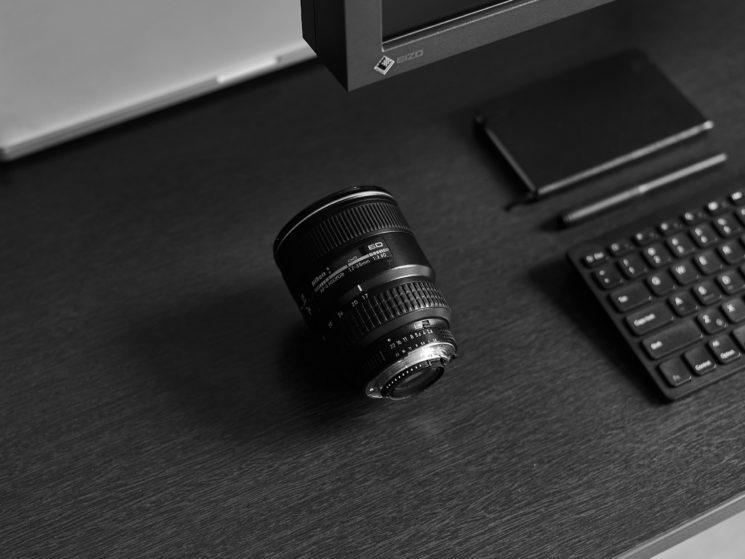 Since I borrowed a classic NIKKOR wide-angle zoom lens from a friend for a specifically commissioned work — basically using the 28-35mm range —, I decided to rent a studio for a test shoot session. As a creative, I see testing a crucial part for expanding the portfolio with more variety of work, but also as a way of consciously trying new approaches with styles and tools otherwise wouldn’t be possible. Personally, I prefer normal to mid (35, 50mm and 85mm) focal lengths (in full frame format sensors); in some cases, I have stitched together frames of 50mm lens for a wider frame of view, but with less distortion (simulating what in cinema would be an anamorphic lens). In some specific shots I have already shot wide, but going this wide exclusively in portraiture is definitely not my usual approach.

The main idea of the test shoot was keeping it simple for exploring the possibilities of going wide, that’s the reason I planned a basic white background setup with one light in a shoot through umbrella. 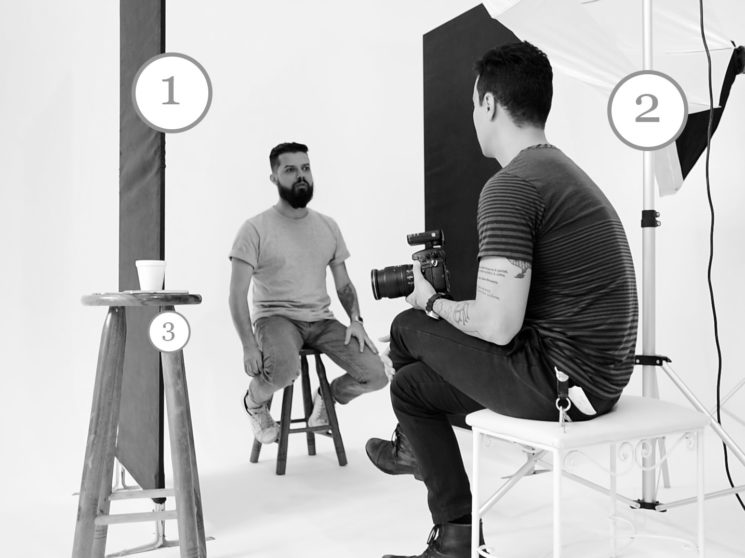 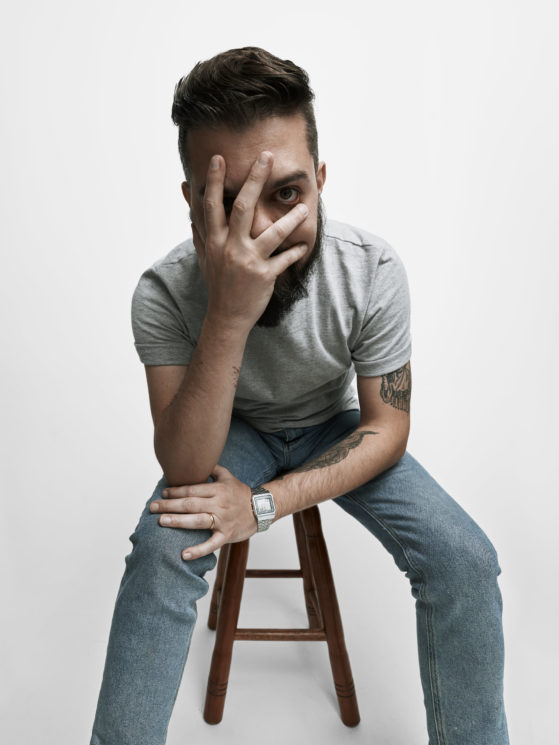 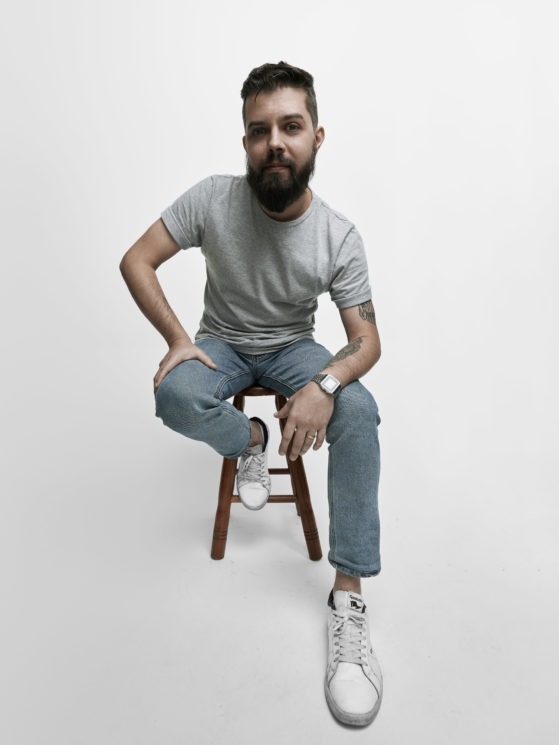 Just as a warm-up I tried getting close to the face and a little low on the ground; although I made some shot even lower and got some variations on the face, I must confess going wide-angle in portraiture is not an easy task.

Here is something interesting… After the initial tests I was talking to Tatu, and he told me he knew a guy who assisted Irving Penn. Irving Penn was a Graphic Designer at the beginning of his career (he also tried to be a painter), but it was not until he was encouraged by a co-worker at Vogue that he seriously started considering a career as a professional photographer. Quickly Irving Penn immersed himself in a prolific portraiture and still life photography with very graphic compositions and artistic eye — which later could be seen in his work in fashion and advertising. The striking elegant minimalism in his portrait always intrigued me, that’s the reason I loved when Tatu suggested an unplanned photo using the two light blockers available at the studio as a V-shaped wall resembling what would be a corner. 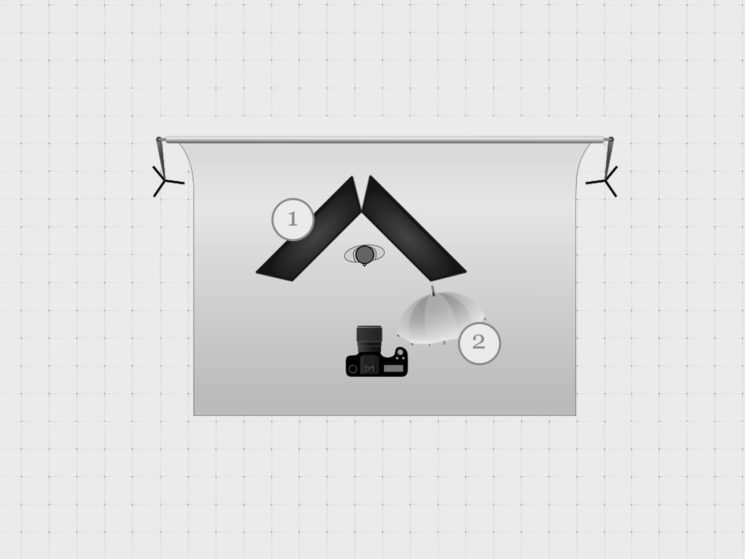 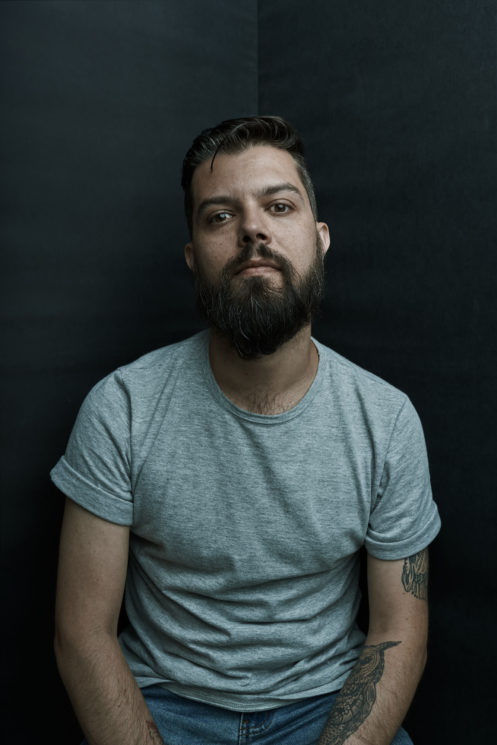 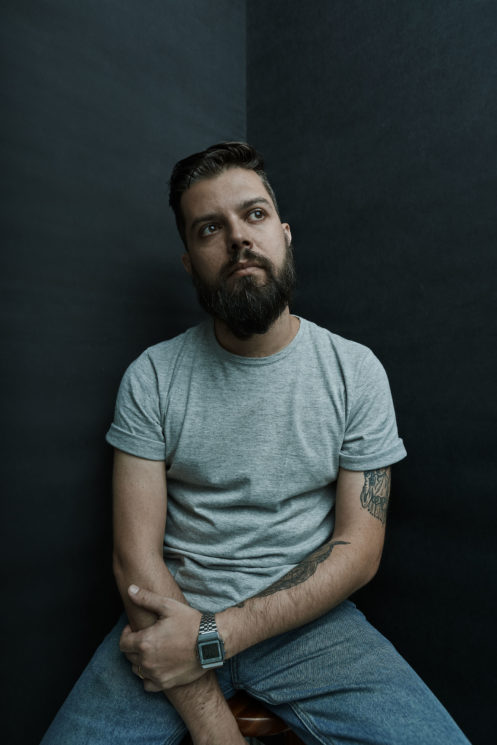 Yes, I could say it was a happy accident; but being open to the unexpected is also an advantage that every photographer must exercise more often. On this second setup, I used a 30mm and 21mm respectively but got much closer to the model. Conscious about the specific look I wanted, I was very aware of the horizontal and vertical axes alignment as well the tilting issue that could occur. Remember keeping the sensor parallel to the subject and avoid framing the subject in the corner to reduce possible distortions when needed.

For the last shot, we ramped up things a little bit. Tatu works in advertising (Strategy, Digital Marketing, Branded Content and Communication), but he has side activity: cooking. Since he is passioned about anything related to food, the main idea was to make something more exquisite mixing the styling and the prop. Unfortunately we couldn’t get a raw meat, which would be more of an impact, and actually relates more to the relationship Tatu has with food since he is extremely dedicated to churrasco (a kind of barbecue in Brazil). 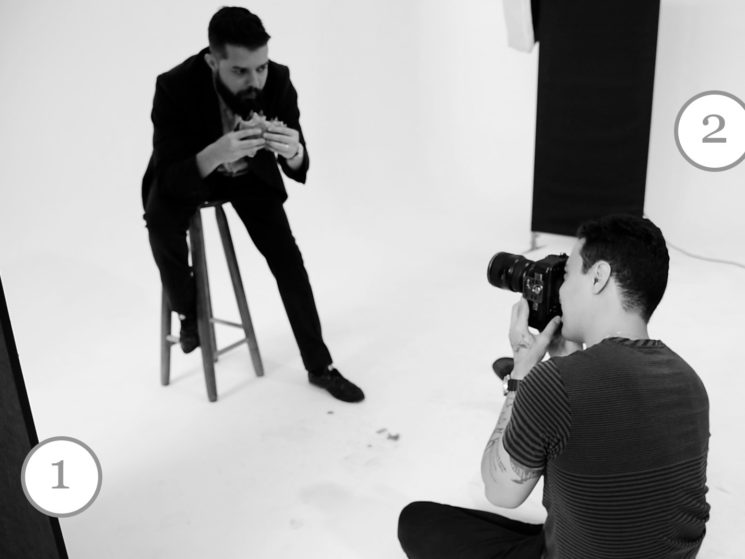 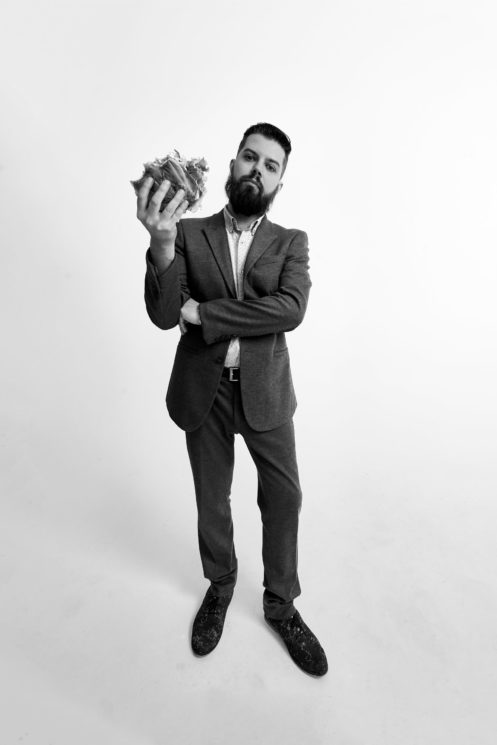 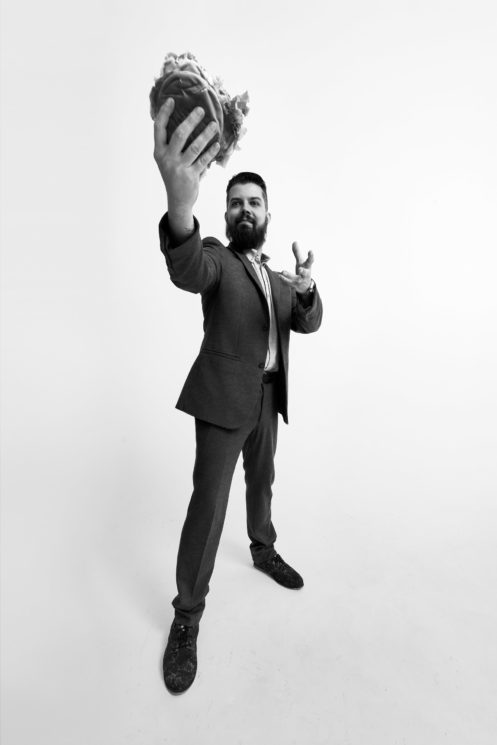 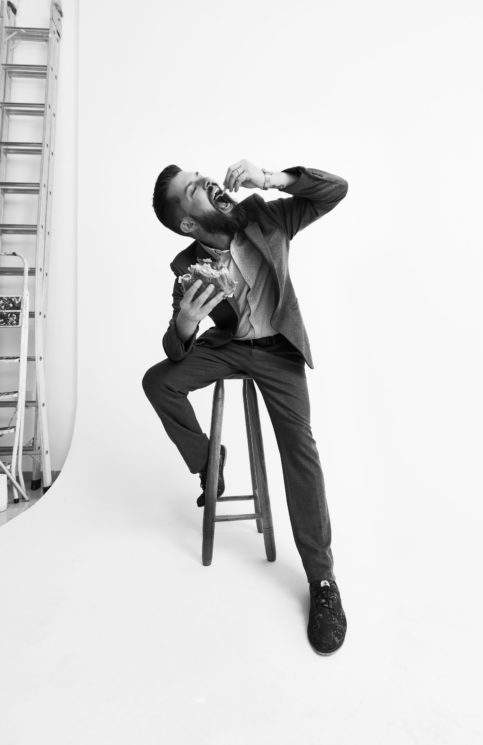 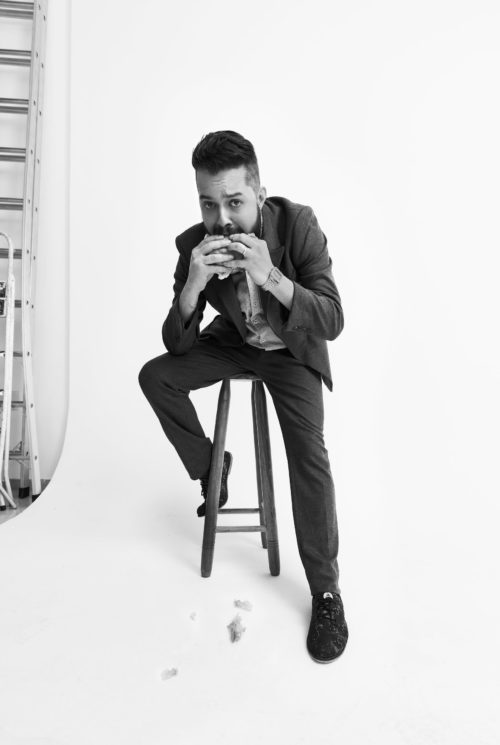 The fun thing about working with props, as simples as it may seem, is that it helps in telling a story in a singular way, and can be useful for the subject getting more comfortable at the photoshoot. Sometimes not everything may work the way it was intended, but this shouldn’t deter a photographer from trying things out. In this case, getting him in a suit in this situation was something I suggested beforehand and didn’t think he would accept. He accepted and it was all cool.

Photographing with wide-angle my be uncomfortable for the subject; it is certainly a little awkward the closeness that is required — especially if the model is shy and is not used having a portrait taken. But definitely every portrait photographer should consider at least experimenting with it, it can be an invaluable solution on certain occasions. Although wide-angle lenses must be used very carefully, and the photographer must be very conscious how to get the best of it, I will definitely look for future opportunities of using it in my works.

Bruno Fujii is a full-time photographer and visual storyteller based in São Paulo/Brazil. He is focused on portrait, documental, editorial and commercial photography. You can find out more about Brune on his website, and follow his work on Instagram. This article was also published here and shared with permission.

Can you shoot effective portraits with a wide-angle lens? Well, yes, you can