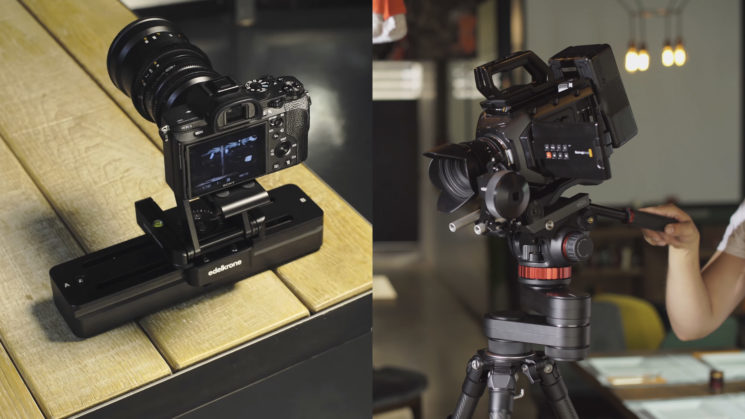 Edelkrone’s SliderONE, whilst small, is still quite mighty. The SliderONE was introduced back in 2015, and it’s proven to be popular with those who own one. Last year, they added motors and motion control. Now the whole thing’s been updated with a slightly longer SliderONE Pro. But it’s also received some pretty cool app updates, too, offering some great motion control options to let bend time to your will.

The Edeklrone Wing also sees a second generation update, along with a new Wing PRO. While not a slider, it offers slider-like motion, allowing for a lot of movement in something that takes up very little space. This, too, has seen an update, offering higher load capacity, as well as more stabilised movements.

On the surface, the SliderONE Pro just seems like a bit longer version of the regular SliderONE, but size isn’t the only change. The Motion Module is now built in, it has a more powerful coreless DC motor for better position control. It can also handle much steeper inclines, with a thinner body weighing 150g lighter than its predecessor.

But the really big deal with this is the improved app. It offers some fantastic features for adjusting either or both the timelapse interval and camera movement speed during the shot. A very cool idea, and one I’ve not seen before outside of custom built Arduino based solutions.

Also updated is the Wing, which sees a new SteadyMOVE tension system to help smooth out the motion of the camera as you push it. This second generation also increases the load capacity up to 16lbs (7.2kg). But if that kind of load capacity isn’t enough for you, the new Wing PRO can handle camera rigs weighing up to 48lbs (21.7kg). Which is pretty ridiculous.

The SteadyMOVE system is particularly useful. This helps to keep your movement slow and steady while pushing the camera manually. It also helps to smooth out the effects of gravity if you mount the Wing at an incline.

The SliderONE PRO, 2nd generation Wing and Wing PRO are available to buy now over on the Edelkrone website. I expect they’ll show up in all the usual other places soon.

Some cool updates to both products, but still not quite enough to make me rush out and buy. They’re still pretty pricey for what they offer.

« What background should you use with coloured gels? Grey or white?
10 contenders go head-to-head to see which software is the best for processing astrophotography »