Allure Fitness is local ladies only gym, but with fitness classes such as Zumba, yoga, suspension yoga, pilates and of course pole dancing for fitness – this isn’t your mom’s aerobics studio (well, actually it could be since they have members of all ages, shapes and sizes).

My wife has been a member there for a while, and she had noticed that the quality of imagery that Allure has been using on their website and promotional material didn’t really match the cool, sexy, modern brand image that the fitness studio is all about – so she managed to talk the owner into some new promotional photography. 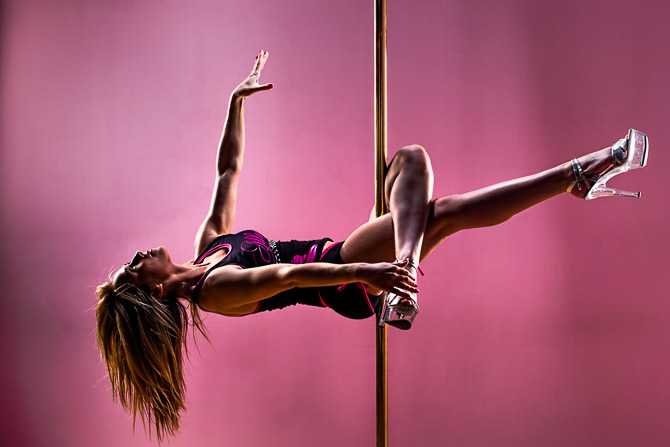 Read on to find out how we used dramatic lighting to photograph the Allure pole dancing fitness instructors.

Before we dive in, I should point out that this was my wife’s gig – she took all of the photos in this post.  I was just brought in to help with the lighting.

(She arranged to trade photos for pole dancing lessons, which is what I call a win all around.)

And by the way, if you’re used to working as the prime photographer, working as an assistant is a lot different!

(Especially if you are having gear issues, and every photography session has gear issues…)

Although my wife and I work together on photography gigs quite often (and we are often told that we sound like an old cantankerous married couple, which of course we are), I think we could both use a read of Jeff’s “How to Be A Great Photo Assistant” and “Assistant’s Expectations From Photographers“. 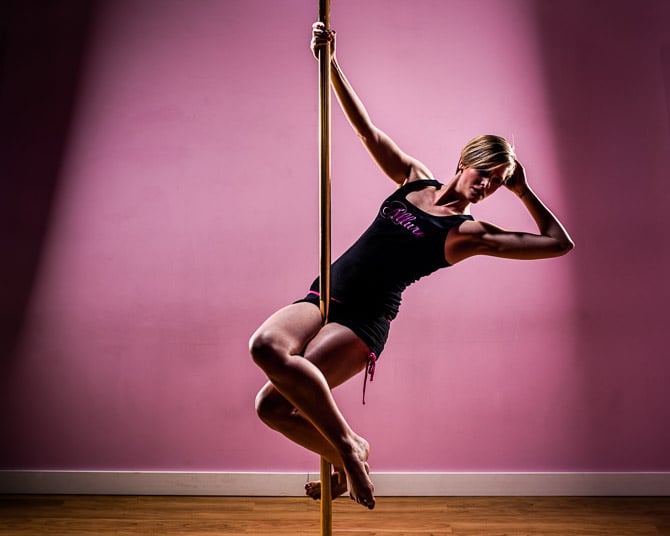 Speaking of lighting, this was actually a pretty tricky space to light.

First of all, based on their experiences with previous photographers, the fitness instructor’s were concerned that while pole dancing may look very sexy and glamorous, the faces they make while doing it are not (it is actually extremely strenuous).

That consideration led us to a back lighting / rim lighting setup that would leave our models mostly silhouetted, hiding a lot of those ugly facial expressions.

We did take precautions to limit the amount of spill from our lights, but in the future I would make sure I had everything gridded for even more control.

And, even though the fitness studio was a fairly large room, there were a ton of poles, suspension yoga straps and other obstructions everywhere – and a fairly low ceiling which all led to a very tight shooting area.

Finally, we decided to use the pink studio wall as the backdrop.  In hindsight, a beat up dance studio wall was not the best choice for a background, the paint is not as uniform in the photos as it looks in real life – which is also partially a problem with the amount of light spill from our lighting setup.  However, instead of worrying about the background lighting too much, we decided to use the light spill shadows to create a kind of spotlight look. 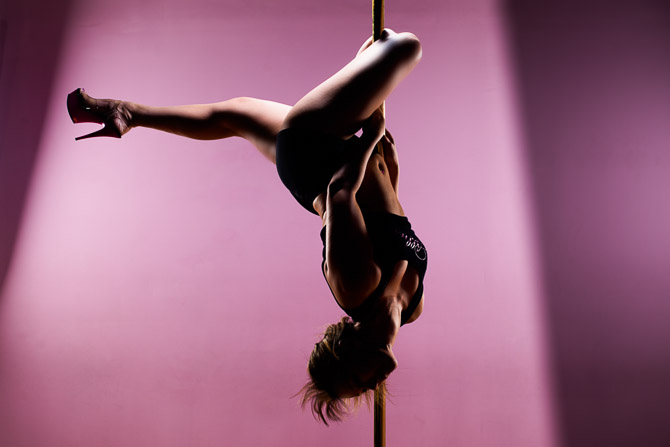 Here is a sketch of the lighting setup that we used for the majority of the photos: 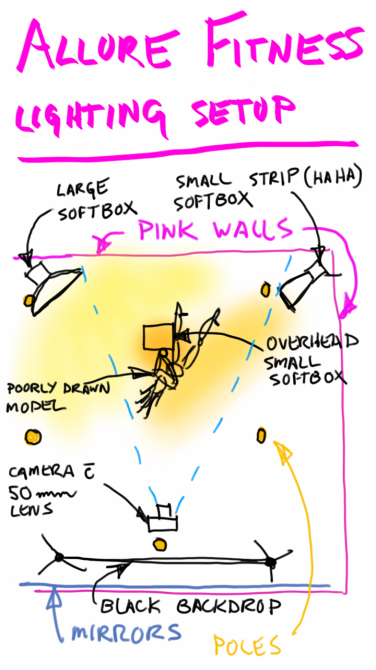 We set up a large black backdrop behind the camera to try and block some of the mirrors directly across from our lighting setup.

We didn’t want the photos to be a true silhouette – we still wanted to see detail and there was enough light spill bouncing around the room that we didn’t need to use a front fill light or reflector.

Here are a few behind the scenes photos of the setup: 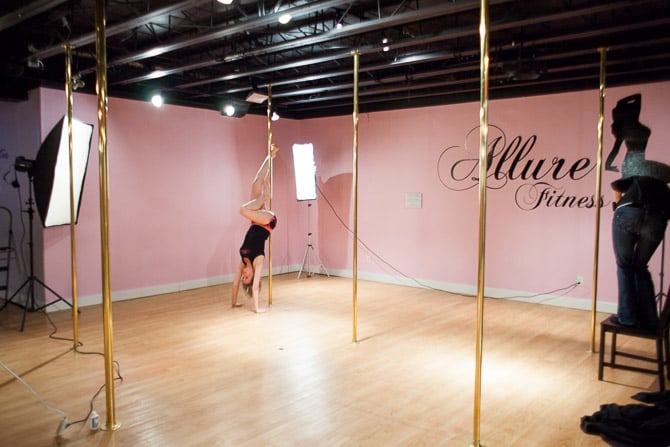 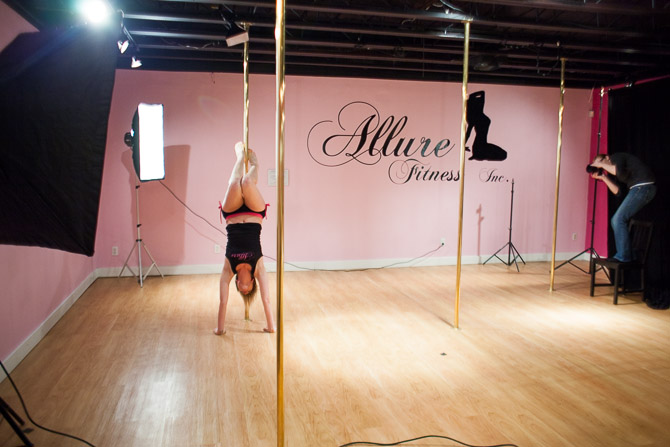 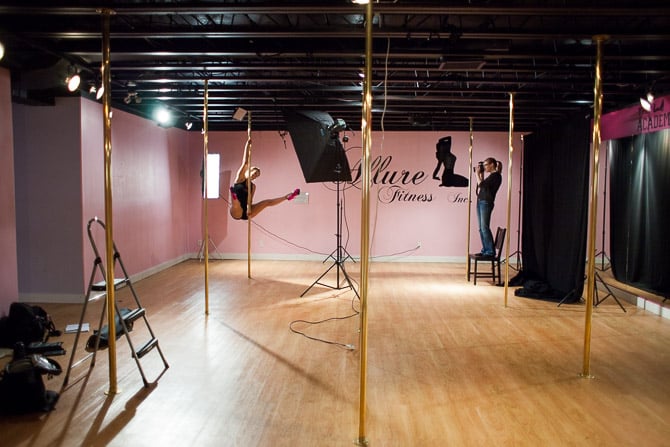 With each fitness instructor we did a series of photos with our main dramatic lighting setup, but we also changed things up to a more traditional pretty lighting setup.

To do this we simply moved the large softbox from behind the model to in front of the model while also raising the height of the light and angling it down.  You can see this lighting configuration in the third behind the scenes photo above.

This is what the resulting photos look like with this lighting change. 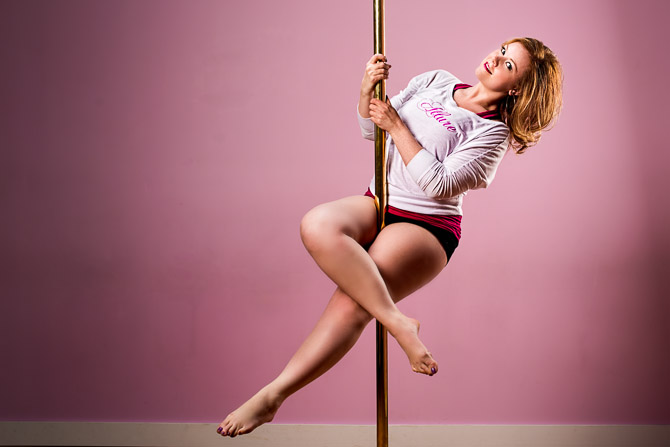 I would say that the final images have a medium level of post production editing applied.

In Lightroom I applied our usual basic edits: lens profile correction, white balance, contrast, black level and shadow adjustments.  Then in Photoshop I touched up any blemishes and did some minor skin smoothing using gaussian blur and a layer mask.  I also applied Topaz Detail with a layer mask to just the models and liquify tweaks where necessary.

Back in Lightroom, I applied a few final gradients along with color adjustments and clarity to bring out just a little more pop – and that’s it.

Here is an example of a before and after image: 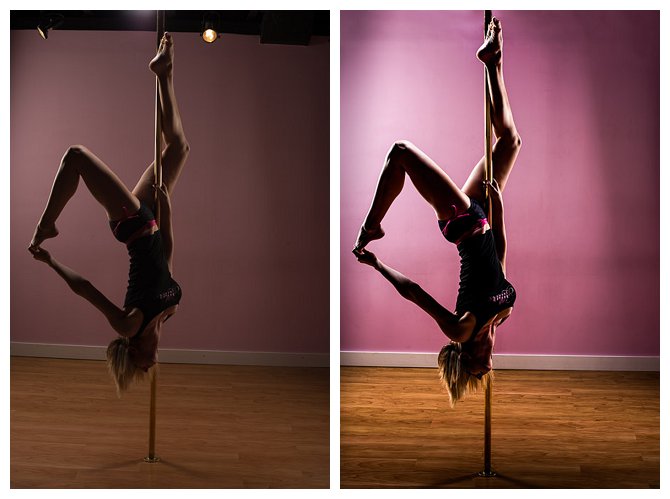 What I Would Improve Next Time

The biggest problem I had was controlling the light in a dance studio with a light colored floor and mirrors everywhere.  The next time I find myself photographing pole dancing fitness instructors, I think I will put up a black curtain all the way around the shoot location to block all spill and use just strip lights (as in strip softboxes) with grids.

And speaking of strip lights, I think it would be fun to use some gels, maybe a smoke machine… to add a little more authenticity to the finished photographs.