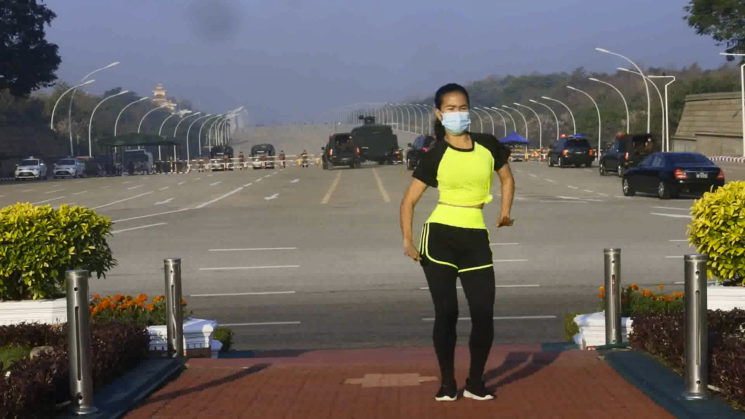 Well, the 2020s certainly is turning out to be the most surreal decade ever, and we’re only just starting the second year. I’m not even going to get started on 2020, but in 2021 we’ve seen second, third and four waves of coronavirus, an attempted insurrection and a change of administration in the USA and now an actual coup in Myanmar.

For fitness instructor Khing Hnin Wai, though, it was just another day at the office as she films her workout routine. Except this time, there’s a military coup going on around her. While she’s dancing and exercising away to some pretty upbeat music, the military drives past and behind her to take over Myanmar’s parliament complex in the capital, Nay Pyi Taw.

Khing Hnin Wai regularly films her aerobics videos on the empty roads of #Myanmar's capital #Naypyidaw. This week, her backdrop was a military coup.

There has been some scepticism that the video is real, although Khing has confirmed to the BBC that it is real, that this has become her favourite dance location for the past 11 months, filming there regularly, as evidenced by her various Facebook posts. If it’s fake, she knew this was coming and has been playing the long con and faking such videos for months. The more likely explanation, however, is that the video is genuine.

Yup, this is definitely going to go down as one of the most surreal videos of the decade. I’m just curious how the next almost-9-years is going to top the crazy insanity that’s happened so far over the last 13 months.

Oh, yeah, and if you’re ever out vlogging or filming yourself doing something, it might be worth turning your head occasionally and watching what’s going on around you.