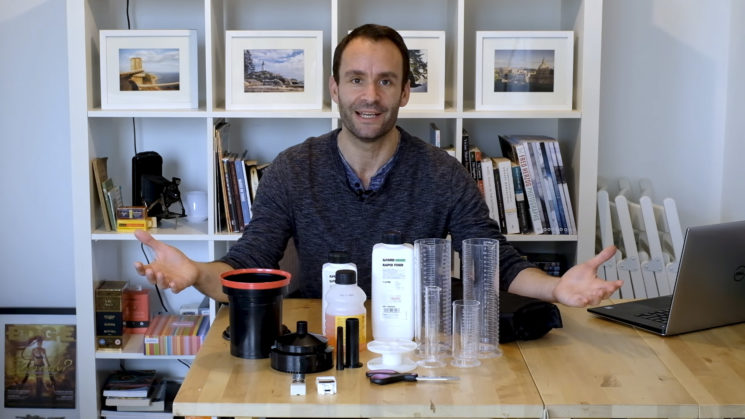 As popular as film has become, a lot of people still mention the cost of shooting film being quite high. And we’re not talking about the price of gear, because that’s dirt cheap these days. It’s the actual shooting process that can be expensive. As the rolls are made in fewer quantities, manufacturing is more expensive. Because labs are developing fewer films, their costs go up, too.

The biggest way to help knock down this cost, though, is to develop your own film. In this 36 minute video from photographer James Stevenson, we see the complete process from start to finish. James covers the kit, chemicals, accessories and entire the process from start to finish. James covers a whole lot of information, with some great tips. And best of all, you don’t even need a darkroom to do it.

As it is quite a long video, here’s a quick breakdown of the different parts.

Since I started shooting film again about 6 years ago, I’ve been developing my own rolls, too. There’s a little experimentation in the early days, but it’s very easy to learn how to do. The basic process, as James outlines is pretty straightforward.

The kit you need is also relatively straightforward. At the bare minimum, this is what you’ll need

While it is a straightforward process, learning to do it properly will take some experimentation and practise. The biggest challenge of those being loading your film into the tank in the blind environment of a changing bag. Try it out in the open a few times, first. Just buy a couple of cheap rolls of film to practise loading with.

Once you can do it out in the open without looking, try it inside the bag until you can do it every time without having to think about it. Then you can start trying it with real film.

The next experimentation step is the actual developing. There are so many different chemicals and films out there now that the combination you’re attempting to use may not even be labelled on the packaging. If you’re having trouble figuring out what temperatures and timings you need, have a look at The Massive Dev Chart.

Yes, 36 minutes is a long video, but it’s well worth a watch if you’ve been thinking about giving it a go yourself. It goes into depth on the whole process and shows just how easy it really is.

For me, developing my own film was the only real choice. Learning how to do it myself cust my developing price down to about 5% of what it was when I was using high street places.