Model Jen Brook have been sharing her art with the photography community for a while now. However, after seeing recent trollish remarks about females in the industry she felt the need to hit back. Here is her open letter response..

How dare you. Yes you, I see you even though you hide behind your keyboard like the faceless coward that you are. I hear every word you say and yes, they bother me…even when they are not meant for me, because just like you, I am a real person behind this avatar.

You come up from nowhere like a nasty rash, spouting bestial crap about how women are only ever successful based on their shapely figures, luscious locks or pretty little faces…attracting attention purely because of the way they look and not once because of the hard efforts they have endured. 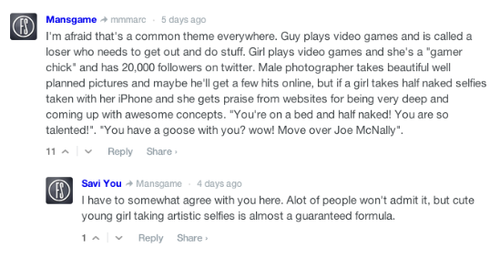 I am well aware that this is a mans world, but as James B suggests…it would be nothing without a woman or a girl. In an industry so razor sharp on talent and creativity, why is it refreshing to see a female photographer celebrated for her talents and not patronised or even objectified for having a vagina? Why is it not the norm? Why is it that the person is not judged but saluted, based on the merits of their achievements and obvious skill, rather than their gender?

Hey troll, what is it that you see that threatens you so?

If I have to defend my gender one more time to a small minded community of crass, demeaning, idiotic bunch of misogynistic twerps, I think my modern day head might just explode. When you’ve dragged your butts back into the twenty first century and have conjured valid points as to why a genuinely talented and hardworking lady in any industry does not have the right to stand in the league of a fellow talented gentleman – then perhaps then….just then, might I take note of your trolling. 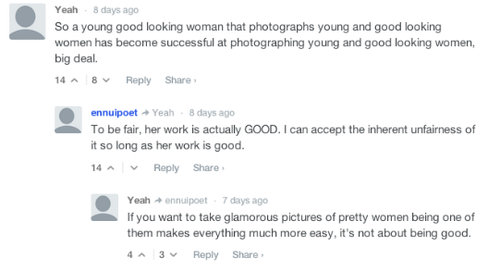 I’m so glad that I know much stronger men in my life who share the roles of adulthood with equal respect for their partners, their friends, their family and colleagues. The food chain is based on wealth, hierarchy, class and ability – this we will cruelly never change. But never ever should it be age, race, nationality, sexuality or gender. We as a nation, are much better than that now….aren’t we?

It’s worth reminding you also, that in any other institute you would be sued for such remarks. Just imagine what the press would have to say if in the House of Lords a male MP told a female MP she was only there because she was ‘a hot piece of ass’. They would be ripped to shreds and likely fired on the spot, cast out for their stupidity. So I do wonder darling, when you grunt your animalistic noises of non-truths, what it is that makes you believe it is acceptable here online…

Women have run this country, women have diagnosed your illnesses, women have fought on the front line for your freedom, women have taught some of the masters of all arts, sciences and crafts…and guess what, women are so much stronger than you think. 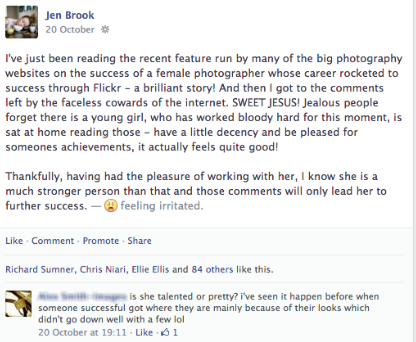 I look forward to your attempt at a predictable retaliation, no doubt disregarding me as a bra burning, lesbian feminist – which in itself is degrading to the gay community so don’t even go there – but you won’t hear another peep from me on this topic. I hope I’ve made my point and my further silence is my act of power, my act of choice and my decision to let you fester on your own prehistoric thoughts for tonight.

Also when you do, please note that this is not an attack on men; as many good men say much wiser things than I can articulate on the subject and are quite frankly ashamed of your representative actions. This is a defence against misogynists and your out dated sexist behaviour regardless of their gender.

Shame on you to think that a woman can only be successful for her looks. Have some respect for the people who are your equal. I might be a woman, but I am a person first. Shame on you.

Jen Brook is a creative fine art, conceptual and fashion model based in Preston, England. You can follow her Facebook here and her Twitter here. She writes in the same style over at Tumblr, so make sure you give it a visit. This article originally appeared here.

P.S. Jen have also wrote some inpiring letters to photographers and her fellow models.