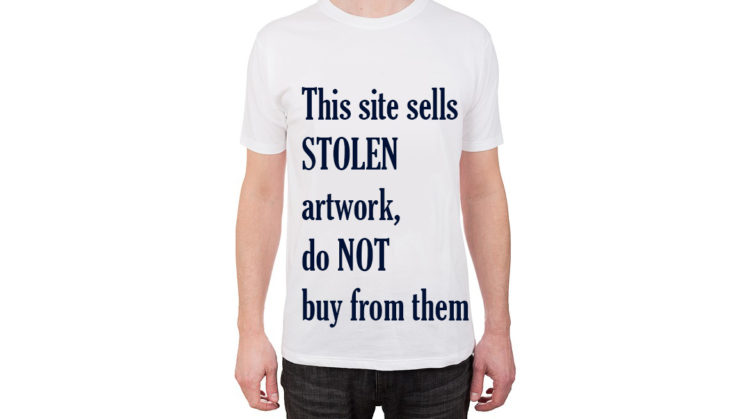 If you’re a photographer, it’s very likely that your images will get stolen, and even used on different kinds of products. Twitter user Hannah Douken recently discovered that “art bots” scan Twitter in search of artwork that will be put on T-shirts and sold without the artist’s permission. So, she decided to troll them and turn their own tactics against them in a hilarious and ingenious way.

Hannah posted a tweet reading “hey can y’all do me a favor and quote tweet/reply to this with something along the lines of ‘I want this on a shirt’, thank you.” She attached a photo of handwritten text reading “This site sells STOLEN artwork, do NOT buy from them!” She added that she wanted to see if the bots pick it up and turn it into a shirt. And that was exactly what happened.

hey can y'all do me a favor and quote tweet/reply to this with something along the lines of 'I want this on a shirt', thank you pic.twitter.com/UhuGRQgU6b

She found the “stolen artwork” T-shirt on Red Bubble shortly after she posted the tweet.

okay fine I caved, I am a horrible person with very little moneyhttps://t.co/N1cKrgoIJe pic.twitter.com/RPaV6xVsKr

And as people kept replying to her tweet, there were more and more results.

OMG I love this drawing!! 😍I need this on a shirt !! pic.twitter.com/WHabfCYv6L

And then, Twitter user Felix Avenier had another idea. He suggested that people started posting trademarked stuff like Disney images, let the bots pick them up, and then alert Disney.

Honestly people should start posting trademarked stuff like disney images and tripping the thing that generates shirts. Then alert Disney. Shut these sites down with lawsuits once disney catches on a third party is hijacking their stuff automatically.

Say no more, Felix. Other Twitter users decided to test it and posted this weird drawing of Mickey Mouse along with the text:

hey guys! please tell me if you'd like to see this design on a tshirt :) pic.twitter.com/633t4bojmb

Oooh man, the website deleted the shirt (I wonder why…)

But I really REALLY love this artwork as shirt, wouldn't it be amazing if we can buy this as a shirt or mug? 🥰 pic.twitter.com/GAmheljoT8

I don’t know if anyone has notified Disney, but yes, these also became available on T-shirts:

While I find this trolling hilarious and I had fun seeing all the ideas people came up with, let’s get serious for a moment. I think that this is actually quite concerning. According to last year’s report from Copytrack, over 2.5 billion photos are stolen every day, and I’m sure there’s a lot more. It’s also concerning how many websites offer these T-shirts with stolen art.

Thefts like this affect all kinds of artists: photographers, painters, digital artists, and designers. It devalues their work, potentially reduces their income, and I think it’s not even easy to keep track of your photos or artwork that gets stolen this way. So, I sure hope that artists will find ways to put an end to this. And this trolling could be, if nothing else, the first step towards it.

This T-shirt is an “auto translator” for traveling photographers

« Data recovery service shows what the inside of a dead Sony XQD memory card looks like
You should practice photography every single day… or should you? »