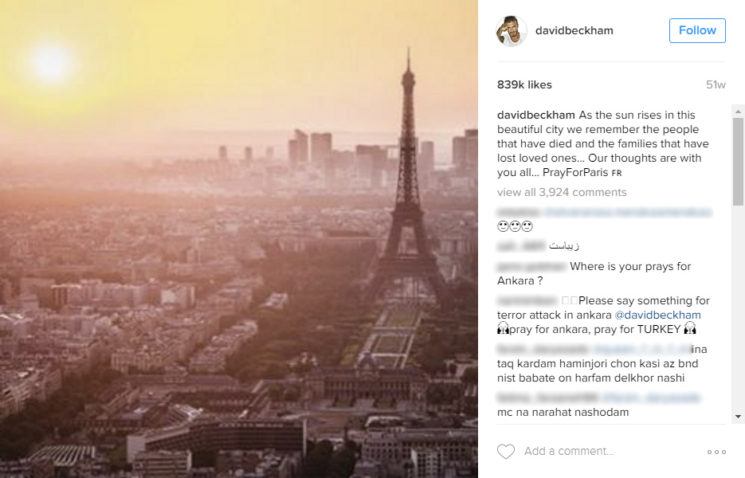 In about one week will mark the anniversary of the most traumatic and violent piece of history in France in the last decades. The 13th of november 2015, several coordinated terrorist attacks took place in Paris, less than a year after the attacks against the newspaper Charlie Hebdo.

Still today, Paris feels different. Much like the 9/11 attacks, Paris now has this air of danger, still lingering, and the attacks are clearly in the heads of every Parisian.

The news of the attacks spread very quickly, and soon, artists and other celebrities began to express themselves on the topic. The first of them was David Beckham, on instagram and Facebook, with this picture:

Now, saying to pray for Paris is already a clear sign of the lack of understanding of the very secular culture of France, where we pretty much share the views of Anthony Jeselnik on the topic: it doesn’t help much.

The truth is, David Beckham is not just a football player anymore, he’s a celebrity, he’s a brand. And as such, the value of his brand goes up with publicity. And to me, this was exactly what happened. Also, the sun is not rising on that picture, as every Parisian new: the picture very clearly shows the west side of Paris, and therefore the sun is setting.

And then, another thing struck me: the picture he was using was mine. He didn’t contact me, he didn’t ask if he could use it, and he actually cropped it, along with the copyright notice. Being the first one to react to the events, his words and my picture got published in several international newspapers: the dailymail, the mirror, several French magazines as well. They all published the picture, cropped, without any credit whatsoever.

This actually happened to me before, although not to that scale. What I usually do is I contact whoever is infringing copyright, ask for credit, and in the case of commercial use, payment. People don’t always comply (or reply, for that matter), but some people do.

The day after the attacks, I was still hesitating on what to do: someone using a picture without my permission was absolutely NOTHING compared to what just happened. And yet, were it any other day, if someone used my picture for their gain, I would at least have asked for credit. So in the end, that’s what I did: I left a comment (turns out you can’t send him a PM) asking for credit, which of course never happened. I never even had an answer.

I felt disgusted. The credit, the infringement didn’t matter. But someone using my picture, and terrorist attacks, for their publicity? And it worked, when you looked at the millions of likes, shares, and articles. I felt helpless, and in the end, let it go. In the scheme of things, it didn’t mean much. 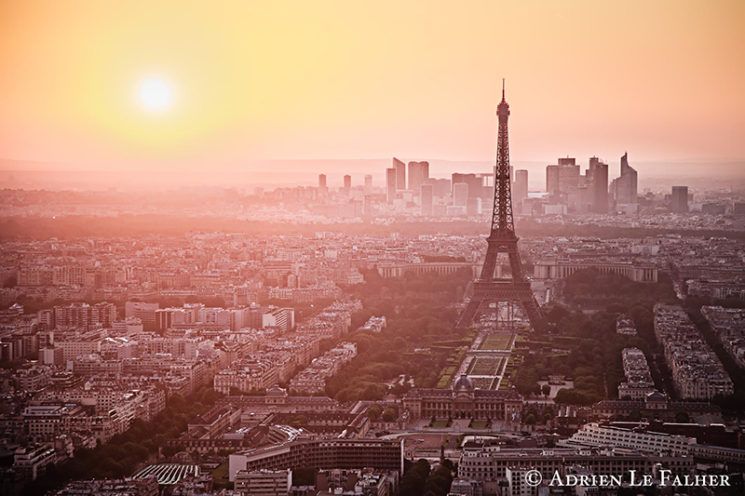 Dealing with art theft is usually pretty straightforward: thieves are wrong, you try to contact them and work with them for some kind of compensation. But this wasn’t a regular day, and this wasn’t regular infringement. And despite me not liking the message, you could say it was for “a good cause”. How do you deal with this? Is it the same thing as when Madonna used pictures with the artist’s authorization?

Still today, the question itches. What would you have done? Do you think it was wrong of me to stand for my rights?

Adrien le Falher is a photographer, director, cinematographer and colorist. Born in Paris, he now travels the world, always seeking new adventures. You can find out more about Adrien on his website, follow his work on Instagram and Facebook, or reach out to him through Twitter. This article was also published here, and shared with permission.

Is It Ethical To Sue Over Copyright Infringement?