Eeeeveryboy loves Bullet Time. Bullet Time is that magical moment in a movie when everything freezes and the camera makes a circle or a semi circle around an object. I guess it is called bullet time cuz the camera moves at the speed of a bullet.

By now, you probably know that this effect is achieved with a battery of stills camera that will set you back a small house. To achieve Bullet Time, the photographers (or Bullet time specialist) places cameras in a circle and use both a green screen and clever triggering software.

The big number of cameras are used to maintain smooth motion as the point of view moves from one camera to another.

The Triggering mechanism is used to trigger the camera one after the other in very close succession, so it would seem like time is still flowing while the POV changes.

And the green screens is used to eliminate any interference and gain control over the set.

Or….. You could crowd source it all.

Photographer Guy Viner really wanted to make a Bullet Time sequence but lacked the 24+ DSLRs that would be needed to pull of this stunt. (He also lacked the 60 feet of green screen and the software), Instead he called some friends. Before we go into the details, here is what they pulled off.

Kicking Off The Project

The first hurdle was getting the 20+ cameras that this project would require. So a few months back Guy put a call on his blog and 24 photographers showed up to a local photography club meeting.

The initial results which you can see in the video above were promising, so a second date was set, and this time it was during a photography convention which promised a bigger scale production. The movies below are from the earlier attempt and a bigger, better movie is on the way.

While the hardest part of getting a few dozen photographers (and cameras) involved was successful accomplished, the crowdsourcing part of the project yielded a few technical issues that needed to be addressed.

What, didn’t you all showed up with a 60D and a 50mm 1.8? Well, no. within the 43 photographers there was a huge range of cameras, tripods and lenses. This meant, different base ISOs, different focal lenses and distortions, different maximal and minimal tripod length, different color hues – well, you get the point. (click the image to see a bigger version of the mess) 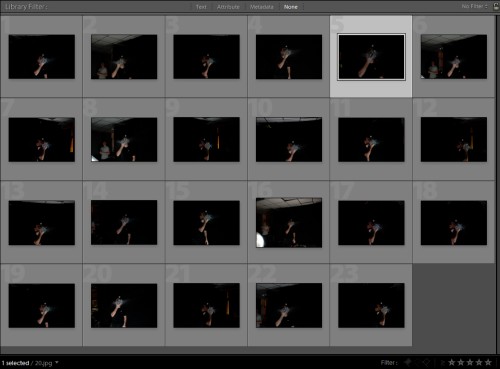 The first thing to do was get everyone into position. A white ping-pong ball was hanged where the action would take place and a rope was used to create a circle. Tripods were carefully set at the edges of the circle from low to high, creating an arch. The ball was then used both for focusing and calibration. 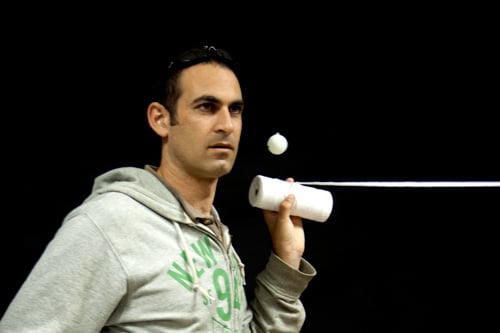 To overcome the messy camera situation, a few settings were set and a ping pong ball was shot. To get everyone on the same line, all ISO, white balance, and aperture were manually set. Focal length was set at 55mm since it seemed to be common enough.

A shot of a white ping pong ball carefully placed at where the subject would be. The nice thing about ping pong balls is that they look the same from every angle, so it can be used to calibrate the cropping and align the images of the action sequence photographs. (simply place ball over ball, I know it sounds bad, but, really, this is how it works). 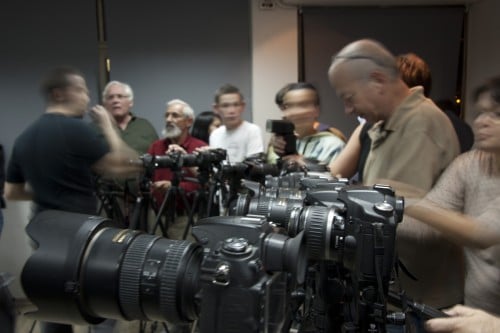 It’s hard to sync 43 cameras. Dedicated software like DSLR Remote Pro Multi-Camera can trigger tens of cameras in sync, yet we were dealing with a low-cost setup. This is why we opted to not precisely synchronize the cameras. A long exposure of 5 seconds was used on all cameras (good enough so everyone can open shutters) and 2 SB900 strobes will provide a lighting quick exposure.

Since the only light will be coming from the strobes there is no risk at having the shutters open in slightly different timing.

But, how will the strobes know when to fire? A cameraAxe with a sound trigger was used to pick up the sound of the popping balloon and trigger the strobes. 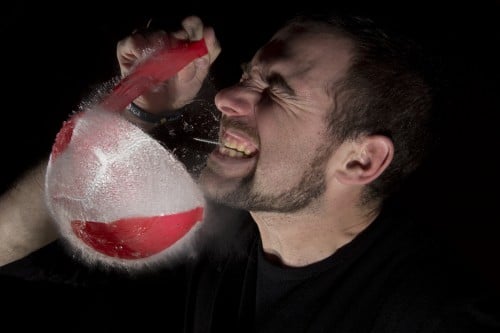 As I mentioned before we had no green screen to control the environment, so two measures were taken to assure control.

We had everything done in complete darkness so the background would be black. The only light came from a small flashlight signaling the photographers to open shutters, and once all clicks were heard, the actors know they had about 3 more seconds to pop the balloon.

The second measure was to point the cameras slightly upwards. This ensured that camera will not pick up the photographer on the other side. This kind of cross fire avoidance will not hold for a shooting range, but definitely works for a Matrix style bullet time.

And if all that was not enough, the nice guys over at Rotary View made a 3D controllable slider for it:

I know lots of you guys don’t own 20 camera (even Joe McNally travels with dozens of strobes, but probably not more than a few bodies). If you are a part of a photography club or a group, this is just the kind of project that you could put up in one afternoon or a rainy day. Please share your results if you do anything like this.