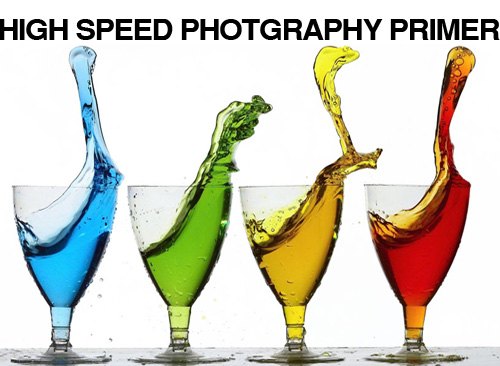 On our last post we built and used a sound trigger to shoot a crossbow shoots an egg, today we add a photo gate trigger and shoot things falling.

After using the original trigger circuits for quite a while, I decided to make some improvements and to amalgamate the various devices into one, and to finally “hard wire” the whole lot. My excuse was that while I was incorporating the improvements I could rationalize the kit, but to be honest this was a bit of a vanity project. The finished control box is better, and much more versatile, and has enough knobs and switches to impress the unwary, but functionally the quick-and-easy separate circuits are just as good!

So, you can treat this post as a bit of a vanity project too, and skip it completely unless you are a inveterate tinkerer yourself!

1. Add a “range” switch to the delay circuit: it is now adjustable over three ranges :

Note: the range is set by the value of a particular capacitor, so I just added a three-way switch to “switch in” one of the three at a time.

3. Add a “gate-ready” lamp for the photo-gate (infra-red beam) triggers – much more useful than I expected – see the “Whoosh” we did on the next post.

4. Add a transistor/transistor switch in addition to the Schmitt trigger, for a faster response. No significant/practical difference noticed so far! Good for balloons?

5. Add a cross-beam photogate, for insects etc. Still working on a robust mount for that. Soon….

8. add a couple of generic inputs (for any make/break switches)

Items 3, 6 and 7 were improvements I noticed in the HiViz designs when I revisited their web site. I added a range switch to my original delay board too. VERY useful.

After making the “megabox” I note that Hiviz now sell a “multi-trigger” setup too! Well, I did mine first, so there!

Here is the finished stripboard, all soldered up. Not the neatest construction ever made, I know, but it works just fine! The second image shows all the external sockets and potentiometers attached and ready to be squashed (…sorry, I mean carefully placed!) into the plastic project box. (as always, the circuit diagrams can be found on Hiviz)

From the left, the sections are: Transistor photogate, the Light-Activated Trigger circuit, the Schmitt-trigger photogate, and finally (the right-hand half) the delay unit 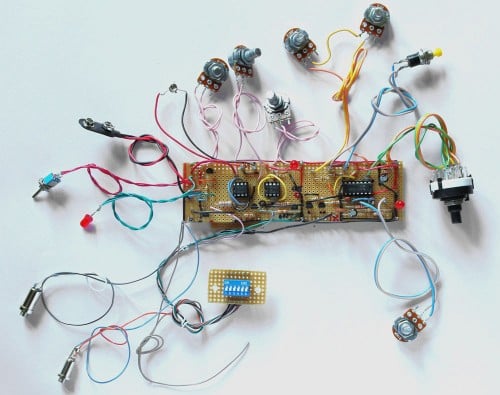 This “final” design allows each of the 6 inputs to be individually isolated if need be (eg when the sensor isn’t plugged in) and allows the photo-gates to be sent to either the transistor/transistor OR the Schmitt-trigger circuitry. Three generic inputs (direct to the delay circuit) take the output from external units such as the sound-trigger box, the motion/vibration detector or even a simple push switch.

To make the labels, I just scanned the box after I made all the holes! Then I could place the writing (white on black) accurately onto the scan. I printed out the sheet and stuck it onto the box with Pritt Stick. Other glues are available… If you do something like this, remember to leave room for the size of the control knob when you place the label text. D’oh. 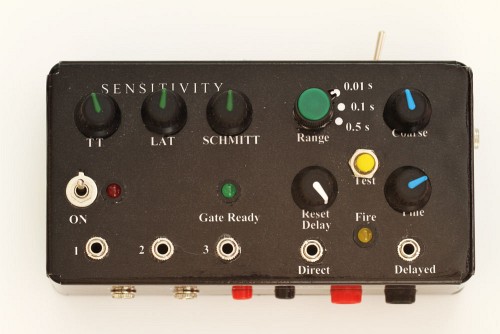 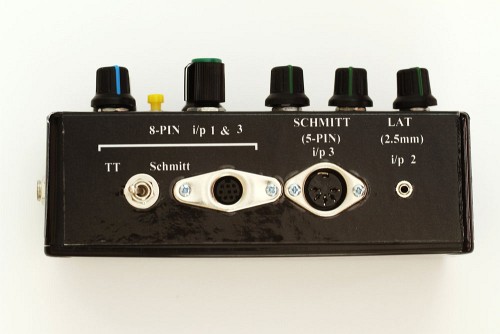 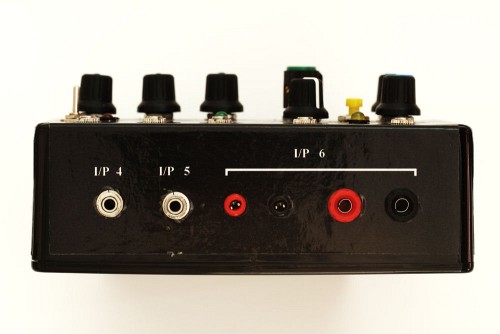 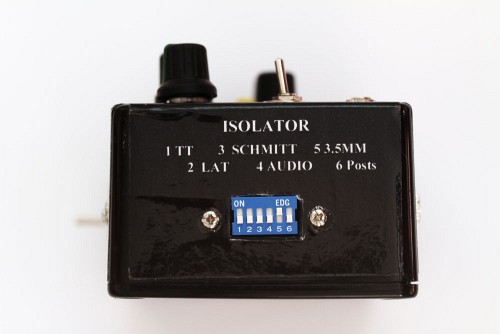 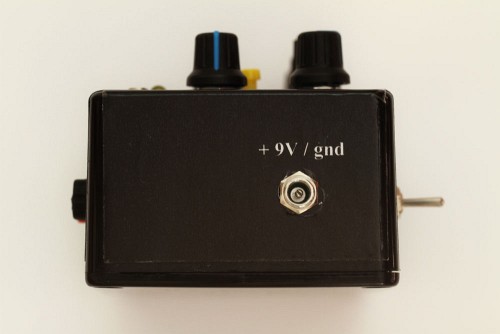 There are outputs from each individual trigger circuit opposite its own sensitivity control, and two outputs from the delay circuit: one direct UN-delayed, and one after the delay has been applied. Just in case I need an undelayed feed… haven’t used it yet, though!

There is a 9v battery inside, but there is also a 9v input socket. Mind you, when the battery finally died during a shoot, I didn’t have the cable with me so I had to open it up and change the battery anyway. Still, it’s a good idea, honest!

A sensor such as photo-gate, a sound sensor, a light sensor and so on, is plugged into the appropriate socket. Different size/type of sockets for each.

The output from the box is fed to either a flash unit directly (eg hot-shoe adapter), or a wireless flash trigger transmitter, or a wireless shutter-release transmitter, or direct to the shutter release socket on the camera – refer to your camera manual for those connections. My Canon 7D has a three pin shutter release socket: short pins A and B to activate auto-focus (like a half-press on the shutter button) short pins A and C to fire the shutter – so the output from the box is connected to pins A and C. For direct connection to a camera, the usual recommendation is to use an isolator circuit (such as an opto-isolator) to protect the camera from any accidental voltage spikes etc.. my wireless setup obviates the need for that.

Activate the sensor (eg break the beam) and after a short preset delay, the flash fires. Job done.

Note that there is NOT a direct microphone or “piezo” input for this setup – my sound detector circuit was already soldered up and ready to go: the output from that is simply plugged into one of the “generic” inputs. These inputs are just make/break, and the sound (etc) trigger “output” effectively just shorts the two pins of the socket – ie “makes” the circuit – which is what is needed, remember, to fire a flash: if you connect the two “pins” on the hotshoe, the flash fires. If you can only see one “pin” on the hotshoe, the other one is in the side of it – where the foot slides into the socket normally. For flashes with multiple pins under the hot shoe, I mean the centre pin and that side-pin.

Now we are definitely ready to take some pictures….

The Cherry Drop and the Grape Shot

One of the first high speed photographs you can take once you have all the things in place is a drop shot. This is how I did it. 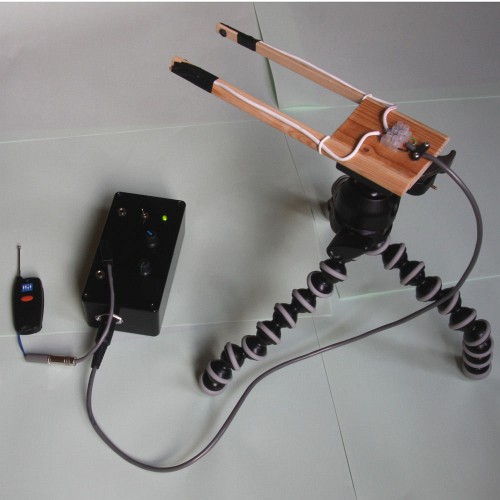 I arranged the photogate (the wooden “forked” structure in the image) about 30cm above the cream, and connected the output (of the delay circuit) to the camera shutter. I put the flash away from the camera (with a wireless flash trigger), but anyway you could put some reflectors above left and/or right of the drop zone. Reflectors? Sounds technical. I mean some pieces of white A4 card! A few test shots allowed me to set the exposure – using aperture and ISO, together with flash position, reflectors and so on, since the shutter speed is not part of the equation in these shots.

Then I removed the cream!

Dropped a cherry through the gate, and adjusted the delay so that the cherry JUST reached the height of the surface of the cream. This is a balancing act, providing enough delay so that you can use more height if you need a bigger splash :-)

These trials allow you to check the exposure too. When your shot has a cherry nicely exposed and frozen in mid air at just the right spot, put the cream back and get the shot. By tweaking the delay you will be able to capture the splash at various stages. My most popular image shows the cherry inside a crown of cream, clearly AFTER the initial splash, as it bounces back up. These three images show three separate drops, each with a slightly longer delay: 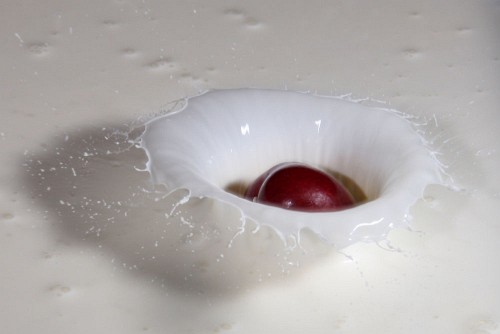 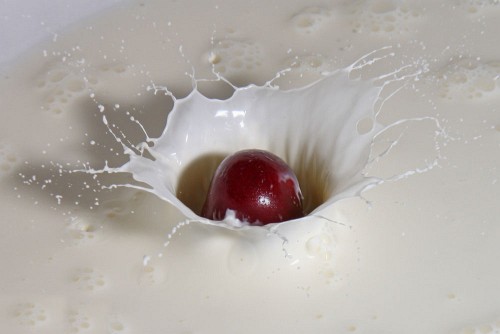 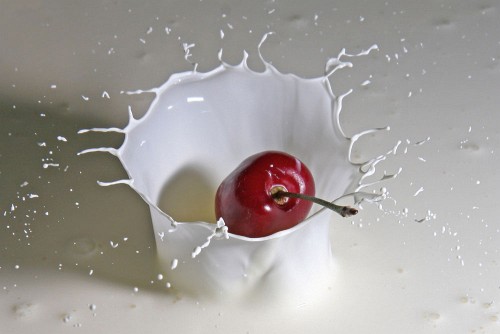 I use a very inexpensive wireless shutter release to activate my camera, which introduces a small but significant delay on its own, but that was small compared with the drop time from 30cm, so a tiny adjustment to the set delay compensated.

Next time… I will have a second bowl of cream for the final shot… so the bubbles resulting from the experiments aren’t in the finished product :-)

The following sequence from the grape-shot setup procedure shows the position of the grape as the flash delay is increased by small amounts…. note that again, each of these shots is a different “drop.” 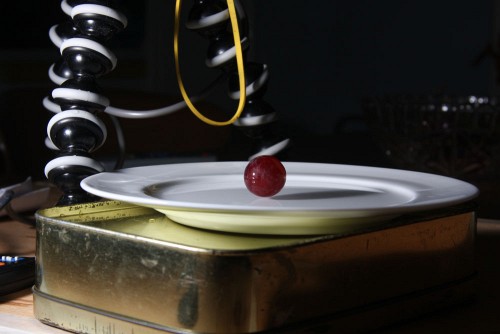 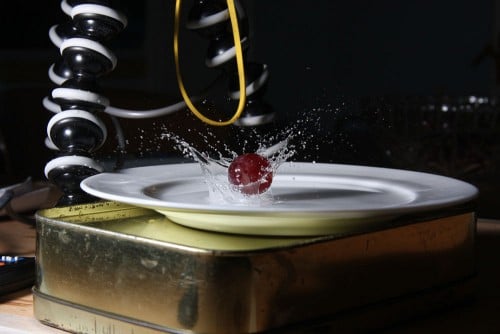 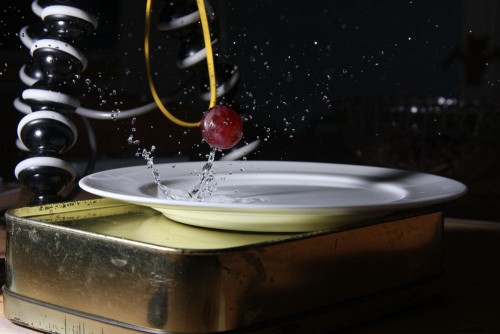 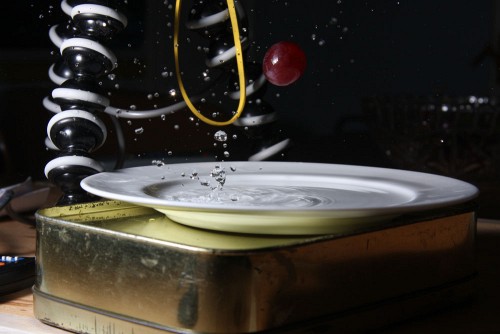 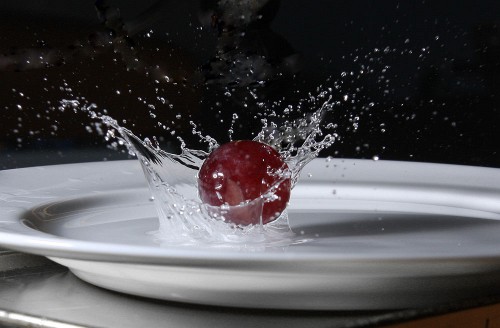 Next week, our concluding episode, the sliding table.