We have covered quite a bit of bullet time rigs but even the really high-end ones usually use an array of GoPros which are not the cheapest way to get a good bullet time shot but is it manageable.

A collaboration between Swiss TV station and Swiss Canon upped the game by making a bullet time rig with 50 Canon EOS 1DX DSLRs (yes that’s a 5 followed by a zero). A single one of those bodies is about $6,800 so it totals up to roughly $340,000. Oh yea, they needed lenses too. Weapon of choice was Canon’s top notch 24-70mm f/2.8L II USM. Those roughly cost $2,100 a lens. So we are looking at an additional $105,000 of lenses, bringing the total (with some memory cards, cables and 50 bubble levels) to just about half a million Dollar’s worth of gear.

The first sequences was taken indoors, and synching 50 cameras is hard enough 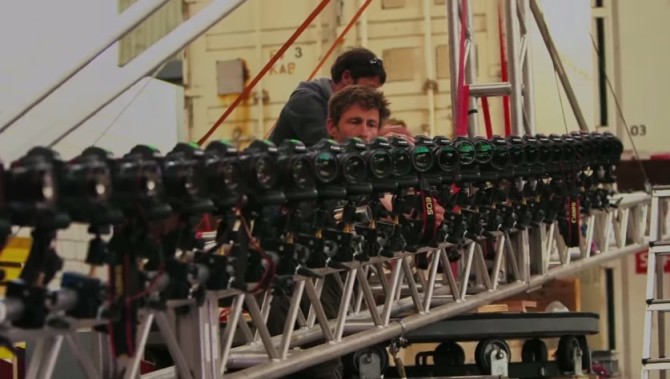 But for the second shot, the team got the cameras to hang over a river. 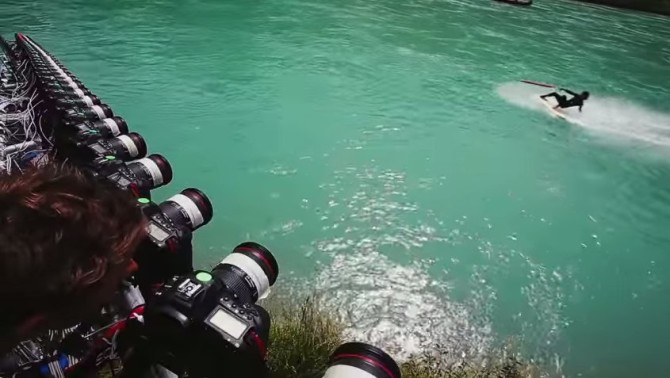 I am not really sure why such a massive amount of high end gear was used to produce the shot other than a tour de force, as similar results could be made with significantly less expensive gear (especially after slapping some ‘creative filters’ on the final bullet time sequence).

And it is quite a tour de force, even as a Nikon shooter my jaw dropped when watching the BTS clip.

Bullet Time Rig Made With a Ceiling Fan

« How To Shoot a Perfect Watch using only an iPad
What Makes A Great Photo? »