Mike Roshuk is a professional Photographic Artist, Illustrator, and Graphics Specialist based in Edmonton Alberta. He specializes in merging the worlds of photography and illustration, creating beautifully rendered artwork ranging from scenes of fantasy to pop-culture inspired images. I asked Mike to walk us through his mario world inspired composite

Whenever I’m trying to think of an idea for an image to create, I draw inspiration from aspects of pop culture that I have a strong connection with. This whole Pokemon Go craze these days has had me thinking about my favorite games from when I was growing up. Super Mario Brothers 1, 2, 3, and Super Mario World on the SNES were a huge part of my childhood. I thought it would be great to put a spin on some tribute pieces to these games.

Like with most of the images I create, I begin with a series of sketches. I took a look at a bunch of game screenshots for reference (although much of it was already burned into my subconscious anyway), and sketched out a few rough ideas based on the 3rd installment of the Mario series. Of course, I wanted to have a female version of Mario, and wanted to focus on creating some scenes with a lot of energy to them, rather than the typical pin-up style I’ve normally done in the past. 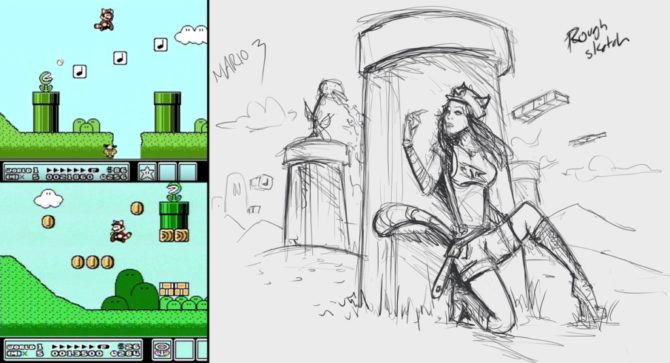 Just like in a Hollywood movie, casting is crucial. Before I even started sketching, I already knew the model I would use to bring this to life. I’ve worked with model Stephanie Patel numerous times in the past, so I already knew she would be the perfect fit for this theme. Once I finished the photoshoot with Stephanie, I roughly sketched an over-top the image of her to create the ‘mario look’, just to get an idea of the style and color scheme. At this point I was already excited to see how it was all going to come together. 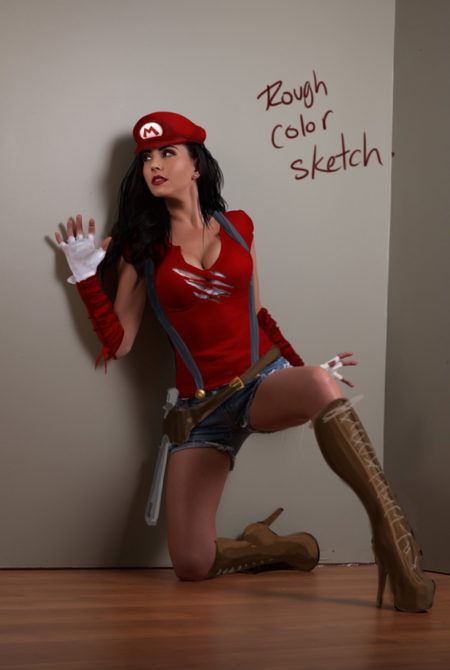 Once I had the image of ‘Mario’ roughed out, I overlaid it with my sketch, and added some quick colors. At this phase I’m usually just quickly throwing around colors just to get an idea of composition and general look and feel. One specific detail I wanted to do with this one which differs from all my previous images, is that I wanted to create the composition with a Dutch Angle to add a little extra energy. 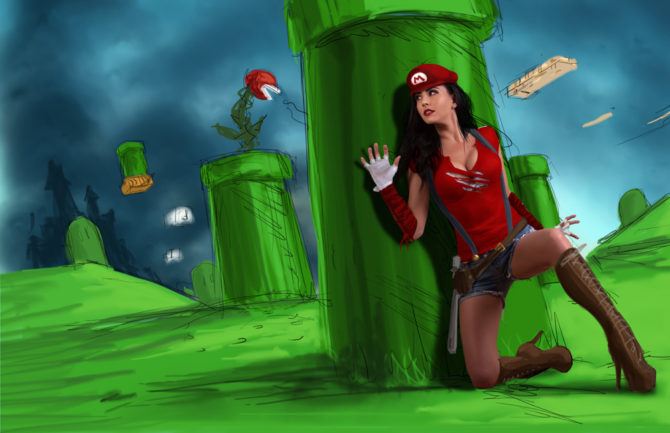 Now some notes on composition – Usually when I create an image I like to follow the visual layout of Past / Future / Positive / Negative. As shown in my example below, right side of the image represents the future and left side represents the past. Top is positive, bottom is negative.

So I experimented with flipping the image. I wanted her to be looking downward and to the right, giving the viewer a sense of foreboding, like you know something bad is going to happen on her way to the castle. 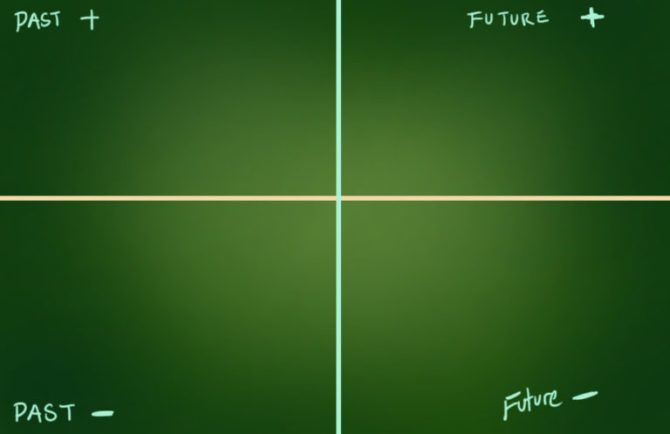 But ultimately I decided that it it didn’t create enough tension. Plus with the angle of the image, it gave the illusion of an easy downhill journey, so flipped this way doesn’t make the viewer feel that Mario is faced with any real sort of danger. 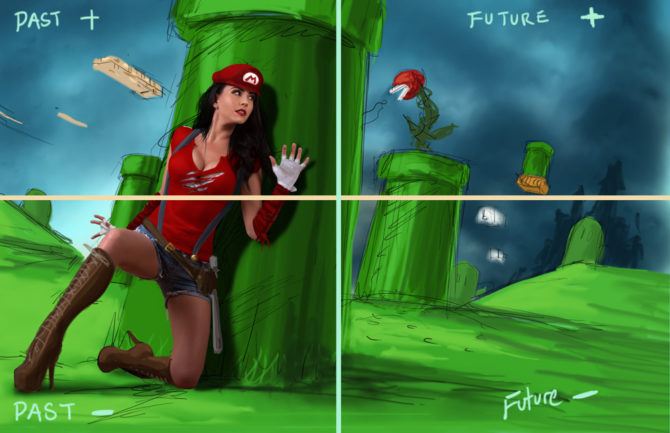 So, I flipped it back the way it was, shifted it to the left, and added a Piranha plant to her right that looks as if he is about to eat her. I felt this set-up gave it the tension it was lacking. Her objective is to go to the left (which feels more ‘difficult’ as it is against our natural method of reading from left to right), and as our focus is on her, our eye moves to the right, and we notice her immediate danger. 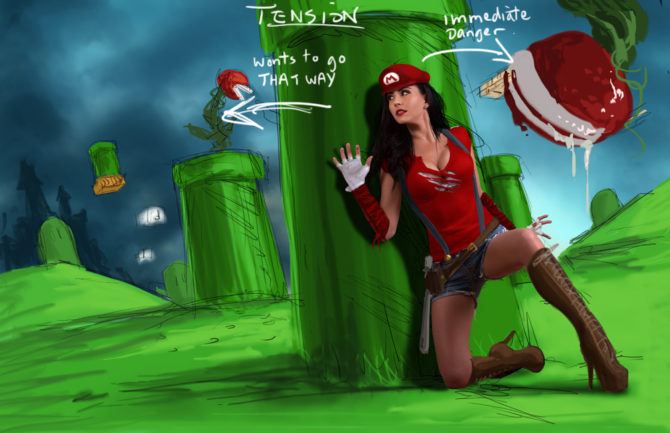 Just to illustrate this point further, flipping the image once again now with the included Piranha plant, we can see that it no longer has the tension. It almost feels like the plant and Mario are buddies, both trying to reach a common goal of getting to the castle. 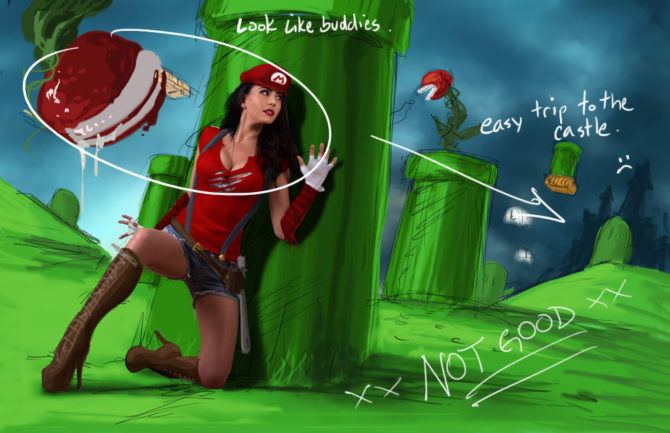 Anyway, once I had the composition nailed down, I needed to establish the perspective to draw in all the other elements. This was a bit harder than I initially anticipated. First I had to more-or-less eyeball the horizon line based on trying to remember how I was laying on the floor when taking the model’s photo. Then in Photoshop I zoomed way out, and established 3-point perspective points based on the horizon line, and where I thought it would look natural enough. I used photoshop guidelines to mark them, then on a separate layer, drew the perspective guidelines, each with their own color representing right, left, and vertical. 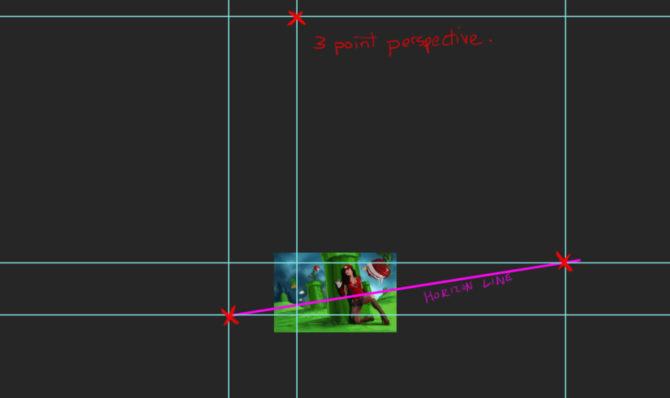 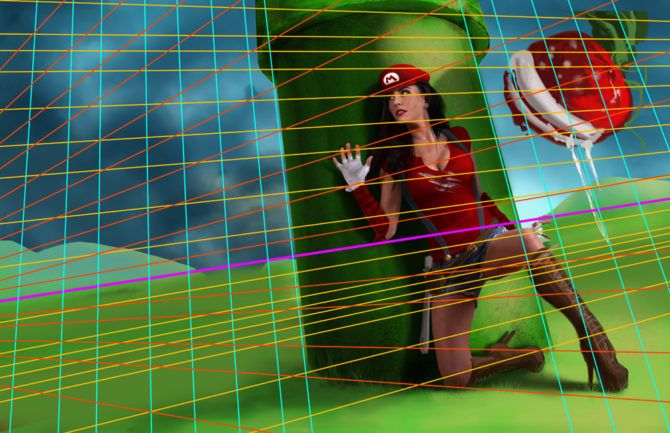 Once I had these perspective lines figured out (which actually took me a few tries) it was easy to sketch out everything else. I faded the perspective lines, and added a grey layer underneath my line layer with the opacity down just a bit, so I could see what I was drawing easily but still see the placement of the model and the main pipe underneath. 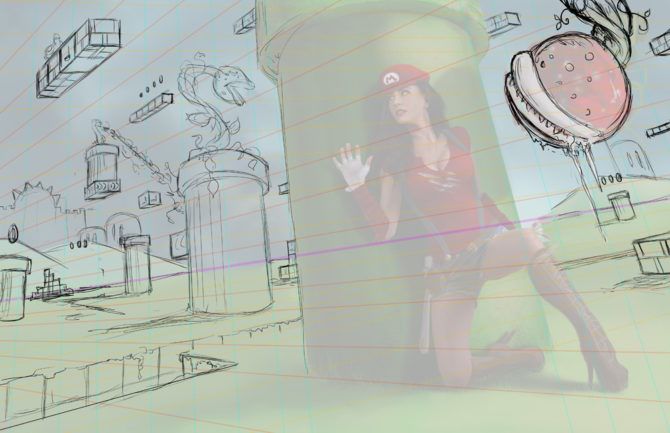 At this point things started to get a lot easier. The problem solving portion was done and now it was just the time consuming part of blocking in the colors and painting in the darks and highlights. 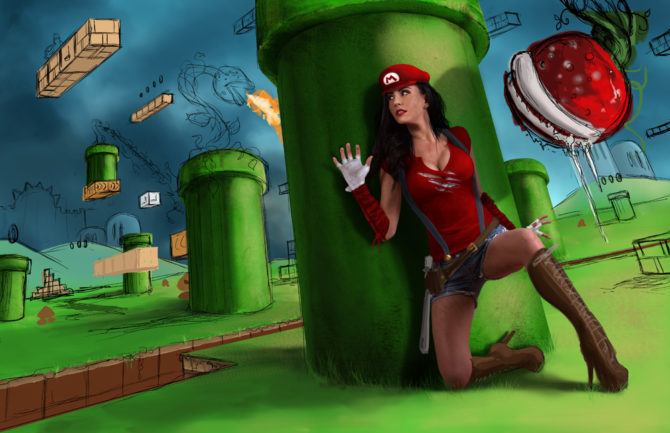 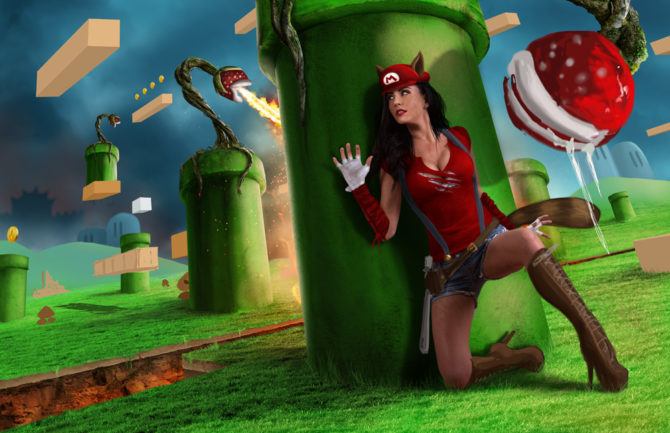 My main process of how I illustrate is to use a build up of multiple layers. I’ll start with painting an element as realistic as possible, then I’ll overlay some photo textures to give it that extra bit of realism. If I want to try some other ideas, I may create another layer on top of that and paint in more detail (just so I can delete it if I totally wreck what I’m doing).

I’m probably most proud of the Goombas here. To create them, I used a cartoony 3d element from the game as a base, then painted over-top to give the Goombas an entirely different look. 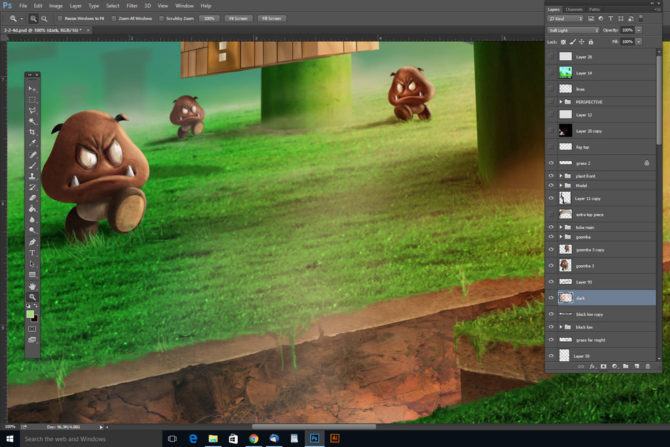 Once painting and texturing is done, I’ll add in some more atmospheric elements. Smoke, sparks, additional dirt and grime. Typically I finish working on the model before anything else, but for this, since my color sketch on the model was more or less accurate, I saved finishing up the rest of the detail on her until the end.

The last step I do with my composites, Is I will use the blur tool to blur certain edges to give various elements a more realistic feel, as well as blurring whole objects based on the composition’s depth of field. And lastly, I’ll add some color washes to the entire piece in way of painting on a blank soft-light layer. I find this step really helps tie a composite image together. 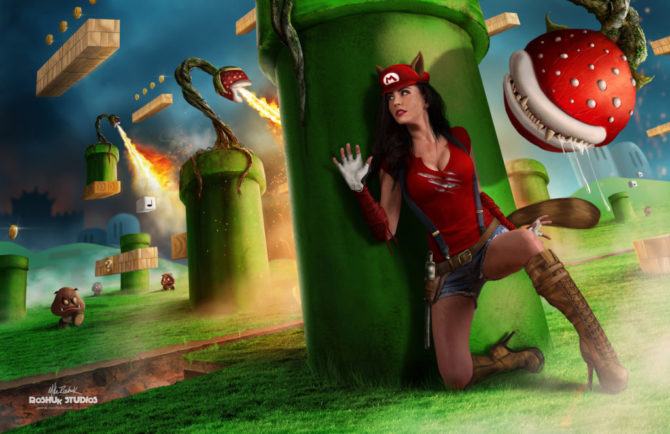 How I Created A Cinematic Thieves Inspired Photo Story