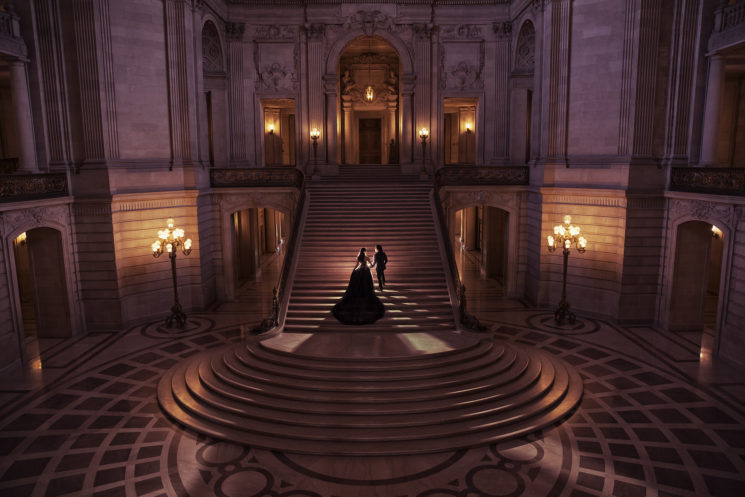 Wedding photography doesn’t often offer the creative opportunities photographers would like. The venues aren’t always that spectacular, you’re often working to a pretty strict time schedule, and some couples just don’t want to get all that creative.

For photographer Christine Diaz, though, there’s always time for inspiration to strike. With the outfits of the bride and groom, mixed with the beauty of the San Francisco City Hall, Christine was indeed struck. DIYP got in touch with Christine to find out a little more about that inspiration and how the image was made.

As a location portrait photographer myself, I often see images in my head as soon as I arrive at a location to shoot. As we wander around the area and discover new things, new images form. We asked Christine how the inspiration for this shot came to her. Was this something she’d known she wanted to create for a while? Or was it a sudden impulse?

This shot was more spur of the moment. I envisioned the shot based on what they were wearing which reminded me of the movie, Beauty and the Beast. I wanted to create a romantic display of this beautiful engagement couple who are very much in love.

Well, I think Christine definitely achieved what she set out to create. Despite being such a wide shot, it’s very obvious that the focus of the image is the couple, and it’s clear to see that they are a couple. The bride’s silhouette also has that ethereal, “Disney princess” quality.

Of course, any City Hall is a pretty public venue. We asked Christine about the challenges she faced trying to get the shot once she knew what she wanted to do.

Shooting at San Francisco City Hall can be challenging at times, largely due to the popularity of the location and potential number of strangers in your shot. As a result, we timed this shot to occur at a time when foot traffic would be less.

Timing is a recurring theme that comes up with location shooters, especially in potentially busy locations. You usually can’t just rock up and start shooting. You have to time it right, or it can end in disaster. At best you get other people in the shot that just don’t belong, or you can miss the shot entirely and just waste a whole lot of time. So, timing is key.

Christine also told us about the equipment and lighting setup used for this shot.

Well, I don’t know about the rest of you, but I think the light worked beautifully. Those long, long shadows, with the light just peeking down over the steps. A fantastic result.

Finally, Christine told us a little about her post-processing workflow.

I primarily use Lightroom and Photoshop to edit my photos. I imported this picture into Lightroom and played with the color temperature to make it more cool, and I adjusted my tint settings to bring in more magenta. I cleaned up the image in Photoshop. I also used Google Nik’s Color Efex Pro filters to enhance detail and color for this photo.

I always find it interesting to hear how many people use Nik software in their workflow. Each one just reinforces what a big deal it was when Google decided to pull the plug. Although, it’s not Google’s anymore, so Nik users are hopefully rejoicing at a positive future for the collection.

Everything comes together to produce a very beautiful final result. One I’m sure that the clients will love to have up on their wall, printed large, for many years to come.

Thank you for taking the time to talk with us, Christine.

How (And Why) I Shot This Beauty With Beast Feet Portrait

How I Created A Cinematic Thieves Inspired Photo Story