A few days ago we shared a post about how to surgically open a strobe and bare-bulb its guts (and also explained why it should or should not be done).

Reader Janne Kaakinen shared an interesting device that will get as good results as any bare bulb, while minimizing the sacrificial light that the device actually absorbs as part of the diffusion action.

Best of all, it does not require you to open a strobe and perform a capacitor shocking operation.

It was made with 4 small plastic parts (scavenged from a broken umbrella, but I guess wooden skewers would work just as nicely – just watch for the sharp tips), and some mirror contact paper.

He named it The Reflect’O’Cone, and compared it to an Omnibounce.

Simple ideas work the best – making a simple cone from a mirror contact paper and cutting the tip of the cone off (making a small hole in the bottom of the cone) resolved the problems encountered in the previous tests. See this page if you need a template for the cone.

The Cone is tested against the Omni-Bounce. The Reflect’O’Cone seems to spread the light to the sides quite evenly and it does not cut nearly as much light as the O-B. Two landscape-oriented images in the image “Reflect’O’Cone aka. LightCone test 2” were taken with auto white balance, while the two portrait-oriented shots were taken with white balance set to “flash” – which brings out how the Omni-Bounce changes the color of the light.

There were only two little easily correctable problems in the Reflect’O’Cone when compared against Omni-Bounce:

Both of the issues were fixed by playing with the size of the hole at the bottom of the cone and by altering the cone’s width and height. Try for yourself to find the best ratios that work for you. 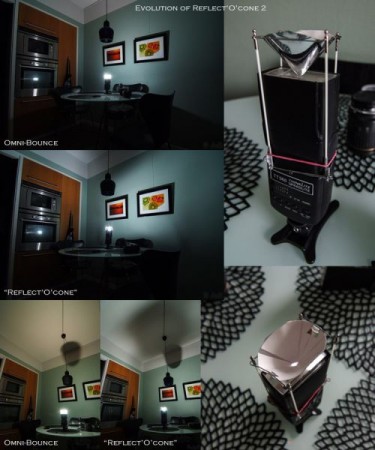 That’s it, now go and make a better version of it – and drop me a line to tell how it works! :)

Here are seven best ways to create smooth, buttery bokeh in your photos

Great Ways To Include Shadows In Your Pictures – Discussion

Coloring shadows can make your photo, this is how you do it with gels