When I saw Vesa Lehtimäki‘s photos depicting the life on the freezing planet of Hoth I was immediately drawn to it. Partly because I am a Star Wars fan boy and partly because they looked so darn good that I had to learn more about how they were taken. 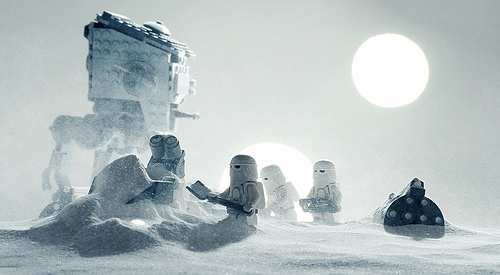 I mean, just swap those little plastic characters with people and you could actually believe that this series is photojournalism at its best.

I contacted Vesa and asked him a bit about the process, the setups and the inspiration for the series. The answers I got were a solid proof that inspiration and motivation trump gear and budget.

Take this image of Koensayr BTL Y-wing starfighter for example – it took nothing more than a table and cooperating weather to produce. 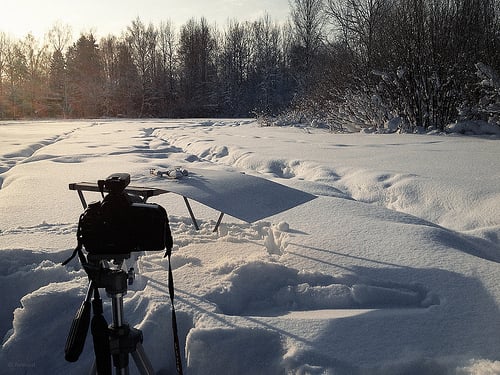 Or this image depicting the Arrival of a Star Destroyer, using a projector to create the two of the three moon of Hoth. 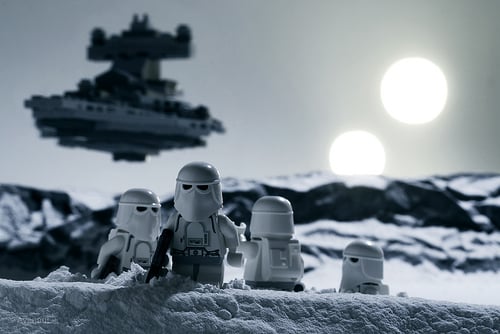 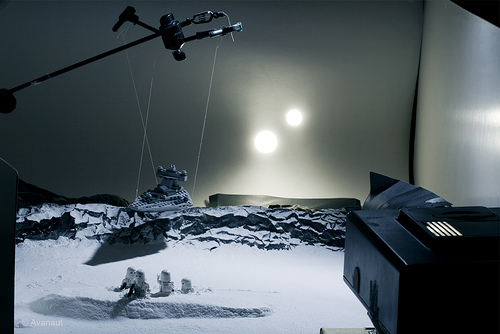 Or this one, demonstrating an Inconvenient Flaw of the Y-Wing shot in a CD storage box filled with water and lit by an A4 light table. 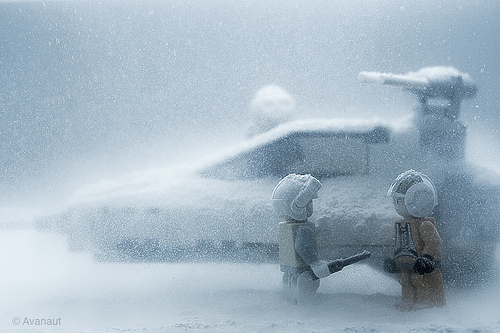 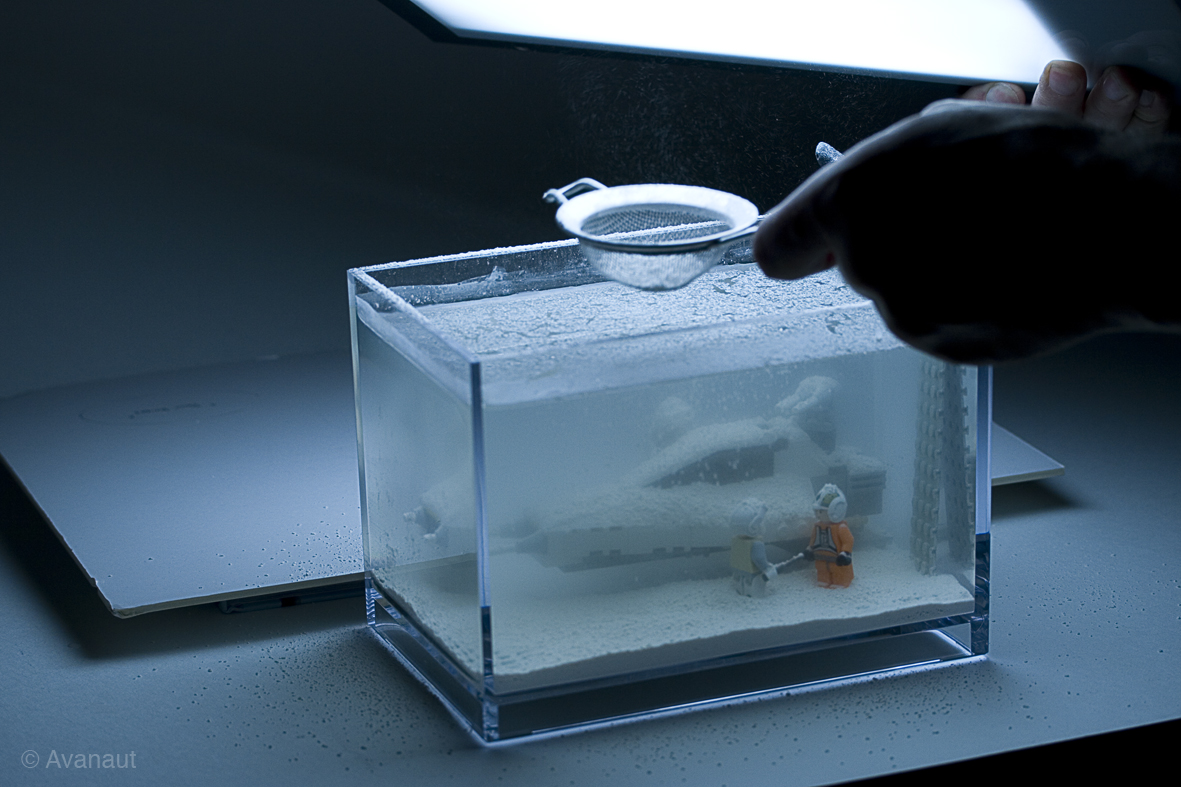 I was really curious about the motivation for the project. It was kinda surprising to learn that Vesa started out with no pro gear and mostly uses “found” objects to create his scenery. A slide projector for snoot and an A4 light table for softbox.

Photographing toys was initially a project to preserve our kid’s toys in photographs, to save up some childhood memories. Out of curiosity, I uploaded a few in Flickr in June 2009 and I’ve been going with the flow since. There never has been a plan, but I do observe the feedback and try to figure out patterns. What is a good photograph, what works once uploaded? I still have no idea, it’s always a mystery. I’m having great fun, though.

I am not a professional photographer so I did not have any pro gear, just a camera, a Canon 400D, when I started. I used whatever came in handy to light the photos, pocket led torches, an old colour slide projector and an A4 size light table I had for illustration work. Gradually I upgraded with better pocket torches and an old Nikon camera flash I dug up from a trashbin. I use pieces of white and black cardboard to control light, sometimes a diffuser I made with some gatorboard and semi-transparent architect drawing paper. It’s a kind of organic process of finding new things, really, not knowing too much can be a good thing.

With time both gear and concepts were upgraded:

My photographing process generally starts with a raid to the kid’s toy drawer, I borrow his stuff mostly. Recently I have bought some of my own toys just for photography but it is not as much fun, it becomes serious when planned like that. I use very little else than just the toys, maybe some twigs, or sand/snow because I like the toy to be the star of the picture. What I found for snow is a typical result of my photography process, I try things, ditch the stuff that doesn’t work and move on. I try materials on my own and I try materials others have used to see if they work for me. For snow I’ve used plaster powder, talcum poder, powder sugar, baking soda and, finally, baking powder, which is just excellent stuff!

Currently I am using a Canon 5DMK2 with some excellent lenses, like the 100 mm 2.8 Macro, and the 16-35 mm zoom. I also now have a proper Canon Speedlite flash now. None of this is any good without a wireless remote trigger, it’s essential for me. 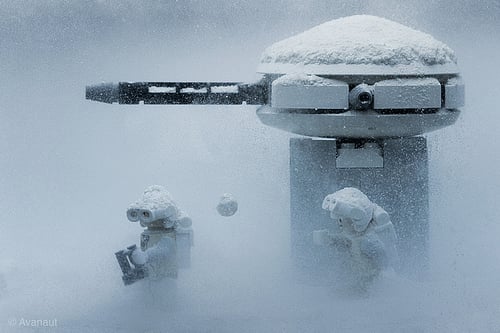 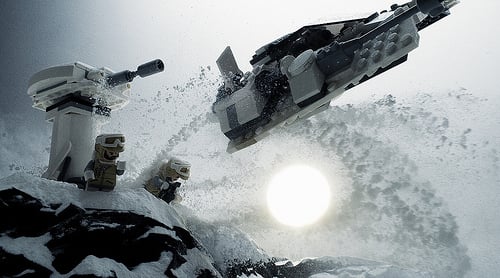 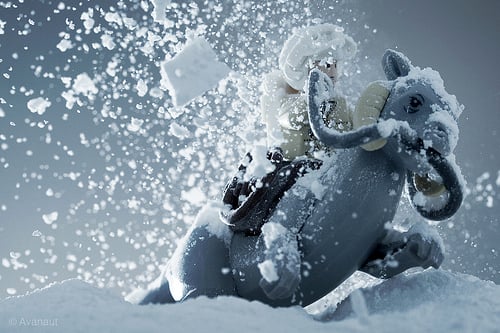 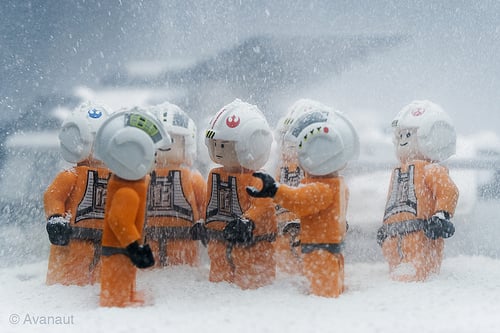 If you want to watch more of those tough glorious moments of life on Hoth, Vesa has a full set of them here.