With the popularity of fashion shoots and this blog increasing interest of high speed photography, I thought it would be interesting to break down a shoot that involves both, Kamerakind were happy to assist. 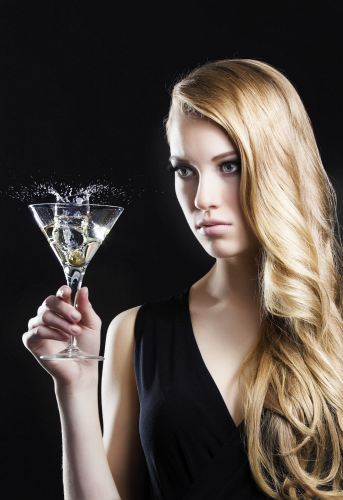 We had the concept of a beautiful model holding a Martini glass – shaken, not stirred – while she is bored out of her senses, an olive would be falling into it.

To get the splash just right, we needed a way to capture the olive a split second after it hits the martini. While it could be done with “simple” throw-the-olive trial and error, or with some Photoshop help, we wanted to get things in camera and to do so as accurately as possible, so we pulled out the old high speed photography rig.

The process for the photo to be taken involved an olive passing through an industrial light barrier, which is connected to an DIY-arduino-box (see details below). After an adjustable (variable) amount of time (about 200ms) the arduino triggers a hot shoe flash.

The hot shoe flash, in turn, triggers a set of Elinchrom Ranger Quadra with A-Heads studio flashes at its highest setting, so we get the shortest flash duration and the sharpest, frozen splash effect. (Unlike hot shoe strobes, the Ranger Quadra gives the shortest burst on its high setting). 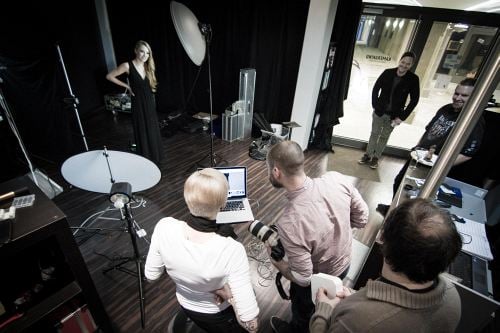 The main light was a beauty dish (white, 70cm, camera right) on the Ranger-B port with 33% of the power. 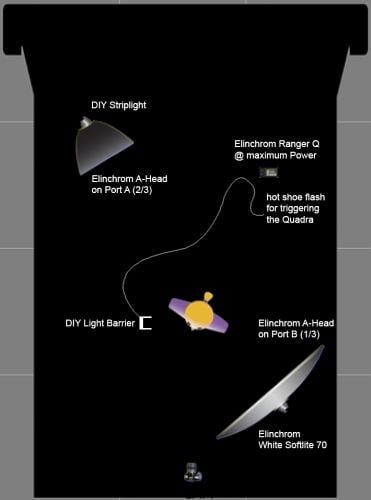 To get a nice rim definition of the glass we used the A-Port with 66% of the power and a makeshift DIY-striplight. Makeshift as made from a gutter pipe, some aluminum foil, an old cover of a softbox and – of course – some gaffers tape. The nice things about the strip is that in addition to lighting the glass it doubled as a rim for the model – Sophie. 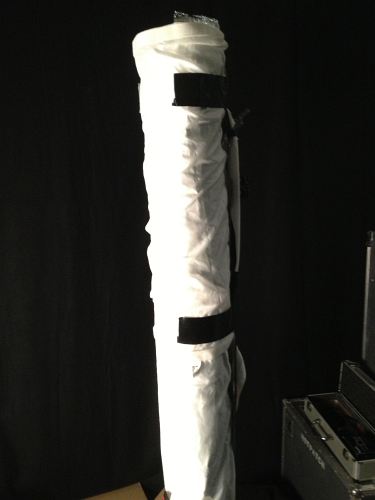 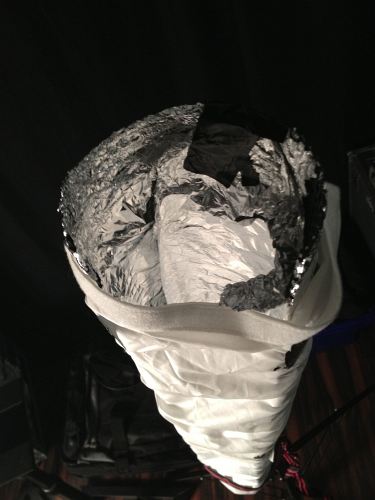 The beauty dish, placed at camera right, put some great light on the face of our model. For the opposite angle we thought a striplight would be the perfect choice,  so that we get a hard edge towards the left side of the model and the needed light for the glass from behind to get the splash illuminated. We used a powerful head for this job, because the DIY-striplight is perfect from afar – but far from perfect and eats up a lot of light. Considering this and some distance adjustments we got the wanted look.

How Do You Trigger Such A Setup?

The general setup for high speed photography is that you set the camera on bulb (or on some other long exposure) in a dark room. While the shutter is open, the strobe pops at the right time to freeze the splash. So although the shutter is opened for quite a long time, the only light is coming from the strobes. Here is how this went for our particular setup: 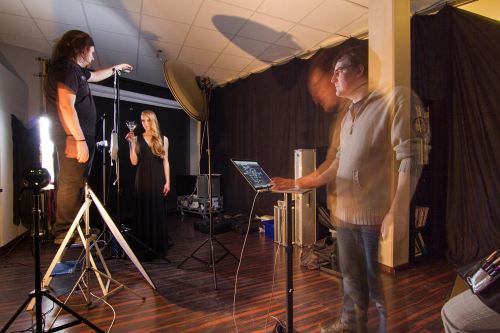 The camera was triggered by hand, which stated the event sequence. The timing and process went as follows: (1) Camera man would count: backwards “3 – 2 – 1 – Go”; (2) the camera shutter was remotely pressed (3) Our assistant on a ladder released the olive; (4) olive passes through the gate; (5) Gate triggers Arduino, which triggers the hot shoe strobe; (6) Hot Shoe strobe triggers the A heads.

The model’s position and specifically the glass position were fixed. To make it easier we used a ring (the first thing we found) hanging on a nylon string a few cm above the glass. The dropping height for the olive was also pre-set, to keep the timing constant and the needed height was marked on the lighting stand for the light-barrier. 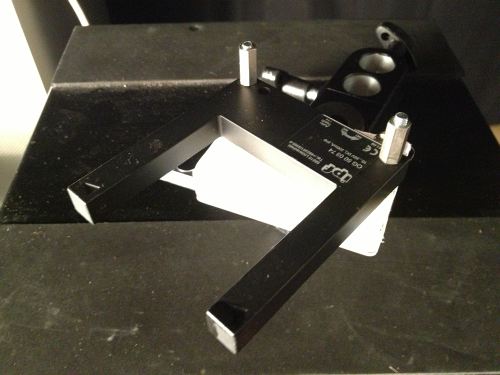 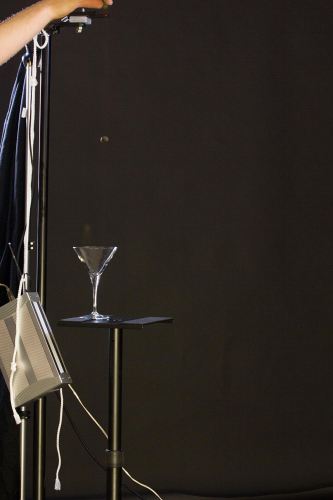 The studio was completely dark, the only light was the modeling light of a fourth – unused – flash. Thanks to the remote control of Elinchrome it was no problem to switch it on and off via computer. The camera was in manual mode with a shutter speed of 1 second @ f9.

We wanted to make it right and definitely not to fake it so we used the original Martini Bianco. Unfortunately this stuff is sticky as hell. It turned out to be quite a mess.

The bigger problem was the timing – the model knew when the olive was about to hit the glass, so it was quite hard for her to look relaxed and bored. But she did quite a good job. After every shot we had to use a new, clean glass. Instead of drinking the remains, we used it again. This is probably a very important hint, because you will need a lot of attempts…

BTW: Martini and Makeup are not best Friends…

We masked out our high-end-positioning-device (that crappy ring) and everything else was just basic beauty retouching. Nothing fancy there.

The circuit we used is quite simple, when you look at it. The 12 V needed for the light barrier and the Arduino Duemilanove comes from a power supply unit. The output of an industry standard light barrier is connected to the analogue input (through a voltage divider). After an adjustable time delay in the order of milliseconds, a small 5V print relay is activated by an Arduino output through a ULN2803A. This relay will then bypass the hotshoe of a €10 flash unit and fire the flash. More flash units would be operated as optical slaves. If you are interested, you can find the (very simple) code here. 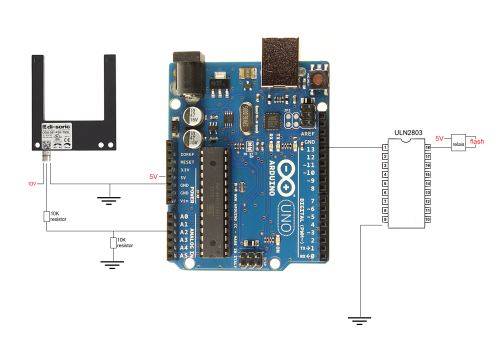 We tried to keep it simple, really – to keep things a little tidier, we put everything inside the housing from an old external drive. 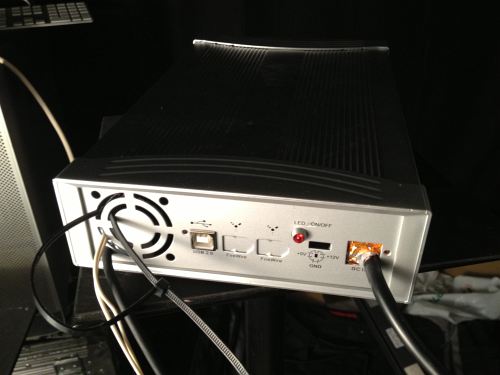 The light barrier is version 2 – the first one was home made, out of a sawn off laser pointer and a photo-resistor. Unfortunately, this construction was only useful for large devices. The new forked light barrier is much simpler and at the same time more sensitive – any transparent motive larger than 0.5mm would trigger the switch process.

If you want to see how the shoot looks like from behind the scenes, here is a short clip.