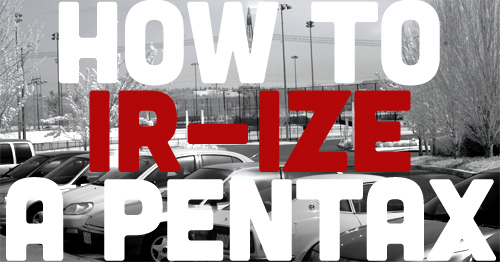 A few days ago we had a tutorial showing how to crack open and IR-ize a Cheapo $28 Canon point and shoot. Today we are upping the stakes doing a similar operation on a Pentax K10D. This installment is more of a story told by Jerry Biehler than a micro-step-by-micro-step tutorial I hope it will inspire you to try new stuff. Of course, you are still running the risk of nuking your camera, and you will definitely void the warranty (if for some weird reason you still have a warranty on your K10D), so know the risk before you get to work.

Since I recently bought a Canon 60D I have a spare dSLR lying around, my old Pentax K10D. It’s not particularly valuable so I decided to convert it over to IR. This is the third one I have done. The First was an old Kodak DC210, then I did an electronic modification on my Sony DSC-v3 that allowed me to move the hot filter out of the way with a tiny button.

The Pentax one was a bit more complex. Lucky for me I had the service manual for the camera to help with any difficult steps.

Took the camera’s case off. 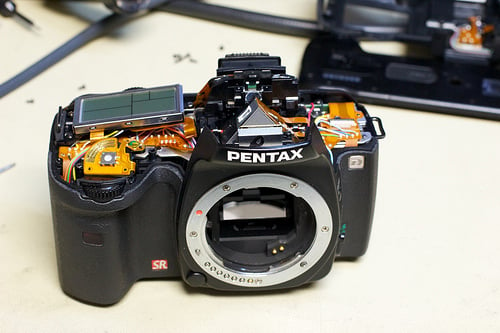 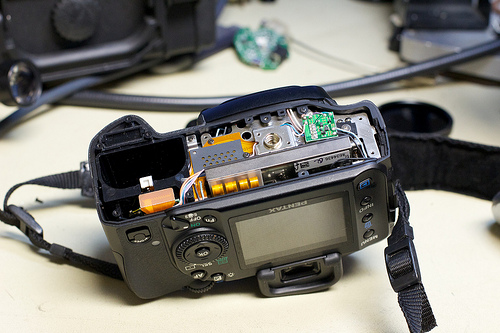 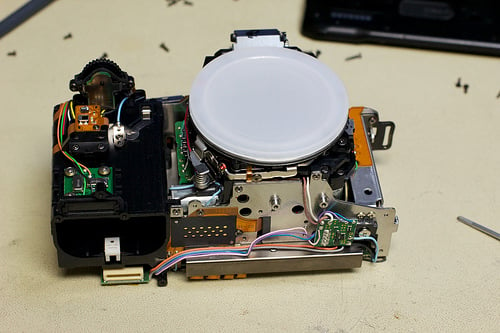 Desoldered the main board and removed it. 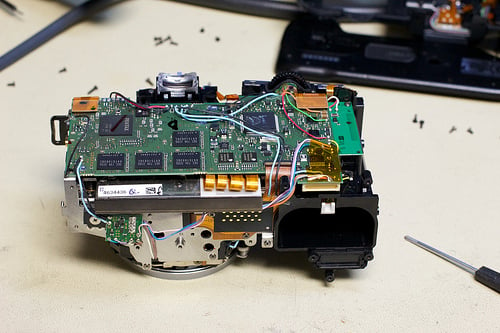 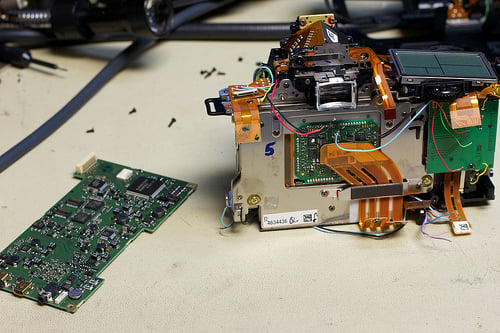 Then pulled the CCD block off. This block holds the sensor as well as the linear motors that do the shake reduction. The IR-Cut filter is the bluish glass over the sensor 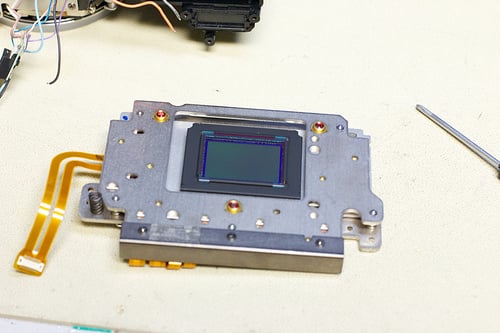 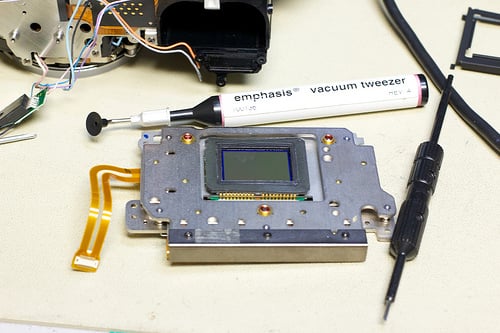 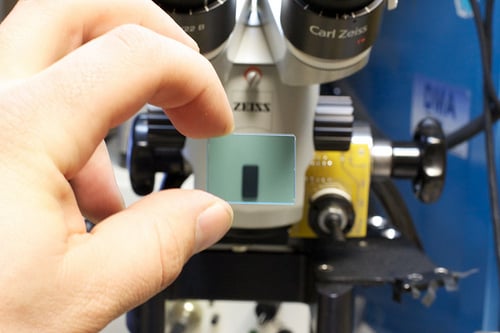 By the way, if you ever wondered what’s a sensor looks like under a microscope, here is an image I took: 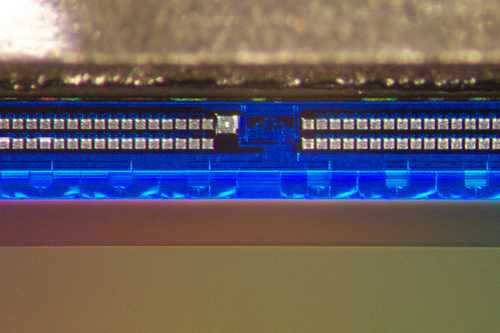 The IR Cut filter was only 1mm thick. The IR filter I had planned on using was 2mm thick. I found a dichroic filter made for astronomical use and they are only 1 mm thick. I got it and cut it to size with a diamond ring saw. Unfortunately the corner broke. So I just cut the thicker one to size and used a diamond file to fine tune it. 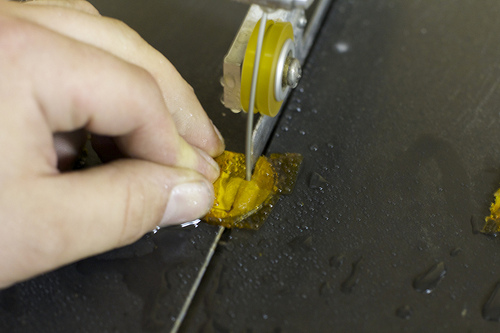 At work we have a little portable clean box so I used that to reassemble the sensor block with its new filter. When I got home I reassembled the camera. I used gauge to set the comparator stage up to set the sensor block to the height as specified in the manual. (This is kinda the hard step or the gear requiring step).

This ensures the sensor is the right distance from the lens and parallel to the focal plane of the lens.

The manual specifies a specific distance from the front of the lens mount to the back plate of the detector assembly. This sets the proper back focal length. Though this does not mean so much in my conversion since the thicker glass filter and the focal length of IR changes the effective focal distance of the lens. So mostly using the comparator allows me to make sure the sensor is parallel to the plane of the lens mount. If it was not parallel one part of the image might be in focus and the other not. Kind of an unintentional tilt shift effect.

Sealed the screws in place with some nail polish and proceeded to re-solder the main board back in place. RoHS solder sucks! 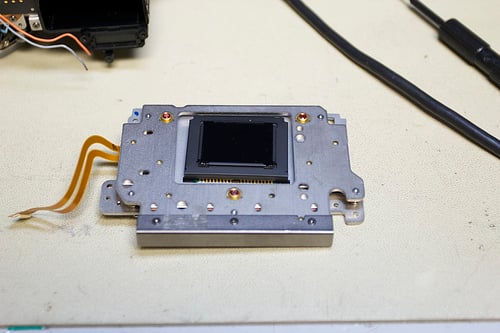 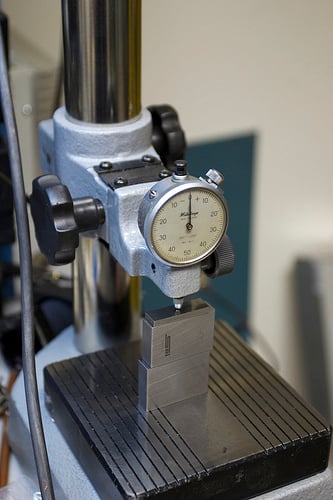 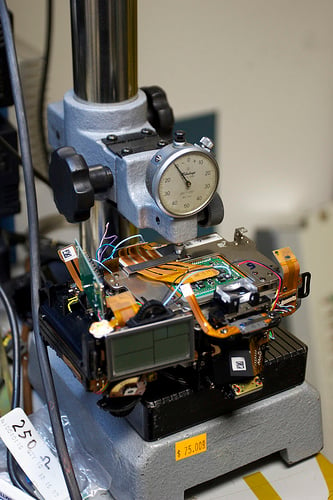 Got it all back together and found the battery. It turned on! I took a shot of something about 4 feet away and it was out of focus but something 6 feet away was in focus. So I had massive front focus due to the thicker IR filter in front of the sensor as well as the different refractive index of the glass at the longer wavelengths.

To solve this I put the camera into debug mode which has a mode for adjusting the focus offset. I had to increase it 700 microns to get the auto focus to work as it should. But everything seems to work now. The only funny thing is the camera is not commanding the aperture to the right spot. If I set it to max on the dial it still closes down. No big deal, really, since I can override with the aperture ring on the dial.

Here one photograph I took. Looks like you can see some corona or something on the power lines. 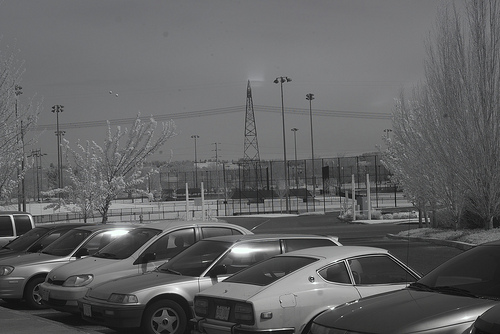 Jerry Biehler is an amateur photographer, a machinist and a well rounded nerd. His latest job was as a Motion Control Technician at Laika Entertainment on the movie ParaNorman. You can follow his work and makings on his Flickr.

YASBT – Yet Another Shaped Bokeh Tutorial