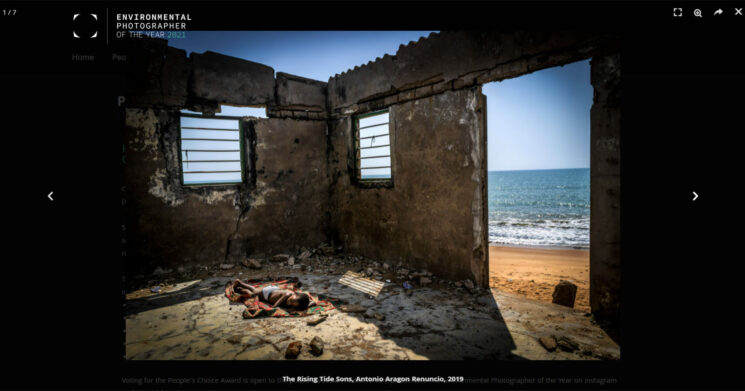 The winner of the Environmental Photographer of the Year 2021 award has sparked a controversial discussion for his use of children in both his winning image and the rest of his portfolio. This has prompted a closer look at the way competitions approach imagery of minors and the ethics surrounding this.

Spanish photographer Antonio Aragón Renuncio placed first in the recent competition, netting him a cool $10,000 for his image “The Rising Tide Sons”. The photograph depicts a young black child asleep in the sun in a ruined house on a beach in Ghana. The image caption explains that the coastal erosion in this part of the world is having a detrimental impact on the local population, displacing mostly women and children. According to Aragón Renuncio, the image is raising awareness of rising sea levels and the impact that this has.

This photo that won won Environmental Photographer of the Year 2021 raises so many questions.

But upon seeing the winning image, Benjamin Chesterton of the film and production company Duckrabbit took to Twitter to call attention to the child seemingly asleep in the photograph, saying that it “raises so many questions”.

He later digs into Aragón Renuncio’s portfolio and finds more images of sleeping black children. Chesterton says that he wanted to highlight the potential for child exploitation by photographing vulnerable children and placing them in an international competition with little regard to their consent or safety, the images of which are then shared and profited from.

Chesterton also raises the question of whether it is ethical in such a competition seeking to highlight the truth about environmental impact to show a scene that has so clearly been staged. There is nothing strictly in the rules of the competition stating that it is forbidden to stage a scene, however, it does state that “entrants should understand that the objective is to remain faithful to the original experience, and to never deceive the viewer or misrepresent reality.” Presumably implying that entrants should uphold the spirit of the rules rather than the letter of them.

How many parents do you know put their children to sleep in abandoned buildings in the sun?

Oh look another photo of a sleeping Black child by Antonio Aragón Renuncio.

This time on a desk. pic.twitter.com/oMvw0ipWQz

Chesterton also went so far as to call out the judges of the competition for not addressing these questions, saying that although he believes “in the freedom to take pictures and the importance of documenting the challenges children face.” He continues “I am against the exploitation of children to market the careers of photogs who should know better and orgs that have no commitment to the welfare of those children.”

Subsequently, other photographers called for comment from the competition organisers. They responded to questions from Petapixel saying that they will review their policies on staging images and child protection for the future, though they remain satisfied that the winning images from this year have not violated any ethical or competition rules.

Now I’m going to stick my neck on the line and give my (probably insignificant) opinion on the matter. There is quite a lot to unpack here. Firstly, as a parent (well actually as a human to be honest), I would hope that no child would ever be put in any danger ever for the sake of creating a photograph. That much goes without saying. It doesn’t matter where they are in the world or what colour their skin is, this is simply non-negotiable.

In Aragón Anuncio’s defence, we know nothing about the child in the image. We don’t know who he is, how he ended up in the image or how the image was created. It’s quite possible that the child wasn’t exploited or placed in any danger. In fact, he or his family may have been paid by the photographer to appear in the image. I know that opens up another can of worms, but I would hope that that child would be treated far better pretending to sleep for a photograph than they might be from other potential sources of income. I also assume that Aragón Anuncio obtained the correct permissions and model releases from the child’s parents or guardians. But we will probably never know, the photographer has not responded to questions.

As to the children’s skin colour in the portfolio. Well, this is most definitely a delicate subject, and one that as a light-skinned European I am probably not in a good position to comment on. However, I do firmly believe that cancel-culture is dangerous generally. Not because the questions that get raised are not worth asking, but because there is essentially no discussion or conversation. This current culture is not helpful for anybody and is itself a form of censorship. To put a blanket statement implying that a white photographer is exploiting a black child simply because of the differences in skin colour is simply not correct. Further investigation and conversation need to happen before we condemn anybody.

The second question of staging an image for such a competition also raises ethical questions. Whilst no rules were technically broken, and the competition even goes so far as to state this saying “staging is not specifically barred in our 2021 competition rules and guidelines”. However, I do believe that in some instances staging an image for such a competition and not disclosing the fact that it is staged is disregarding the spirit of the competition and its intentions. The world is already too full of climate change deniers, and a high profile competition that is addressing climate change will be immediate fodder for sceptics if the winning image is found to be fake.

On the other hand, the caption to the winning image also doesn’t say that this isn’t staged. It could very well be an artist’s interpretation depicting the rising sea levels and depopulation. In my opinion though, if this is the case then that should be clearly stated to avoid any confusion.

Photo-journalists and documentary photographers and filmmakers adhere to strict ethical rules, perhaps it is time that competitions did also.