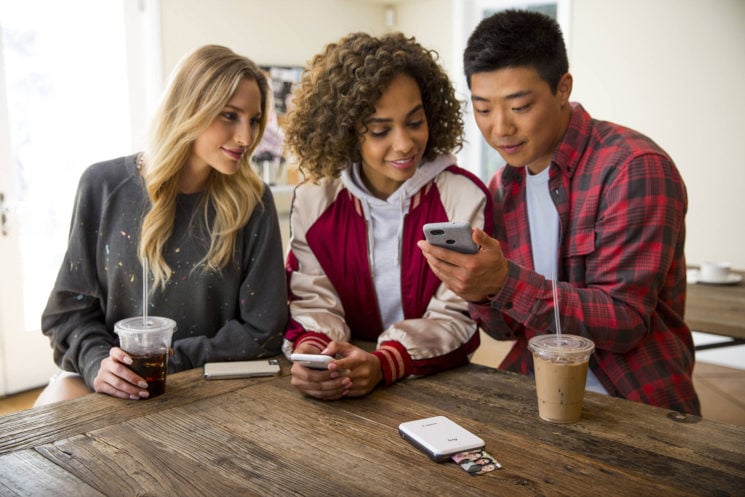 The popularity of small instant prints is back on the rise. And it’s rising at a pretty surprising rate. New instant cameras have come out to satisfy this trend, such as the Fuji Instax, and even Polaroid is launching new ones. But with more people than ever shooting snaps with their phones, small instant mobile photo printers seems to be where it’s at.

With that in mind, Canon has now launched the Ivy. It’s a mini photo printer, not much bigger than a smartphone, which makes 3×2 prints from your mobile device. It’s available in several colours, works with both iOS and Android, and doesn’t use any ink.

There are, of course, other options, like the Fuji Instax Share SP-3, although that seems quite bulky when compared to Canon’s new offering. It’s also more expensive. Coming in at only $129, it’s substantially less expensive than the $192 demanded by the SP-3.

The Ivy takes up to about 50 seconds to make a print and offers a resolution of 314x400dpi. It uses ZINK Zero Ink technology and fits up to 10 sheets of ZINK Photo paper. Refills sheets come in packages of 20 or 50. The built-in rechargeable lithium-ion battery allows you to shoot up to 20 sheets per charge, although it will fully recharge in about 90 minutes – presumably you can do this from a USB power bank.

I’ve been thinking about getting a little mini printer for my phones ever since the SP-3 was announced. But at a lower price point and smaller size, this looks to potentially be a better option for me. I wish they’d had them at The Photography Show last month so I could have checked one out in person, though.

If you want one, they’re available to buy now in three colours. Well, I say three colours, the tops to them all are white. It’s differently coloured bases.

This is where the one drawback comes to this printer, though. At least for the moment. Refill paper packs aren’t available just yet, and they’re not listed for pre-order anywhere, either, that I can find. But they will be coming in at 20 and 50 sheet packs for $9.99 and $24.99, respectively.