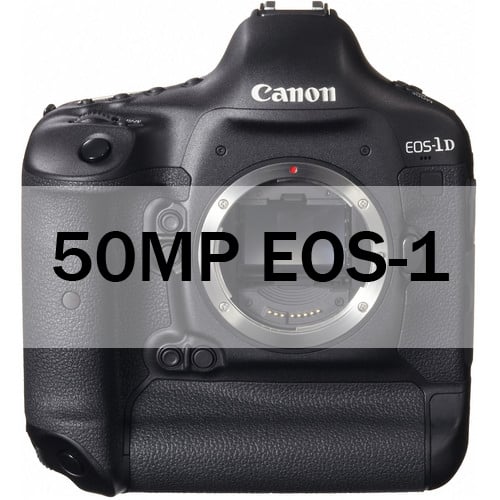 Canon Rumors has been told that the company is looking into incorporating its new 50.6MP sensor, or a variation of it, into an EOS-1 style body.

While there’s no certainty at this point that such a camera will ever be produced, the move would allow users to enjoy the ergonomics, stronger battery and other advantages of the larger body.

Either way, should the camera materialize, it won’t happen until after the EOS-1D X Mark II is announced.

It is said that Canon’s decision regarding the high-end camera will be determined by the sales of the first 50MP cameras – the 5DS and the 5DS R.

The development of a 50MP camera was a huge step forward for Canon and it seems the company is trying to make the most of the new sensor. Should the 5DS sell well, and people will not be intimidated by the huge files, it makes sense for there to be a more expensive version with several additional features.

The importance of the 50MP sensor to Canon’s current lineup was made evident when it was recently reported that the release date of the 5D Mark IV will also rely on the sales volume of the 5DS.

Canon is already getting a sense of the megapixel monsters’ popularity as they became available for pre-order (5DS and 5DS R) on Monday. The rest of us will have to wait until June 29, when the camera starts shipping, to see how many of our friends and colleagues start bragging about their new camera.

Canon’s 50MP Camera Specs Leaked. Could It Be Lacking Video?