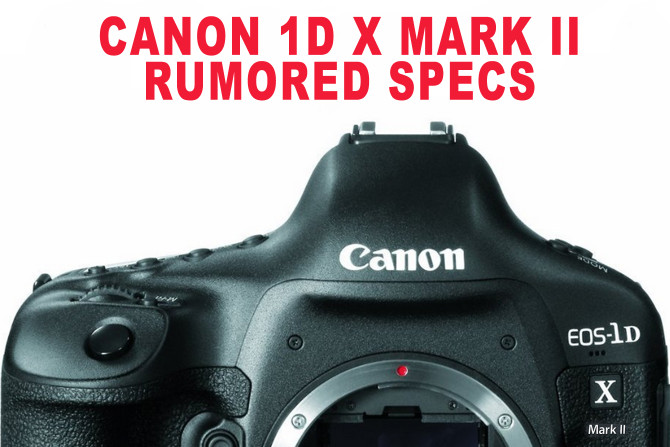 Users of Canon’s flagship DSLR, the 1D X, will be happy to know that Canon Rumors has received a list of rumored specifications for the upcoming Mark II.

The release date, said to be sometime during the first quarter of 2016, is also important for those waiting for the 5D Mark IV as previous rumors stated it won’t be released before the 1D X replacement.

If the rumors are true, the new flagship model will put up a good fight against Nikon’s upcoming D5.

According to the source, the Mark II’s sensor will see a slight bump in megapixels going from 18.1 to 20mp. Obviously this will be a CMOS sensor; sorry, no QIS sensors available just yet.

The frame rate is said to receive a substantial boost from the current 14fps to 16fps while using AF or a whopping 20fps in live view mode.

The autofocus system will surely raise a few eyebrows. On the one hand, it is said to have only 61 AF points – that’s the same as the 1D X, but less than the 7D Mark II’s 65 AF points.

On the video end of things, the Full HD frame rate is listed as 240fps which will allow for some nice slow motion footage, but the big news here is 4K video at 60fps.

All that 4K footage will require some fast memory, and as such one of the CF memory card slots will be replaced with a CFast slot.

Additional features that are more than welcome, though by no means deal breakers, are GPS and WiFi. It’s my opinion that every new DSLR should include these features, and I’d be more than happy to finally see them in one of Canikon’s high-end models.

A rather surprising new feature is a touchscreen LCD, but it can be turned off if you prefer old-school controls.

The camera is also said to have more customizable menus and buttons.

A key feature noticeably missing from the list is the high-ISO capabilities.

Some of these features (such as the 4K@60fps and stills at 16/20 fps) might seem a bit out there, and while this entire list should be taken with a grain of salt, they aren’t that far off from the rumored specs of the Nikon D5.

Nikon’s flagship replacement model is also said to be capable of 4K video recording, though at 30fps, and to include Full HD slow motion at an unspecified frame rate. If Nikon really will release the D5 with 4K, I think few will be surprised if Canon will be able to one-up them and offer 4K@60fps.

Also the super-high 16 or 20 fps sound more believable when we consider that the D5 could boast 15fps. This will maintain Canon’s advantage in this area, currently offering up to 14fps compared to 11fps in the Nikon D4s.

What’s your take on these specs? Too advanced or just right for a flagship camera?