A camera prototype equipped with the newly developed CMOS sensor and the sensor. Source: Canon

Remember all the oohs and ahhs when Canon announced the record-breaking 50MP sensor of the 5DS? Well, the company just revealed that it has developed an APS-H sensor with a whopping 250 megapixels.

According to Canon this is the world’s highest number of pixels for a CMOS sensor smaller than the size of a 35 mm full-frame sensor, and while it is likely to have some affect on consumer cameras, I wouldn’t expect to see a 250MP DSLR or mirrorless camera anytime soon.

Putting aside the technical measurements and getting to actual use, Canon added that “when installed in a camera, the newly developed sensor was able to capture images enabling the distinguishing of lettering on the side of an airplane flying at a distance of approximately 18 km from the shooting location”.

Canon did not specify with which lens the photo was taken, though the only photo released of the camera shows it with the EF 35mm f/1.4 USM lens.

The company went on to clarify that capturing the image described above “employed a combination of optical and digital zooming while distinguishing of image content was realized through the magnification of an approximately 1/40,000th-sized area of the captured image”.

So maybe not as impressive as it first sounded, but you’re still talking about a distance of 18km! 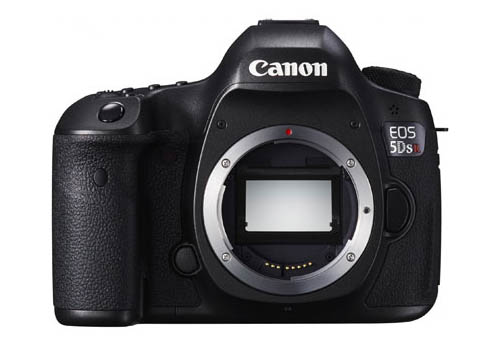 Advancements such as circuit miniaturization and enhanced signal-processing technology enable the ginormous sensor to achieve a signal readout speed of 1.25 billion(!) pixels a second, thus limiting “problems as signal delays and slight discrepancies in timing” often found in high-MP sensors.

Thanks to the crazy signal readout speed the sensor is able of capturing video at a resolution 125 times that of Full HD and 30 times that of 4K. Not bad, huh?

This should allow users to zoom in the video until their finger hurts, while maintaining high quality footage. Assuming you can find a lens capable of resolving 250MP, that is.

The downside is that the video only captures 5 frames per second, as you might have figured out by the readout speed, but the technology is constantly improving.

Discussing possible uses for the monster sensor, the statement adds the following:

“Canon is considering the application of this technology in specialized surveillance and crime prevention tools, ultra-high-resolution measuring instruments and other industrial equipment, and the field of visual expression.”

Consumer electronics aren’t mentioned specifically, and a 250MP sensor would be too much for computers, sensors etc these days anyway. That being said, the technological advances achieved while developing this sensor could come in handy while developing consumer-oriented sensors.

This is not Canon’s first time breaking the megapixel record for APS-H sensors. Back in 2010 the company announced the development of a 120MP sensor.