About a month ago,  Vivo announced the international version of their X60 series. The X60PRO+is a flagship-level phone, and while pricing wasn’t known at the time of the shooting, you can find it for $1,099.99 on Amazon.

All the press materials boast about the camera capabilities. So naturally, I compared it to a modern DSLR – the Sony A7III.

I mean, a few years back, you would have said that this is an apples-to-oranges comparison. Not that fruits can’t be compared. But you can definitely buy a decent mirrorless for the same price as the Vivo X60 pro plus – roughly $1000.

Vivo collaborated with Zeiss on the camera systems in this phone. You get four rear cameras and one selfie camera. With Zeiss in the picture (I could not resist the pun, sorry), I had high expectations from this phone, and at least on paper, it looks very promising.

To make this a fair fight, we will not use any fancy gear, just a standard Zeiss 24-70 f/4 lens. Zeiss vs. Zeiss… Sounds like a fair fight. To be absolutely fair, some of the things that the Sony does optically, the Vivo is doing by extrapolation and image-processing algorithms, but let’s put this aside for the sake of this comparison.

The phone fits nicely into my hands but maybe a bit too big for smaller hands. It lacks the ergonomics of an actual camera, and understandably so; Its main function is not shooting. The back has the lens array on a little bump, like most modern phones. Unlike a Mirrorless camera, all the lenses are built-in, and there is no need to swap lenses. If your main goal is to have a camera with you at all times, the X60 pro+ fits in your back pocket, which is much better than any “real” camera in terms of size and weight.

As with most phones, you can take pictures with the volume buttons, but I found the volume rockers sit too far down to be comfortable for shooting. The placement makes perfect sense as volume rockers, as a shutter button. Meh… not so much.

For our first test, I just took some photos in bright daylight settings. I did this at the high-res circa 50-megapixel resolution, which is about twice as much as the Sony A7III at 24 megapixels.
Let’s look at the photos. 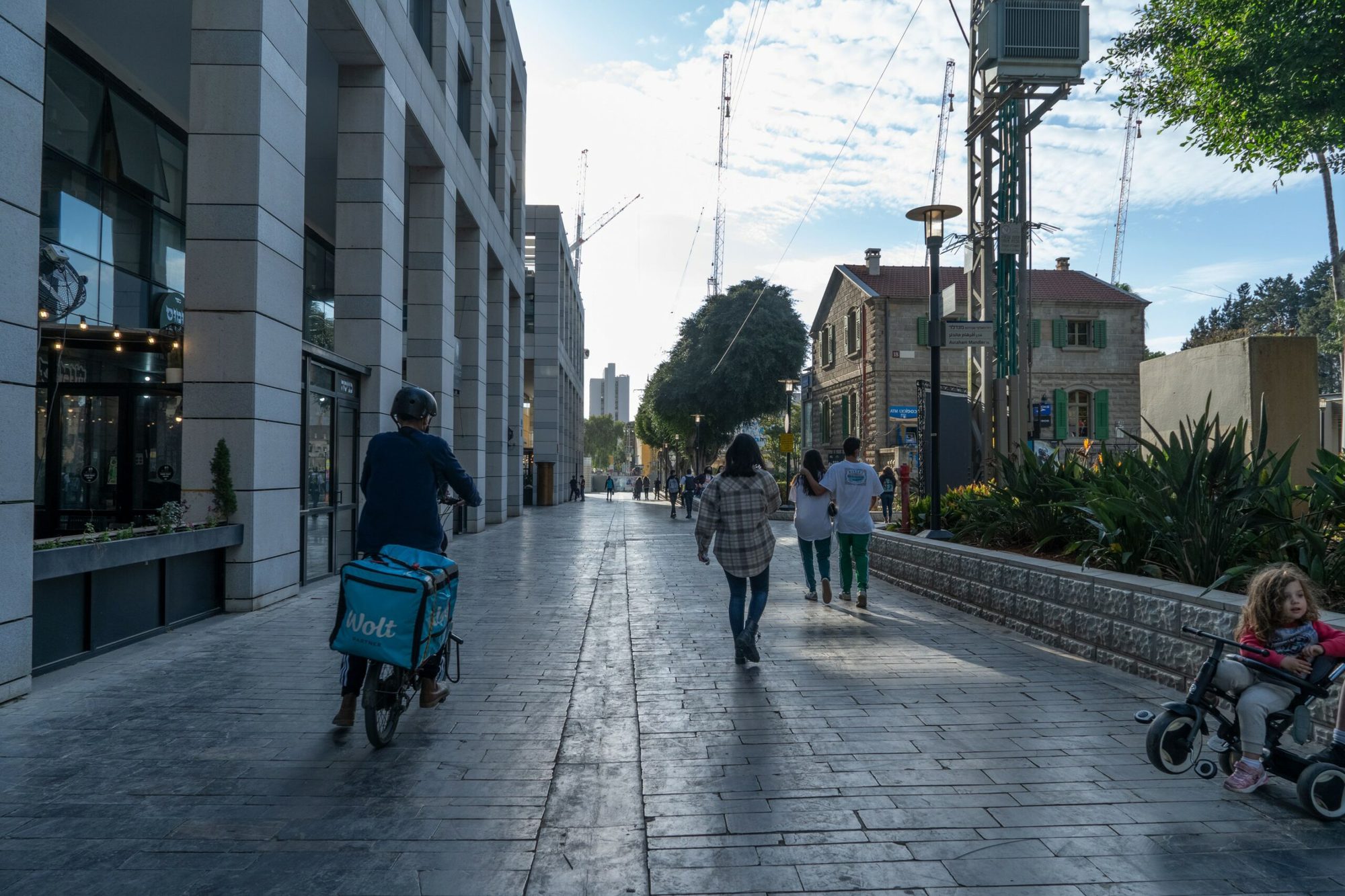 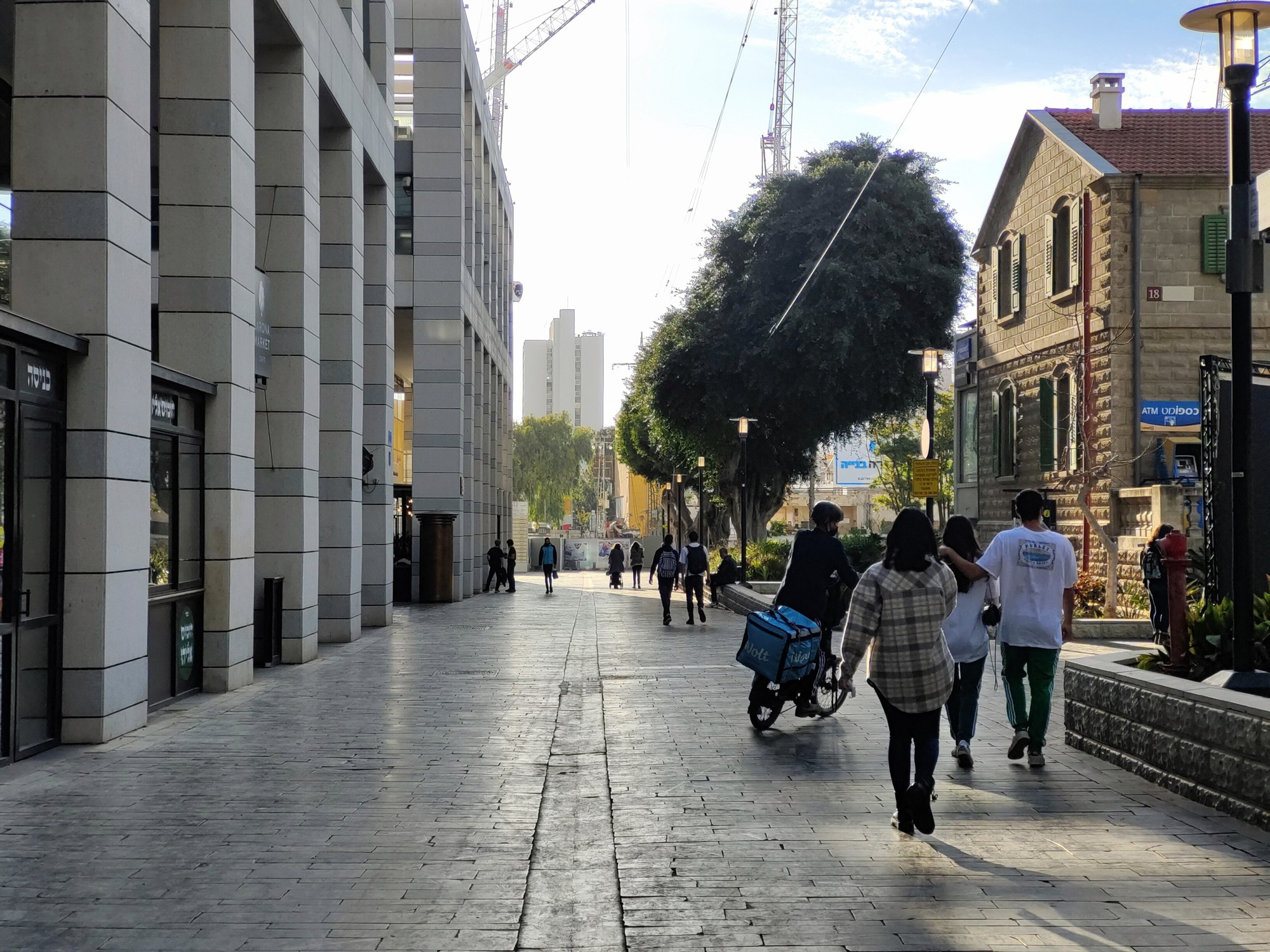 Both the sony and the Vivo performed really well against the bright background. The colors are vivid, and they both hold a nice dynamic range. This is actually quite impressive for a phone. If you look at the top of the tree, both the sony and the Vivo display some purple fringing. On the Sony, that fringing is low, so it’s easy to fix in Lightroom. Looking at the lady on the right and her jacket, you can see that the Sony has more details and more subtle contrast. Still, I am really impressed with the resolving power of the Vivo.

When taking a standard photo, you can also opt for PRO MODE, which gives you control over ISO shutter speed and white balance. It also enables RAW shooting, but you have to use the full sensor’s three-to-four ratio. The file is kept in DNG format, and you can tweak the standard settings in adobe photoshop. Sadly, though, you can not take a 50-megapixels raw. This kinda makes me think what the “real” resolution of the sensor is.

I also wanted to test the camera with some portraits, and this I did in portrait mode, which allows you to use 35mm or 23mm lenses. The portrait mode does have some nice features and impressive eye tracking. It’ll even track the closer eye to make sure that the portrait is sharp where it should be. Here are some samples: some with the “bokeh mode” turned on, including one BIOTAR bokeh.

Compared to the Sony, we see that both cameras show a decent bokeh and pretty good on subject sharpness. But if you unleash the Vivo computerized bokeh, it becomes very impressive. The bokeh looks like actual circular bokeh and not just a blurred background. 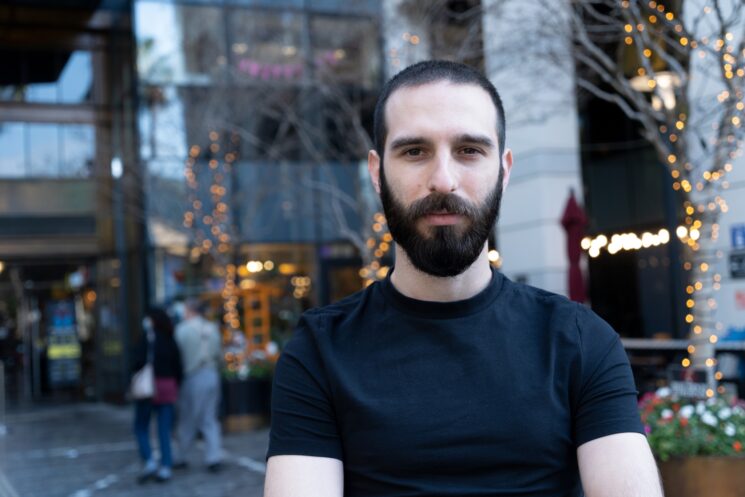 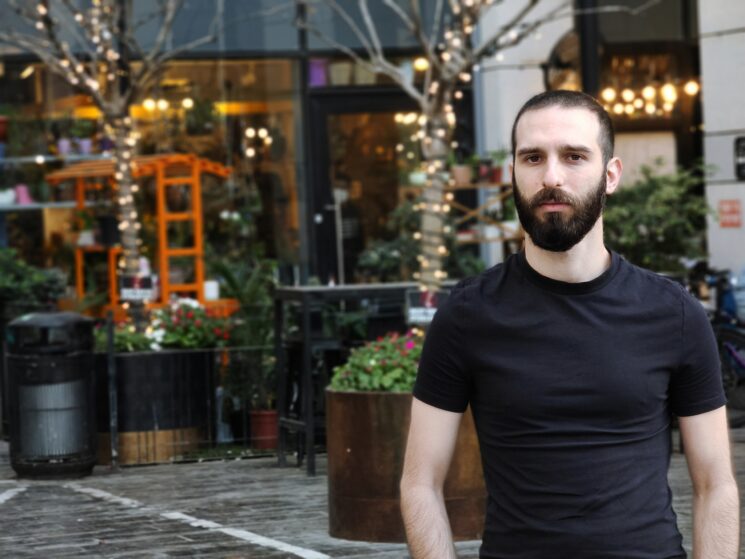 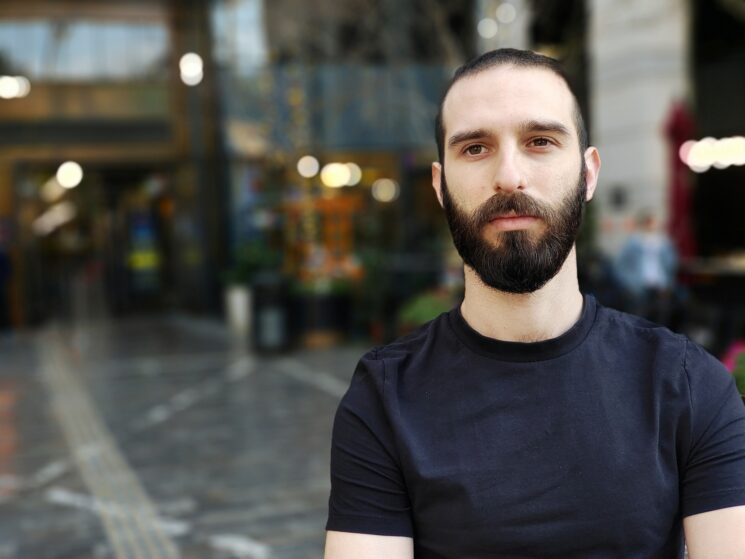 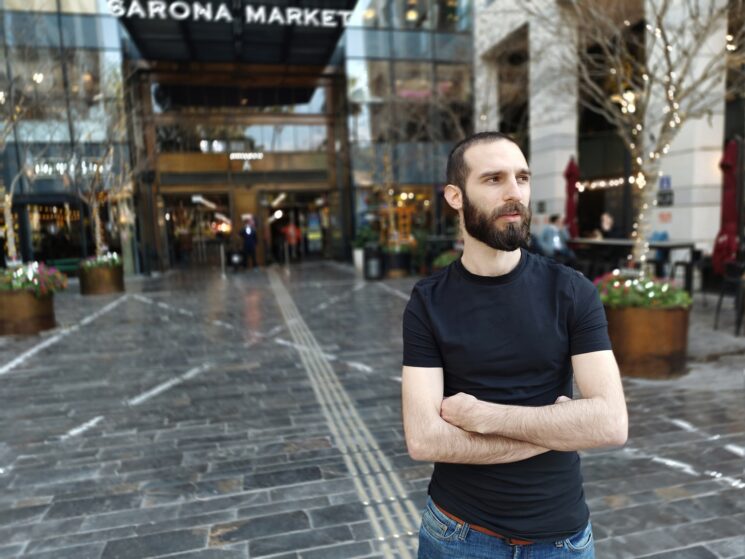 Then comes the periscope camera, and you can zoom all the way to 115mm. This is an actual optical zoom with the lens array built vertically into the body of the phone. You see the front element, but the rest of the lenses are tucked away under the phone’s back. The closest we can get with the Sony is 70mm, but cropping the image, gets us pretty much at the same framing, so let’s compare these two portraits. Sony on the left – you can definitely see the benefits of a bigger sensor here. 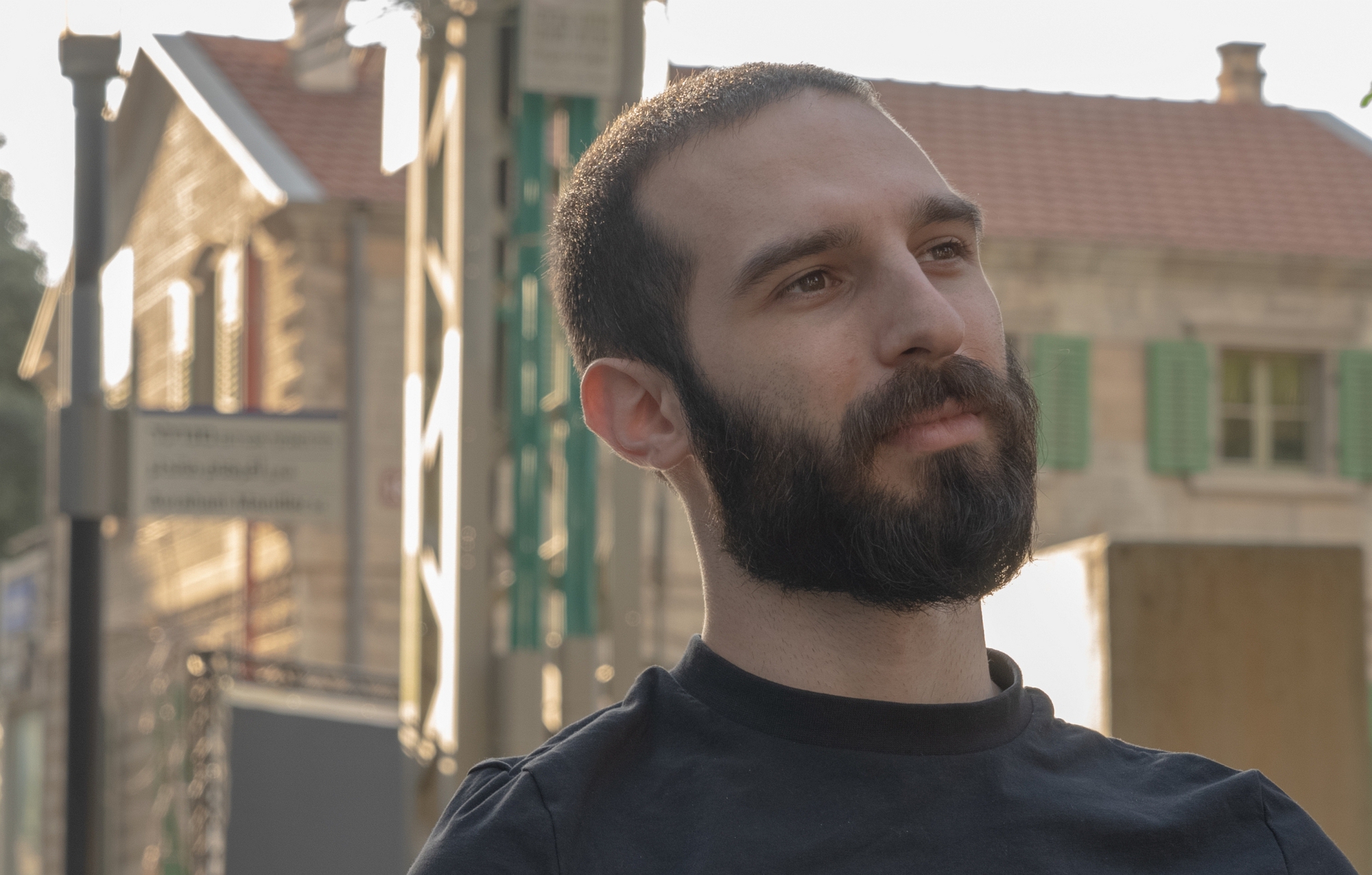 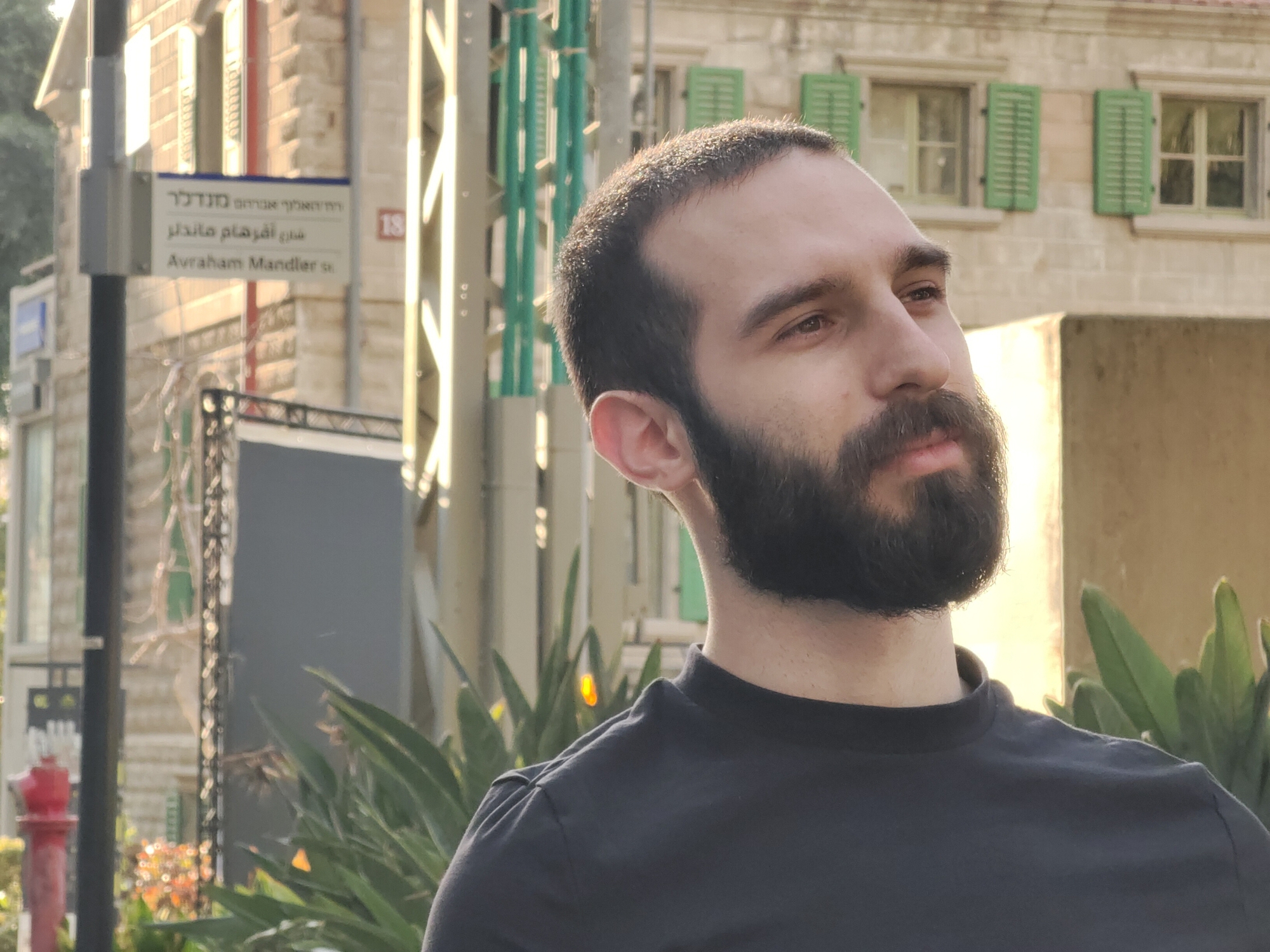 According to Vivo, the lenses are coated with Zeiss’s secret sauce. T star coating. Let’s compare a photo taken with the sony and the Vivo against some harsh lighting conditions.

What can I say? I’m impressed with the Vivo. Even though it does not hold against the Sony, there are clearly more details than I would have expected from a phone. Some of the details are blown out, like the building in the back. But if you look at the reflections on the floor, it actually preserved most of the texture.

The highlights bloom more on the Vivo, but that’s not necessarily a bad thing. (Sony on the left again) 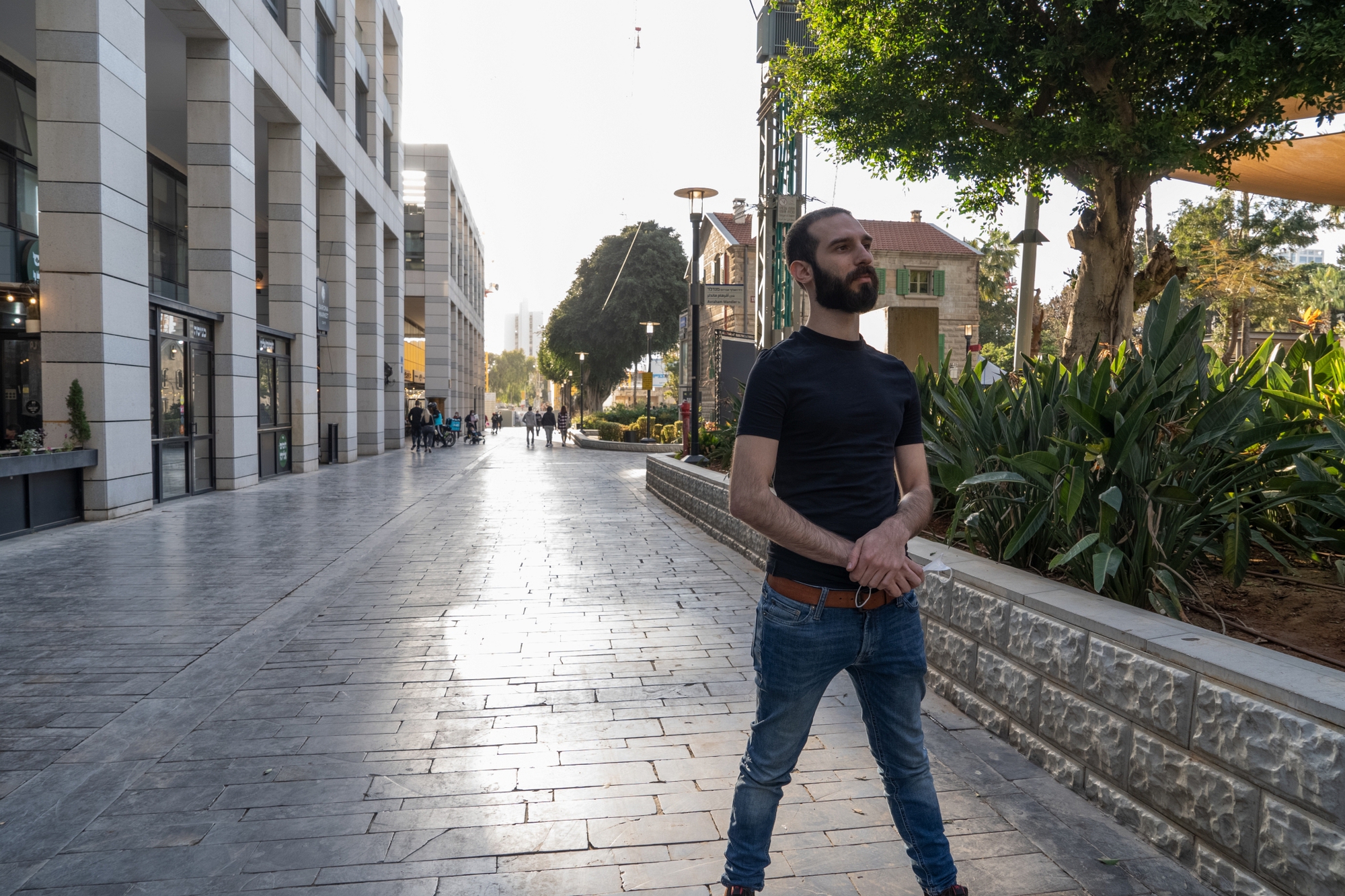 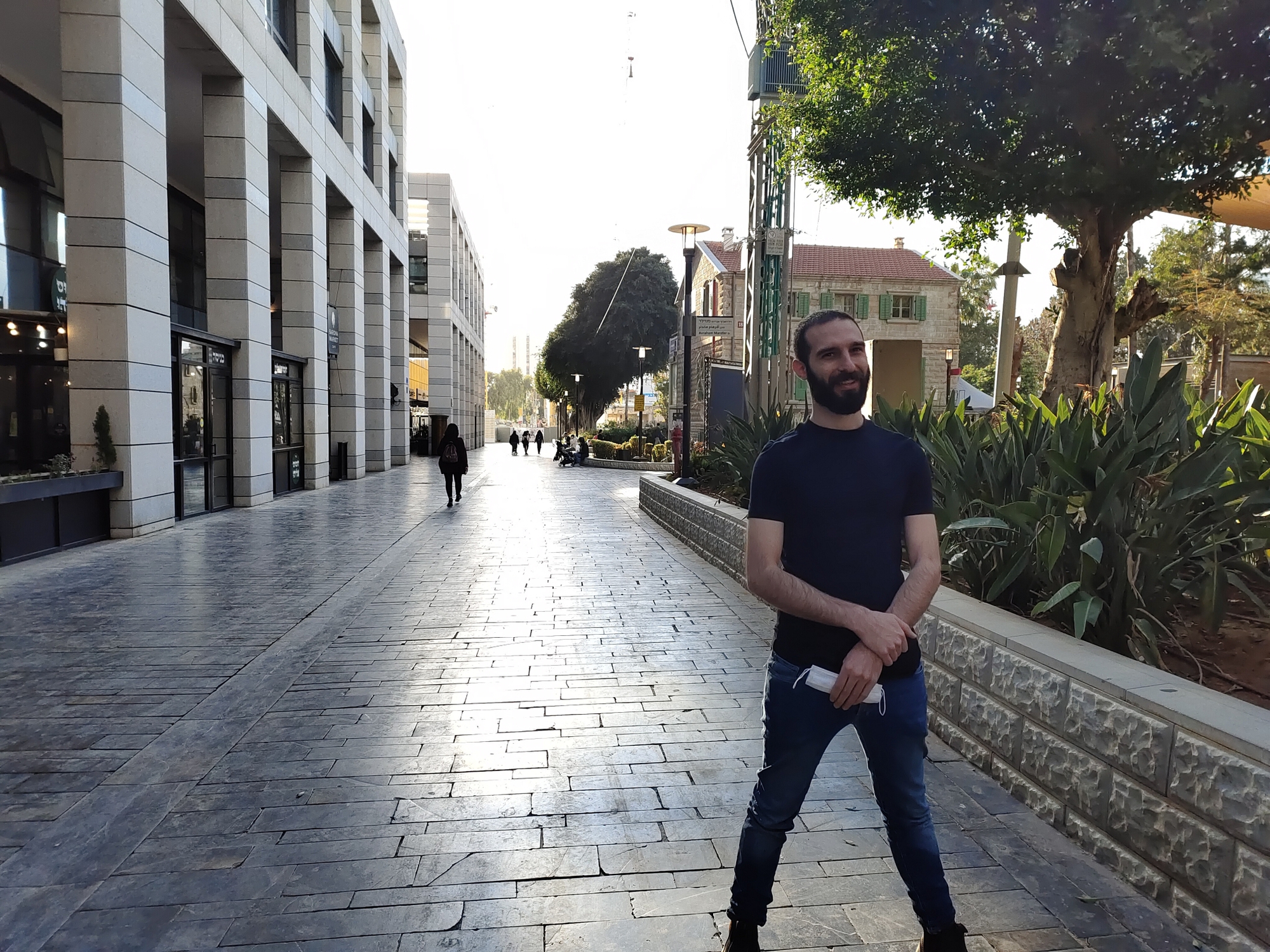 Next up is low light. For shooting regular low light images, the Vivo is OK, not DSLR-OK, but it’s ok. The magic happens when you shoot cityscapes or stars. Even on a cloudy night, the Vivo outperformed the sony at F/4. It takes a series of images and stacks them together. The algorithm accounts for star rotation and even the cloud movement to create a pretty impressive photo. Surprisingly, It could even find stars that we were unable to see with our naked eyes.

Here is a standard low light comparison (Sony on the left) 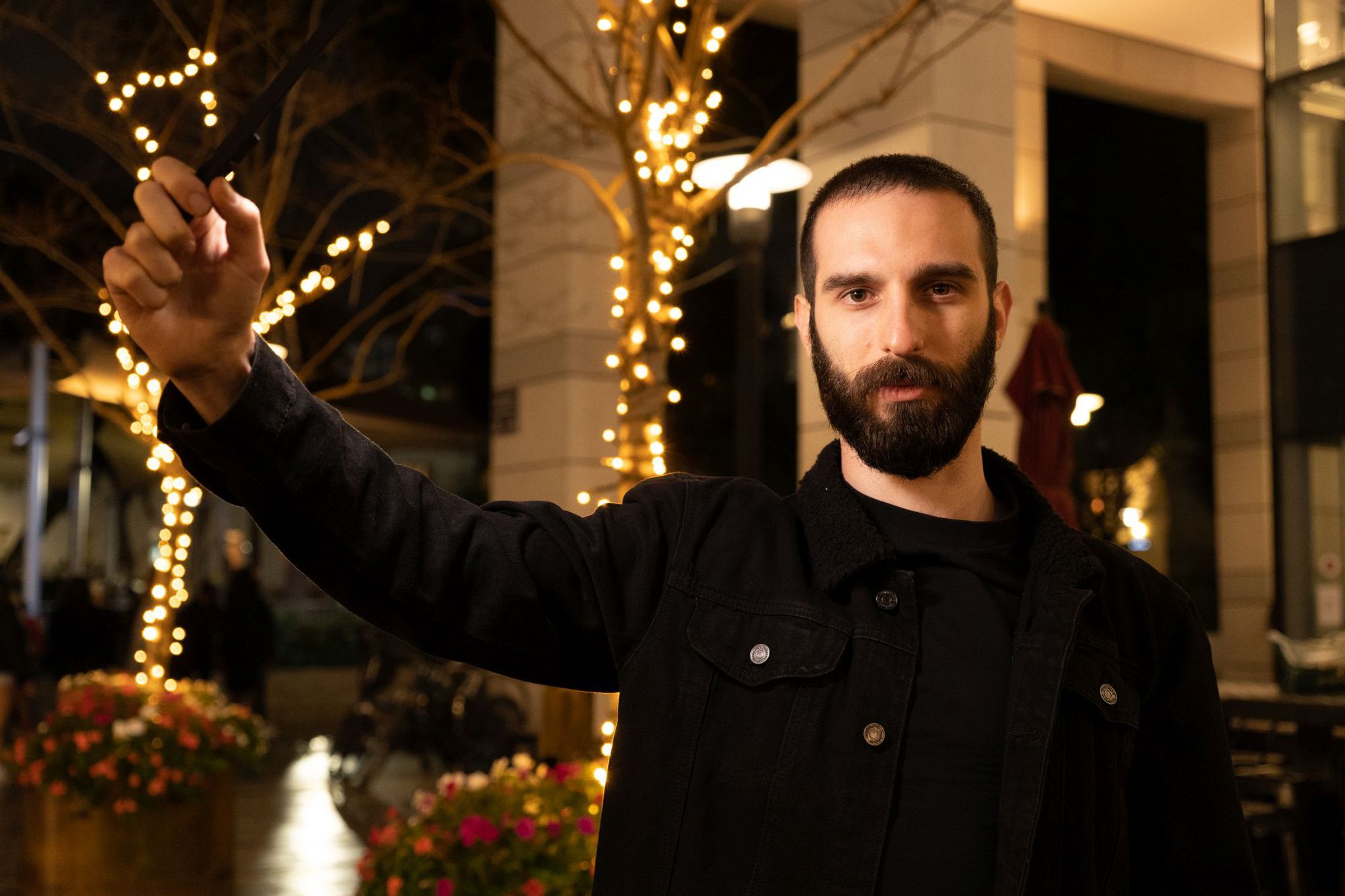 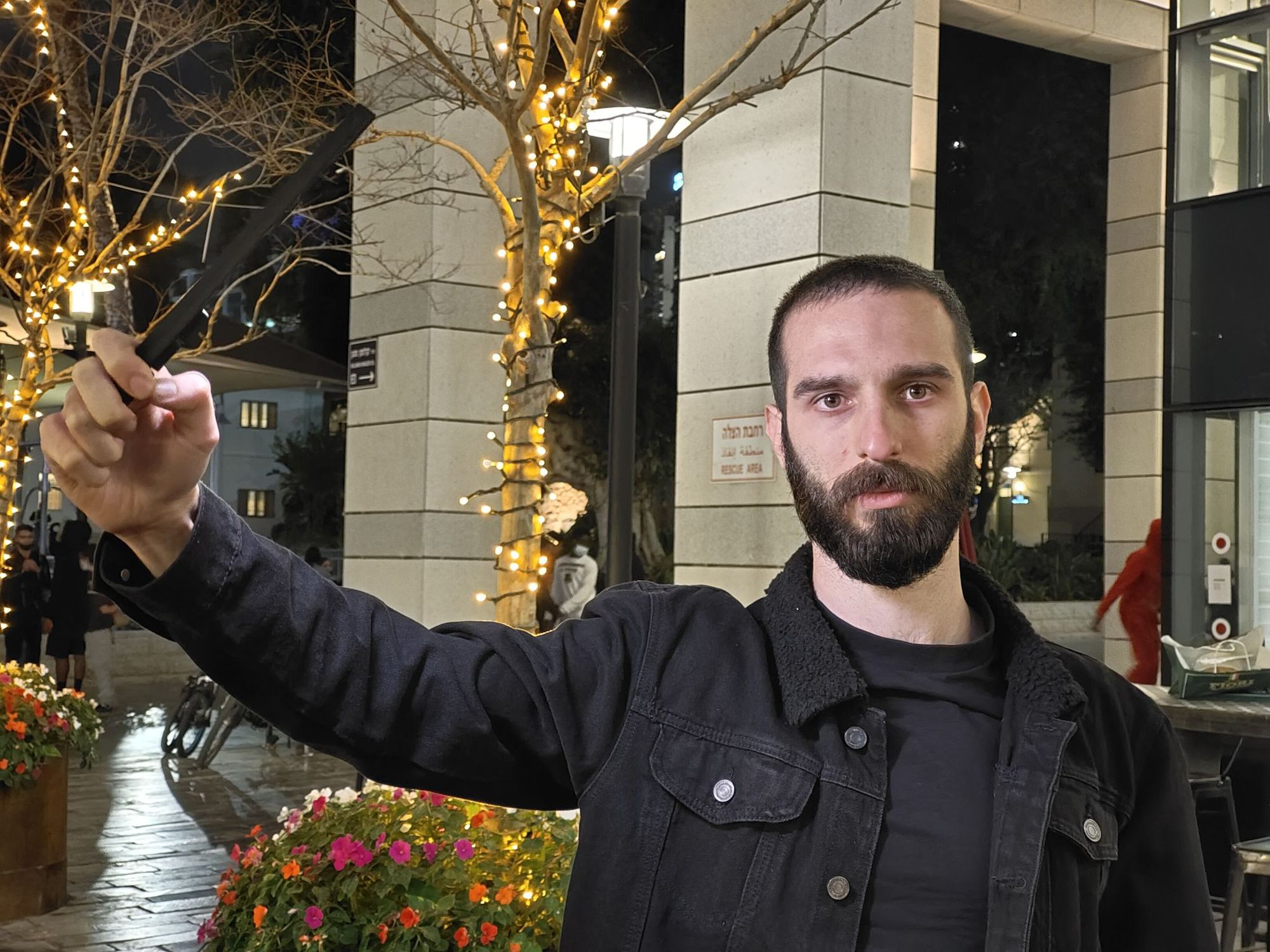 And this is a quick look above the stars (Sony on the left): 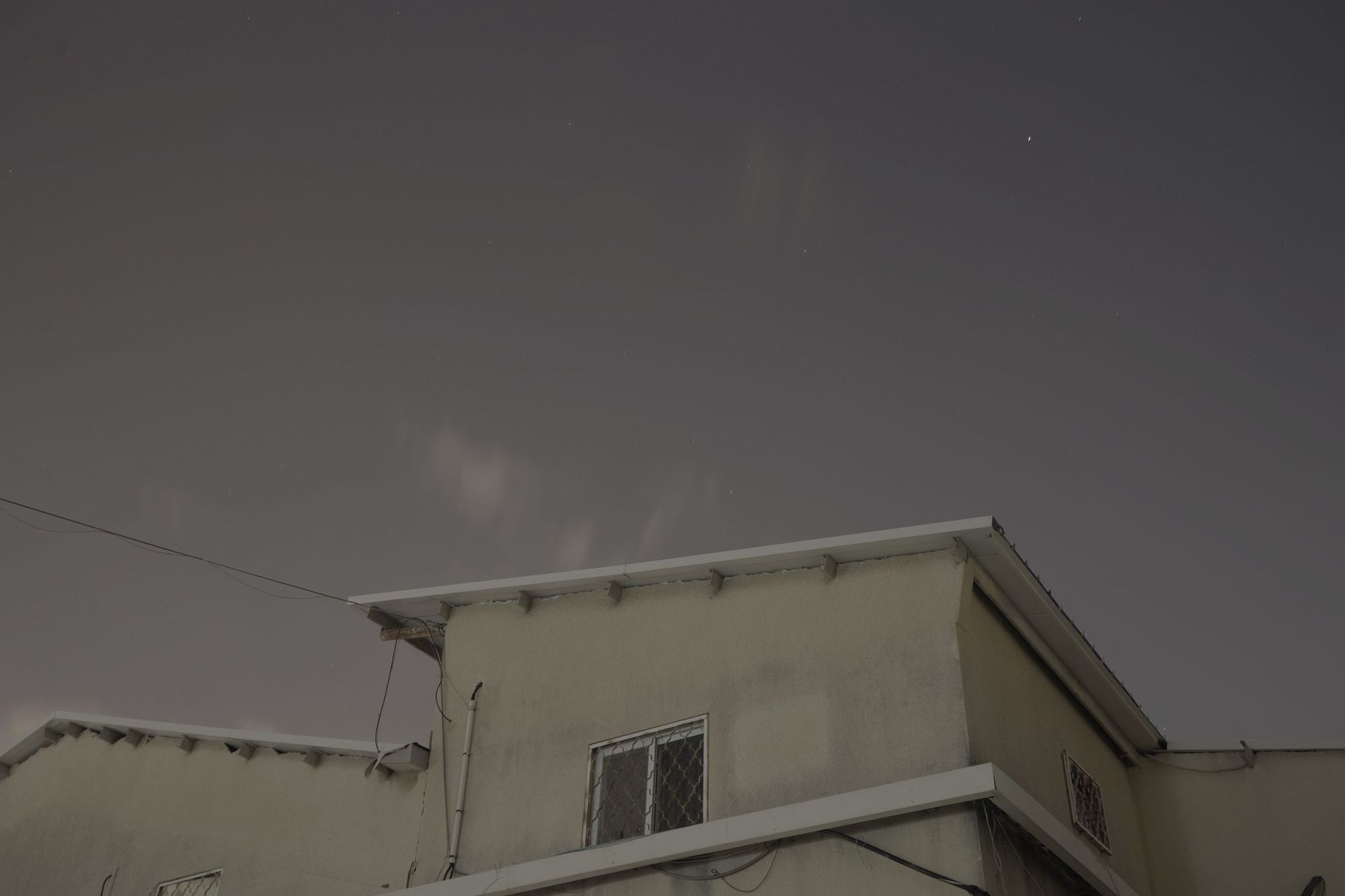 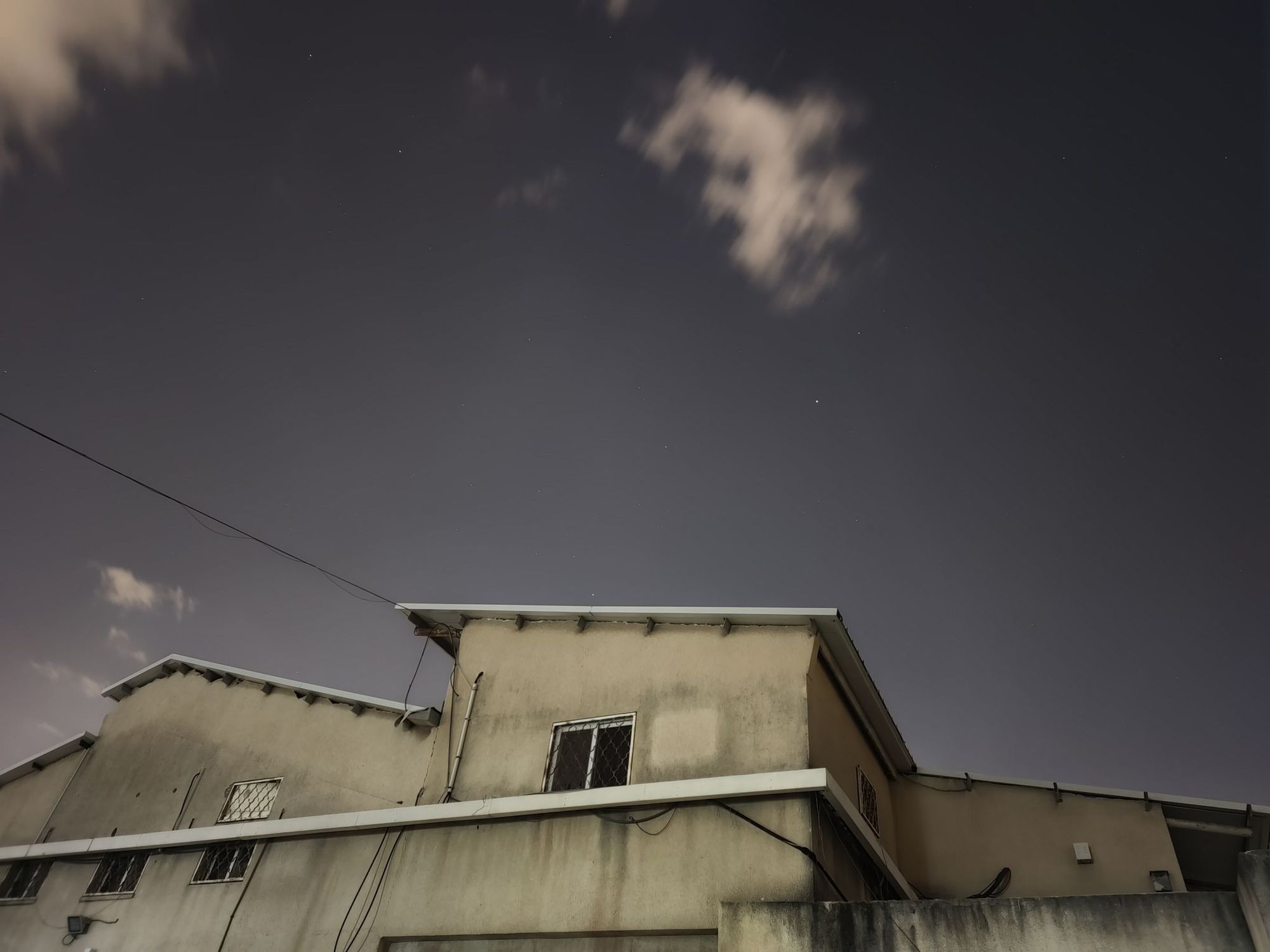 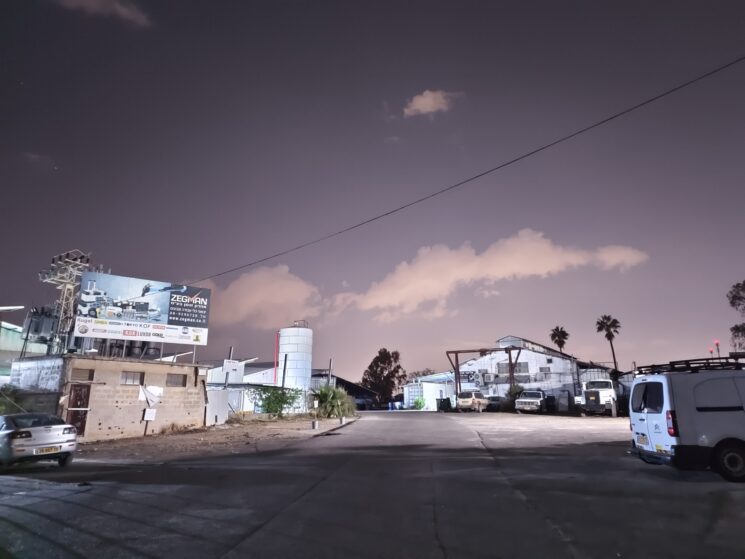 Back in the studio, we wanted to compare the phone’s macro capabilities with a real macro lens. The Laowa 100 Macro. I was blown away. This little phone gives a macro lens a run for its money. It gets insanely close and looks awesome. You can still see some softening, but the fact that it can shoot that close is very impressive. (Laowa on the left) 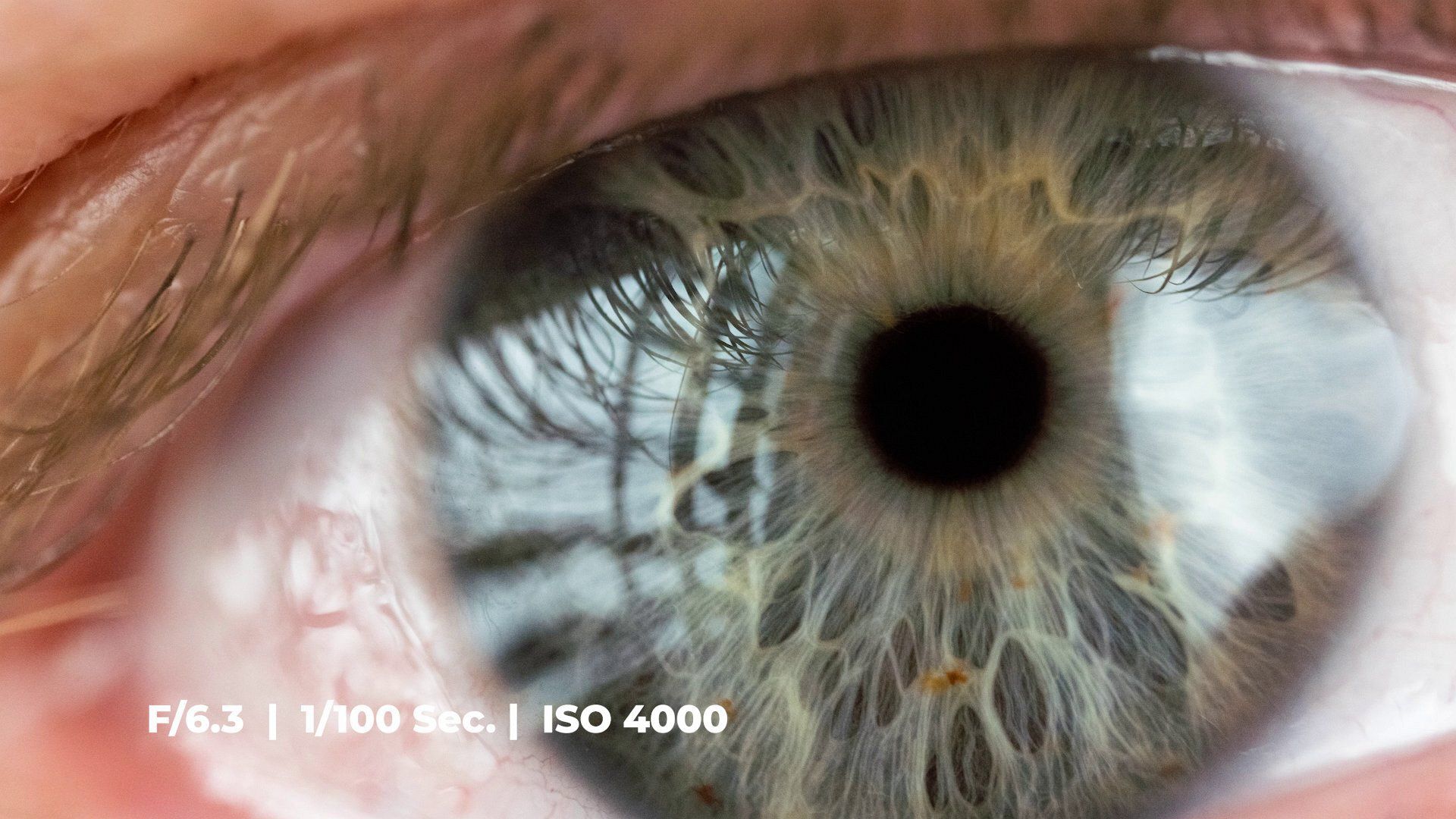 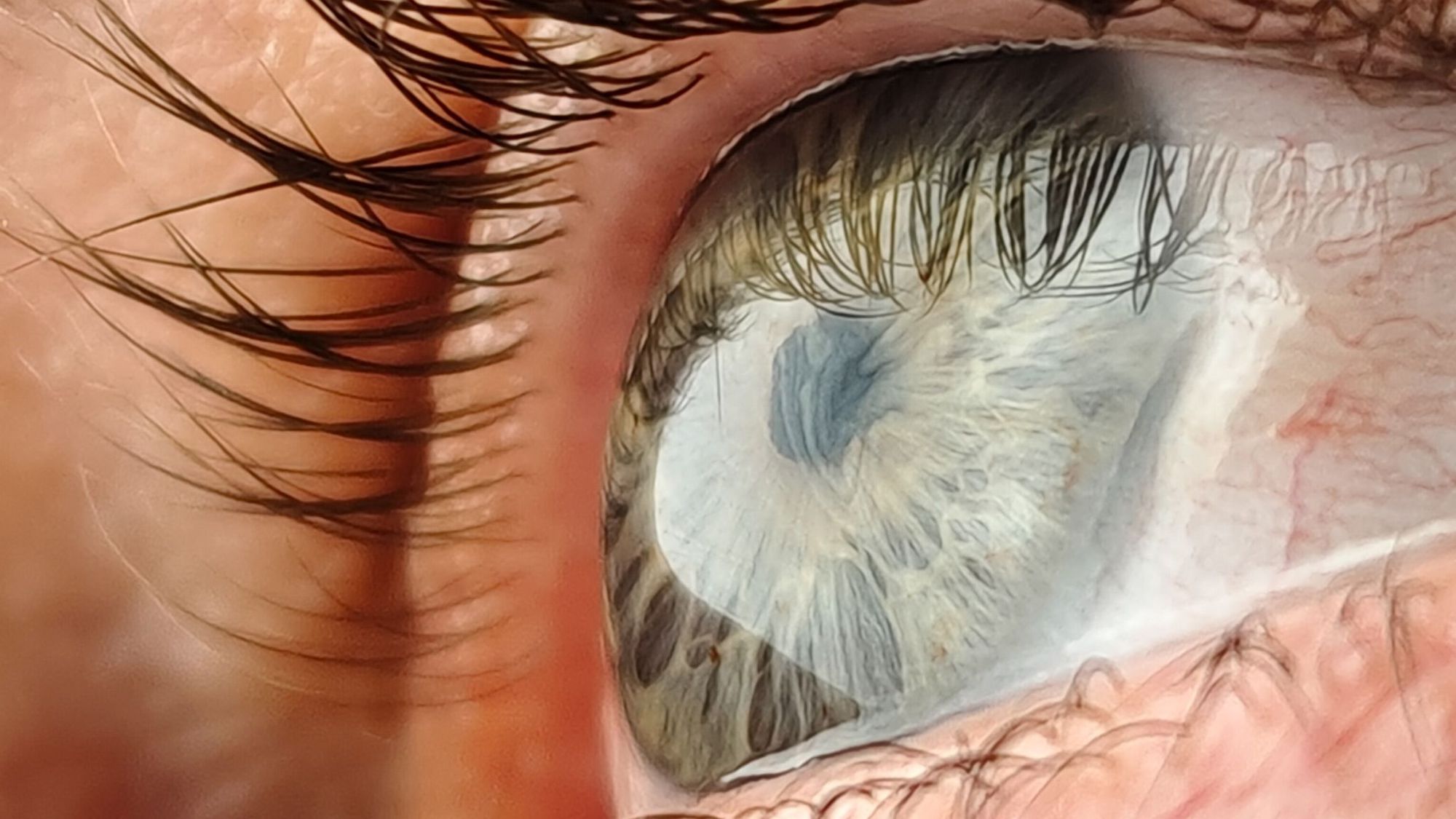 One of the most “attractive” features about the video here is that the Vivo can shoot 8K videos. While the resolution here is impressive, the quality of the video is nothing to write home about. It feels more of a marketing gimmick than something you would use. Given that the raw file from the camera is only 12 Megapixels, I think that this 8K feature is done in a computerized way. 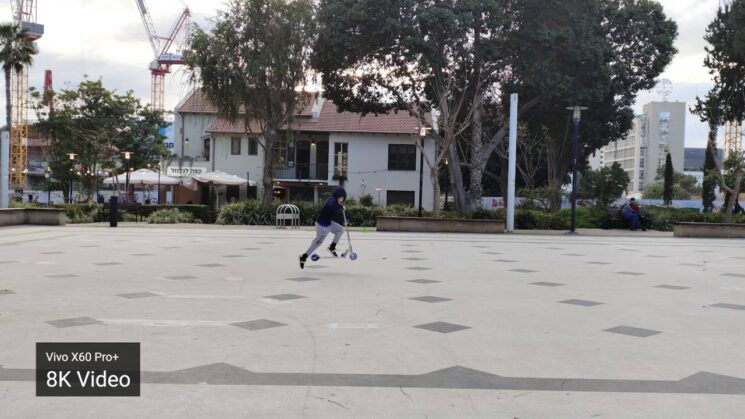 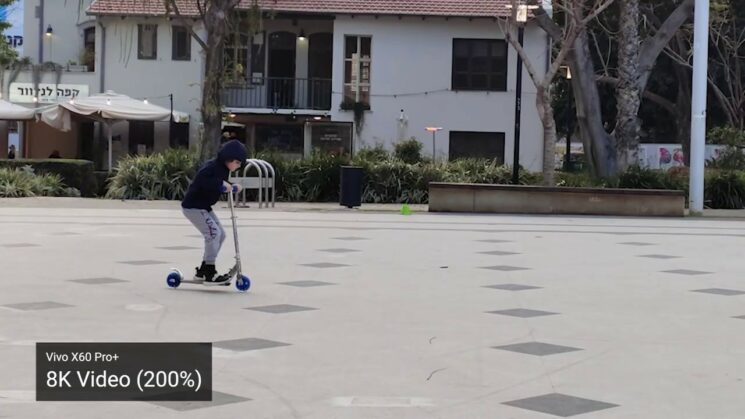 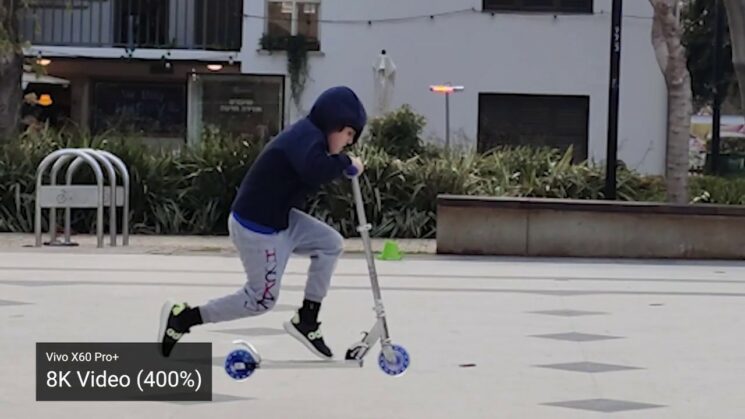 For slow motion, the Sony takes the lead. The Vivo does shoot decently slowed down videos, but there’s some form of compression going on, and it looks far less impressive than the regular video. This is very noticeable when comparing the slow-motion footage to the Sony filming at 100 fps at 100 Megabits.

An interesting feature of the Vivo is its built-in gimbal on the wide-angle camera (show calibration). The Sony, on the other hand, has an internal IBIS. We shot two quick videos of our model. The Stabilization on the Vivo knocks the Sony right out of the park.

Lastly, I wanted to check the video under low light. Here is what we got with the sony at 1080 with a 100 megabit rate. When you compare it to the Vivo…. To be honest, this isn’t really a fair comparison. Sony is a low-light beast, and we’re shooting this at ISO 8000. I would say that the Vivo is ok for sharing with the family, but not really usable beyond that. 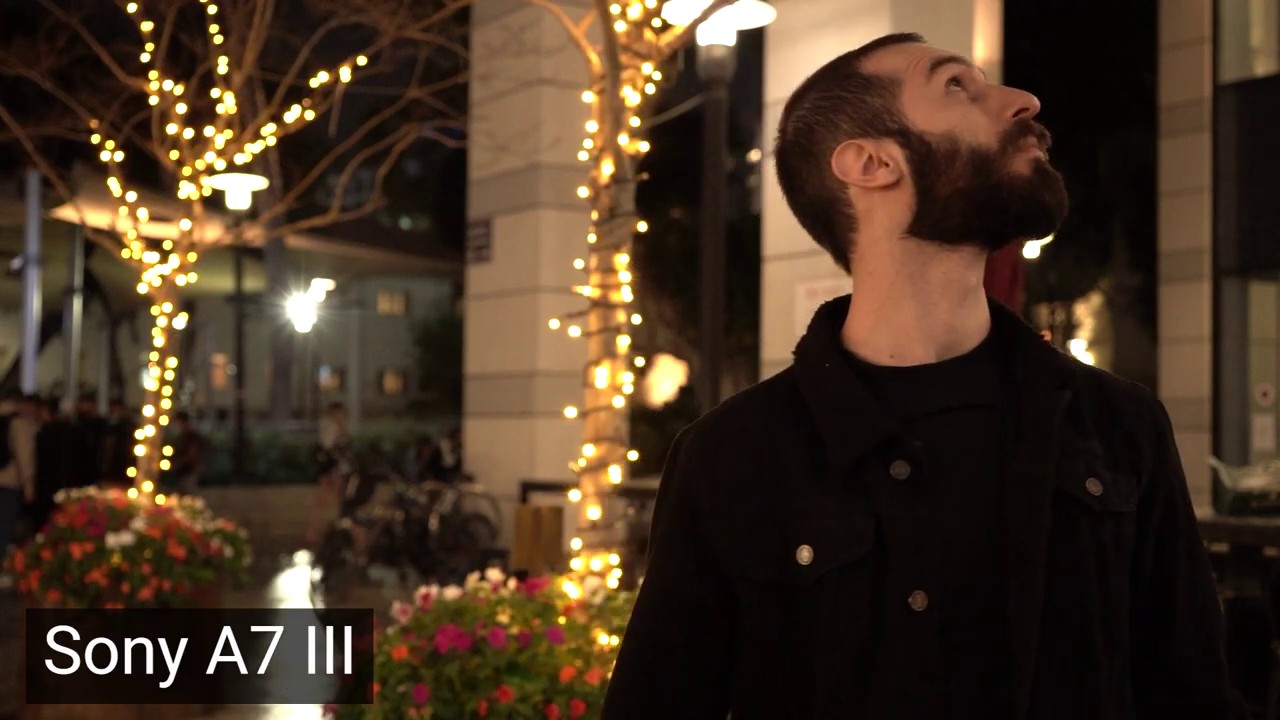 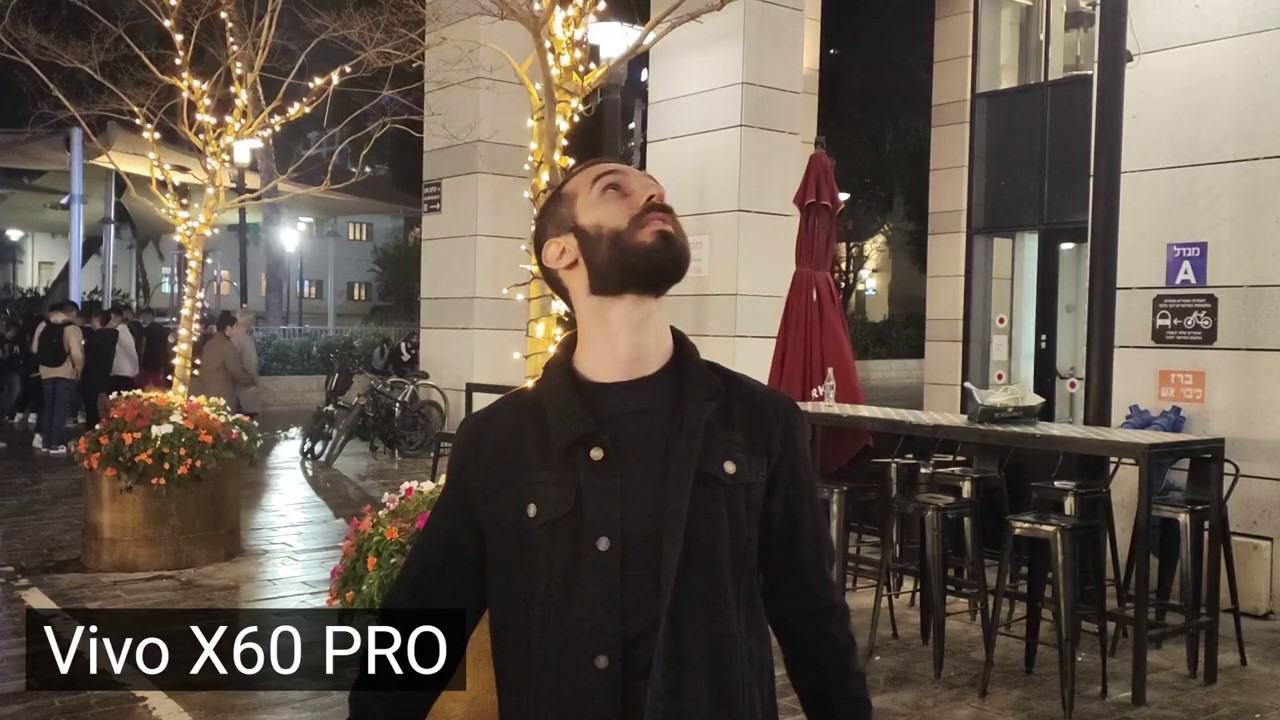 One nice perk is that the Vivo can shoot with the newer H.265 codec, which saves about half the size of the file. Here are two 10 seconds videos with each of the codecs. The Vivo only comes with 128 or 256 Gigs of internal memory, so small file sizes do have their advantages.

It is not surprising that the Sony is out-performing the Vivo. If you look at a full kit, it is bigger, more expensive, and it is a device specifically made for taking photos and videos.  The most surprising thing here is actually that the Vivo is even in the running. We’re at a point in time where it actually makes sense to take a phone and a camera and expect the phone even to compete. I can definitely see how the combination of improved lenses and image processing will pose a threat to traditional cameras in a few years to come. You can buy the Vivo x06 pro plus for $1,099.99 on Amazon.

« Is the content on your Instagram feed food or poison?
Inspiration is NOT everywhere, here’s where you find it! »