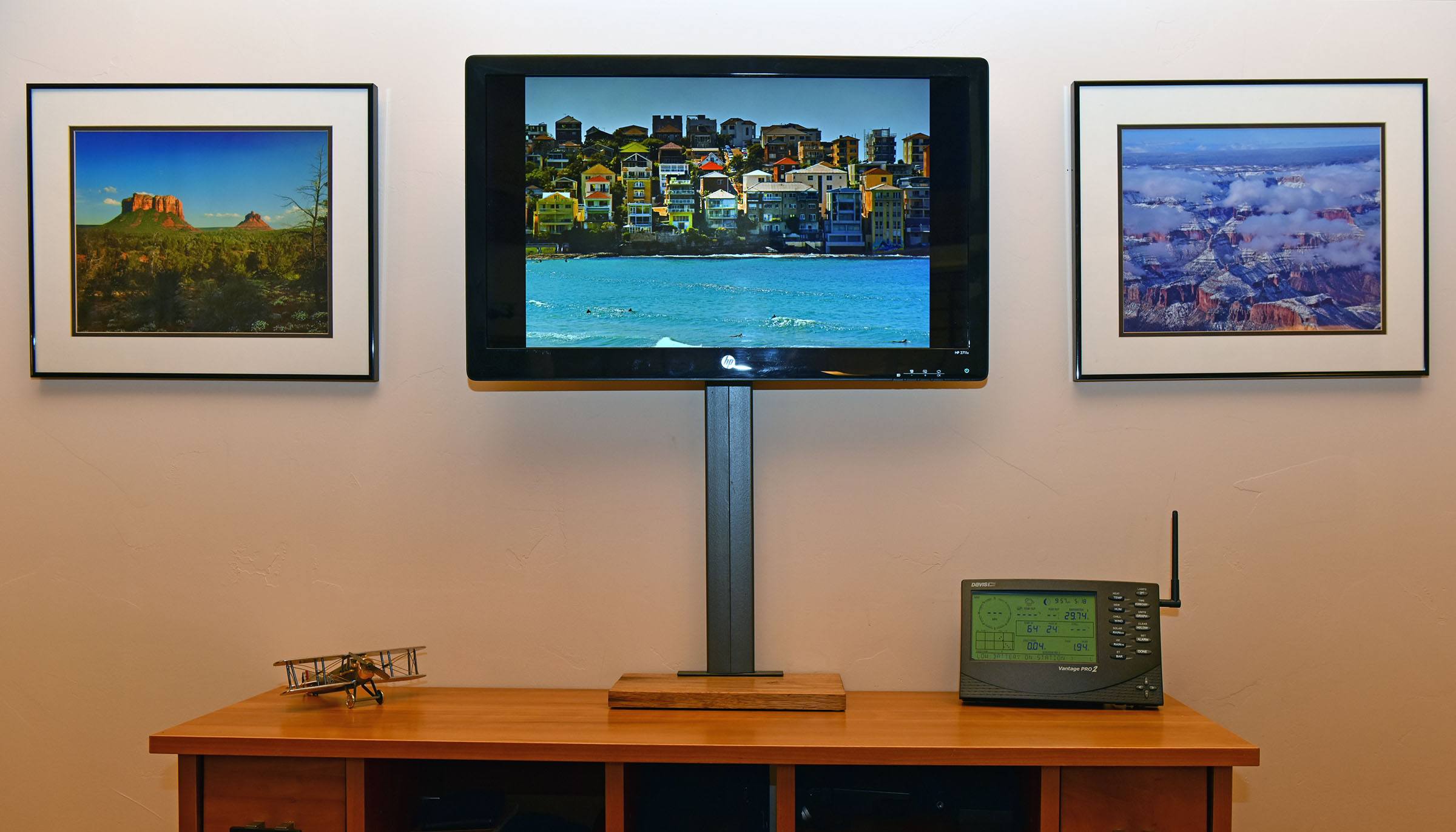 Most of you who read this web page take copious amounts of photographs. Unless you have unlimited wall space and a massive ink budget along with paper, you most likely only print a few. Generally, I only have wall space for about 3 prints on the wall of my office. I tried changing them up frequently, but this led to near bankruptcy. Seeing that printer ink for my R1800 runs about $36,000 a gallon, roughly the price of a gallon of gasoline in the year 2116. That coupled with the printer seemingly to be constantly craving ink of one color or another between nearly every 16×20 print. So I needed to make something to display the pictures of my entire photo library. Most digital picture frames are tiny little devices with limited onboard storage. I needed something bigger and with a lot more storage. Lets face it, modern digital cameras take pictures that require more memory than an old system 360 IBM had (and it took up the entire 5th floor of the Math Sciences building at UCLA). This is not a truly innovative idea, but the execution is to repurpose a technology device at the end of its lifespan. It also solved a design flaw in all the digital displays; a cord has to get to them with power and signal. So unless you like to poke holes in your walls to route wires this may be a solution.

Onto Craigslist I went. I found an old Mac Mini, Intel version, for $25. It worked, had a small by today’s standards 50gb hard drive. Since I have Macs I have keyboards and mice that work with it as well I didn’t have to spend any more. Then I found a 20” Samsung monitor with a cable for an equally low price of $25. So now I have the basis for a quality display system. I liked the Mac Mini for this project since the screen saver built in with OS X has features like a Ken Burns effect. It also allows me to upload more pictures via my network, rather convenient. The Mini is also small enough to hide under a shelf, the floor, on the wall and so on. All you need to do is put the pictures you want displayed into a common colder, I use the Pics folder. Then in the System Preferences, under Screen Saver, designate the folder you put the photos in as the source of screen saver photos and select the display options, Ken Burns, Tiling, order of showing and duration of view. Pretty simple. 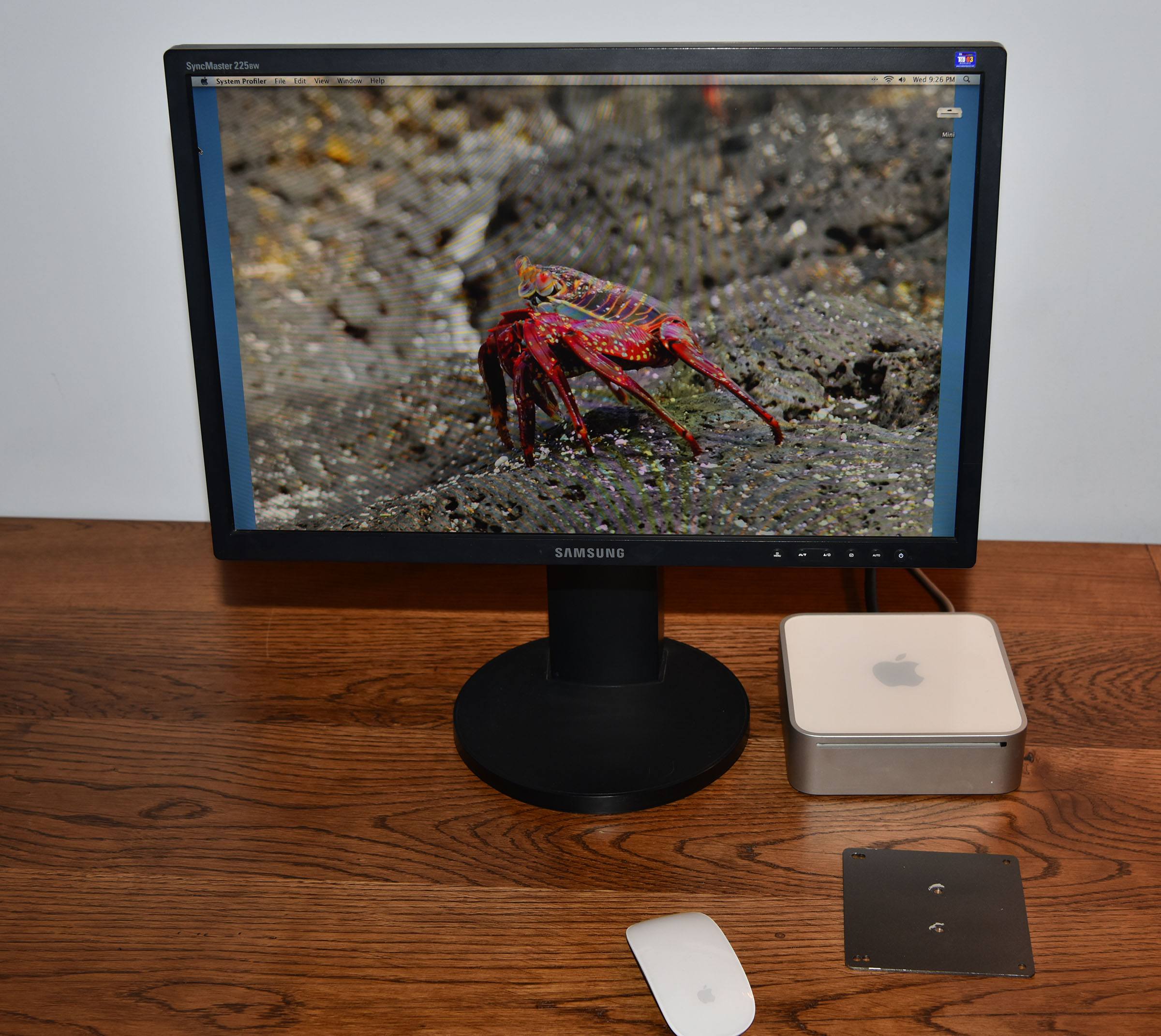 So I set this up in my office on top of my office credenza, with the monitor propped up to get in the middle of my prized pictures. Proudly, I showed my wife. Who immediately pronounced it, ugly. Monitor stands are not things of beauty and tend to be rather short. They also do a poor job of hiding cables. So back to the drawing board. Since I recently taught myself to weld, I had a nice MIG wire feed welder and a lot of practice scrap to work with. I figured I could make a thin and attractive, well not ugly, stand of the proper height.

First off, the Monitor was too low, so it needed to be higher. Most wall mount solutions leave the cables dangling from the monitor and seem to cost more than the entire system was worth. They also seem to offset the monitor quite far from the wall. Besides, I may want to move this around. So I settled on using two longer pieces of old bed frame cut to length and tack welded together to form a ‘C’ channel. Besides supporting the monitor, it hides the cables. This is welded perpendicularly to another piece of the bed frame (which is essentially angle iron). It was trimmed on one side to fit flush on the back of a piece of scrap oak, stained to kind of match the furniture. The metal was painted with Architectural Bronze paint, also to match the furniture. I also made a versa mount adaptor from some scrap sheet aluminum. Most eBay/Amazon outlets want a ridiculous amount for a plate with 4 holes in it, called a VESA adaptor. I call it a rip off. 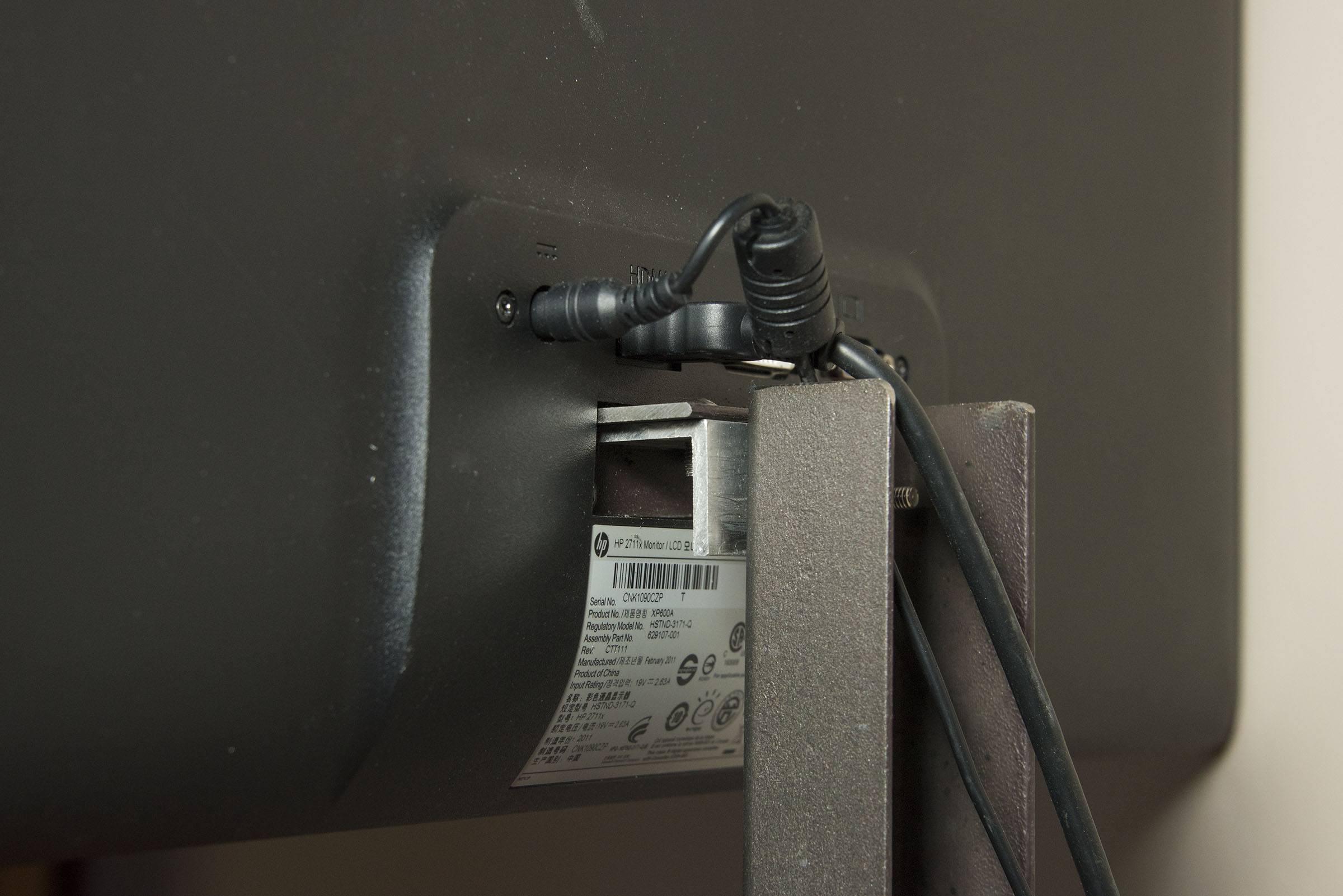 This ended up being quite pleasing and cheap. Really costing about $75 if you count the paint and materials used. The bed frames are virtually free if you pick them up from a charity thrift shop. They just want them hauled off. Choose the older style ones, they are made from decent quality steel. You could buy metal from the likes of Home Depot already in channel form, but at a huge premium. They tend to charge in excess of $10-15 per foot for steel angle iron alone. If you have an industrial metal supply in your area, they change less than $.50 per foot for the same material, but you have to buy it in 16’ lengths. Still ends up being about a third less than the box stores and you will have spare metal, lots of it, for future projects. I simply drilled a couple of holes in my now channel and tapped the holes for 10×32 screws. I then screwed the cheapskate’s version of the VERSA adaptor plate to the channel and it to the monitor. 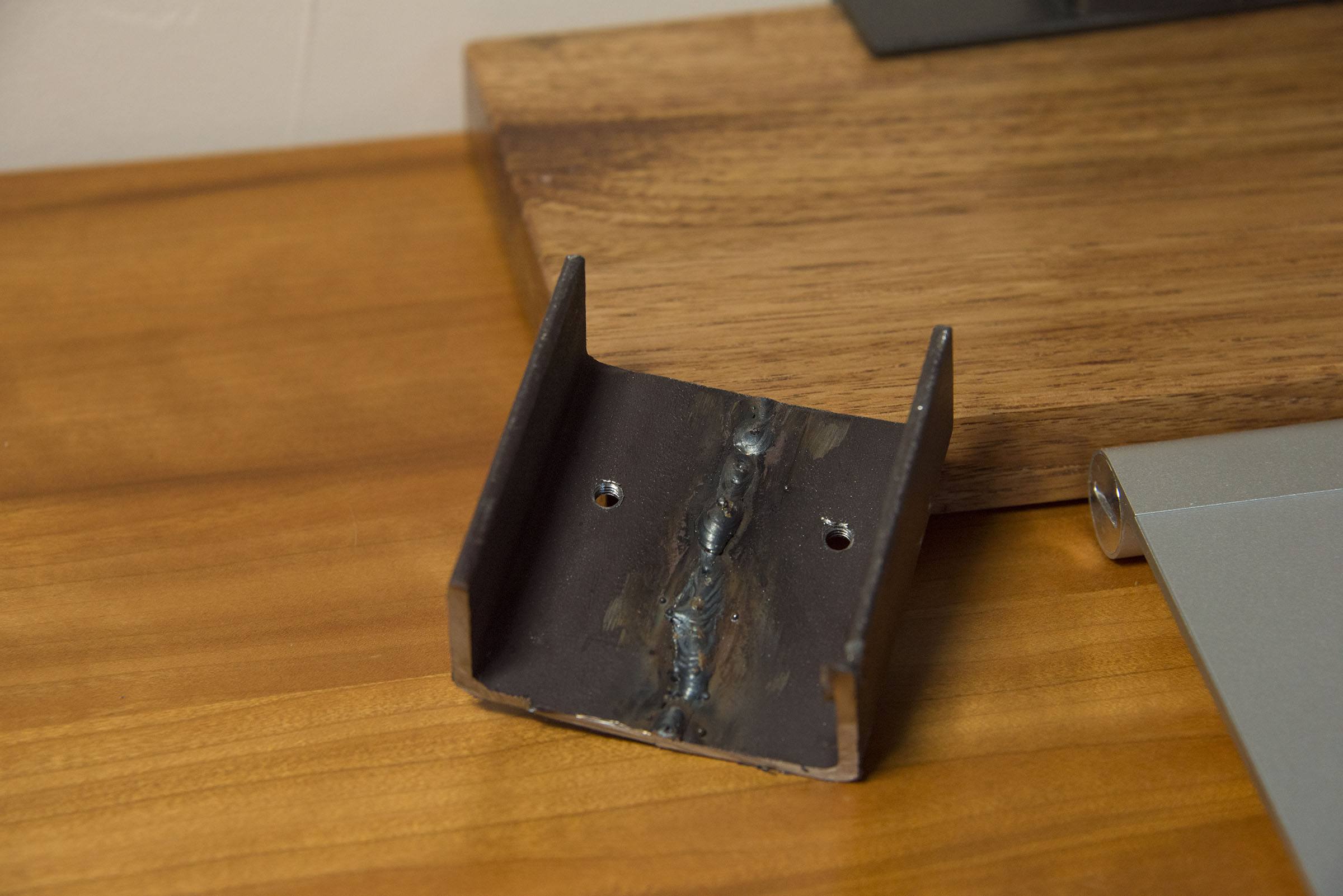 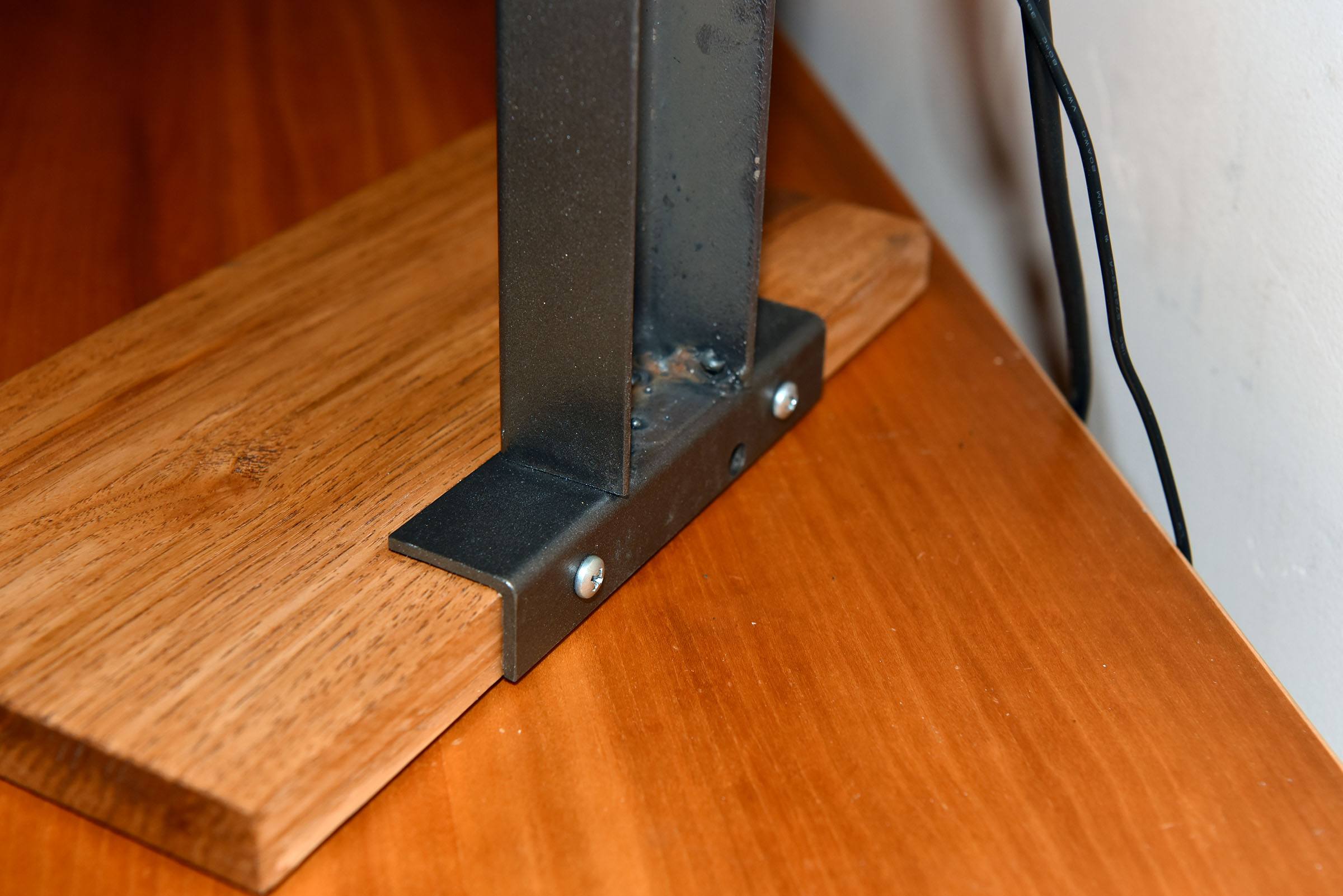 I kept this as it was for around six months. However patience on Craigslist is a virtue. I found a 2012 model Mac Mini with a huge, comparatively, 27” HP LED display for only $300 for the pair. The LED display, aside from being 30% larger, has a much greater viewing angle. The Samsung monitor suffered from color shift and contrast changes when viewed more than 20° off axis. Not exactly what I wanted. Great though, if you like the 60’s solarized effect on every picture. So hacksaw in hand I actually had to shorten the mount to put this larger monitor on the base. I was looking for a late model Mini for the future upgrade to 4K video. At the moment monitors at this level are a bit expensive and using TV’s for this actually does not look very good. TV’s seem to have poor contrast and color rendition, even after calibration. So sometime in the future I may find a 4K monitor and use it instead of the present HP monitor. 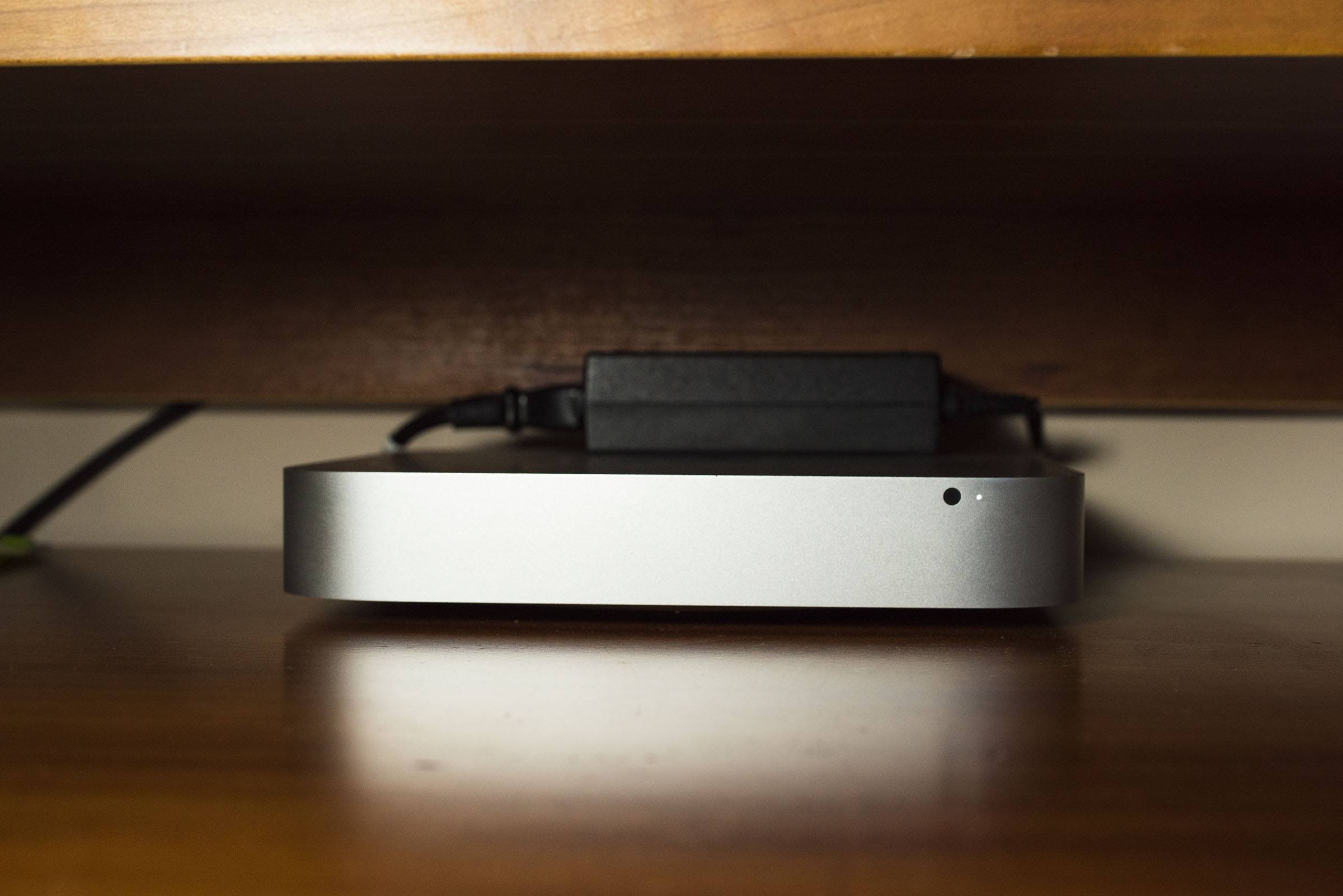 The New Mac Mini, which is an i5 has one other virtue. You can use it as a media hub in addition to the duty as a picture display unit. I simply added a massive 4Tb hard drive to it with a nauseating amount of old movies and TV shows ripped from the city library to stream to my Apple TV’s. While this may have seemed like an Apple fanboy project, it could be done with any old Windows laptop or small computer (just not Vista, it would constantly crash). I just liked the convenience of the Apple products compatible with my existing computer selections and media display options. All could be done without any additional software or any special computer knowledge. The older Mini is indeed the bargain to be had, but later models can be purchased with some patience, either on eBay or Craigslist at an acceptable price. The old ones will do 1080P (1920×1200), which is as good as any non-4K monitors will do at the moment. The office now has a reasonable sized display unit, I have a media server and the older Mini has found a home downstairs, displaying pictures in the family room. Not to beat Apple’s drum to much more, but one other side effect is the library is also accessible from your, if you have one, Apple TV. So any of your connected TV’s can display your photographs as well.

Now I have a way to enjoy some of the thousands of photographs I have taken over the years. Reality, the system cost about as much as making 100 prints, not counting any frames. One can adapt the idea to fit your décor using different materials, but the basic idea of re-purposing older computer equipment to display your photographs is the point.

How to Build A Back-lit Vintage Photo Display

Kids Science: How to Build A Huge iPhone Display On The Cheap
« Lensbaby President talks about the company past, present and future
This 200x zoom camera lets you read the writing on airplanes »