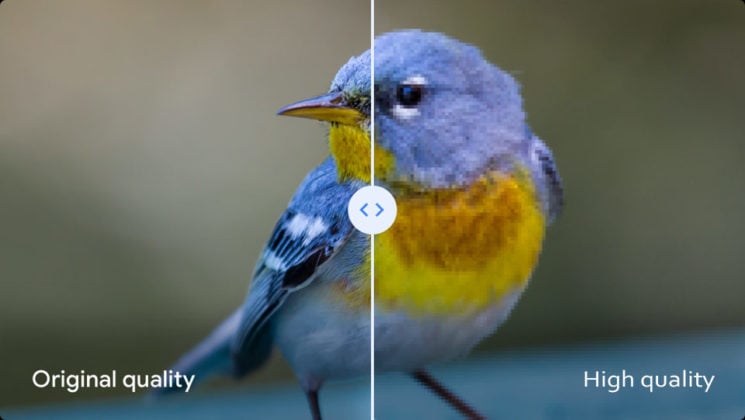 Google has reportedly sent out an email to Google Photos cloud storage users promoting they eat up their 15GB of free storage and buy into the paid accounts by uploading Original Quality images instead of letting Google create its High Quality versions of images, showing a rather drastic comparison image to argue their case.

The argument is at odds with statements made when the service launched in 2015, that its High Quality images offered “near-identical visual quality” to the originals. With Google having recently taken the decision to end its free unlimited photo hosting, one can’t help but think that this is simply gaslighting to get more money out of people for Google One subscriptions that don’t really need it.

The image apparently included in the email, shown at the top of this post, portrays a drastic difference in quality between the “original quality” and “high quality” versions of the same image. A difference that just doesn’t seem to mix well with reality, as this PhoneArena article from 2018 comparing original jpgs to Google Photos’ High Quality versions of the same images illustrates and presenting massive storage savings in the process. These examples back up Google’s original claim that they offer “near-identical visual quality” at much smaller file sizes.

Google’s High quality images are limited to 16-megapixels for photos and 1080p resolution for video and until June, they’re still free to store on the service. Original quality images, however, even if they are the same resolution as the HQ versions are significantly larger in file size. And with many phones shooting video at 4K rather than 1080p, those are obviously much larger files, too – all of which will be eating into your 15GB of free storage, and possibly exceeding it, after the deadline comes.

In 2015, the 16-megapixel limit was fine, because there weren’t really any mass consumer smartphones with resolutions higher than this back then. These days, though, with 108-megapixel sensors becoming common (even if they are quad-or-more-Bayer sensors that ultimately composite down to a lower resolution), that’s a heck of a difference – although, still nowhere near the quality difference illustrated in the image Google sent out.

Sure, Google is well within its rights to stop its free service and start a new paid service to replace it at any time it likes. That’s not in question here.

But what is a bit dodgy, in my opinion, is to trick users into filling up their free space, forcing them to buy into the paid service – especially when the vast majority of smartphone camera users will likely see no difference in terms of image quality between the two formats of drastically different file sizes.